"Investigation of a Citizen Above Suspicion" (Criterion) 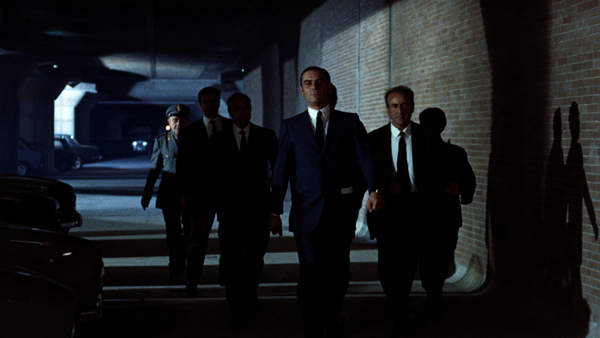 Elio Petri's 1970 picture is a pretty nifty cross between an all-out satire and quasi-giallo. Here a retiring top cop (Gian Maria Volonte, the Marxist movie star who really gave his all when portraying the corruption inherent in the system) commits a very deliberate murder and hands his colleagues the case on a silver platter. Their reaction provides the main satirical thrust, which is directly related to the Italy of the late '60s but also transcends the immediate circumstances. The presentation—as with all new Criterion packages, this is dual-format, including both a standard-def disc and a Blu-ray—is outstanding, showcasing a very handsome 4K restoration that splits the difference between gritty doc-style grain and color in the interrogation rooms and gilted glamour in the flat of the murder victim. The remarkable supplements provide thorough crash courses in both Petri and Volonte. Not just an education for the adventurous but a top-flight entry in the '70s paranoid cinema subgenre. —A 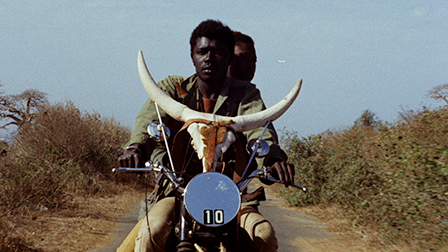 I cannot tell a lie: as of this writing I have only gotten through four out of the six films in this amazing package. I'm still rating it as essential viewing and absolutely ownership worthy, as a culmination of really painstaking and conscientious preservation and restoration efforts, for one thing, and for its impassioned but entirely non-imperialistic or condescending presentation of cinema from cultures that are genuinely distinct from our in the U.S. This is as much a celebration of difference as it is of universality. Also, now you can finally see the elusive-in-the-U.S. Senegalese picture "Touki Bouki", a staple of international critics' polls and an absolute, uncategorizable stunner. (Although be warned, sensitive types: there is an awful lot of environment-specific animal slaughter in this movie.) What's most fantastic about the selection here (the other films include "Redes", a 1936 Mexican picture co-directed by a straight-out-of-Austria Fred Zinneman, the 1981 Moroccan music doc "Trances", "Dry Summer" from 1964 Turkey, "A River Called Titus" from 1973 Bangladesh, and the 1960 Korean thriller "The Housemaid", maybe the movie best known here) is not just the temporal span but the variety and the idiosyncrasy on display. The most pertinent point is that none of the material even fits into a comfortable "art movie" slot. More than eye-opening: Mind-expanding. Really. —A+

This 1980 faux-Amicus horror anthology, graced by the cheesiest frame story in the history of horror anthologies (see title for the concept), is rather more handsome than a picture shot by the guy who lensed "The Harder They Come" and a bunch of Peter Walker films might be expected to look. (Peter Jessop is the cinematographer's name.) Or maybe everything looks better bathed in green light. In any event, this late offering from director Roy Ward Baker reminds me of something Andrew Sarris said about Edgar Ulmer: "[his] camera never falters even as his characters disintegrate." More than the characters disintegrate here, but Baker films the proceedings with inalienable integrity. The extras, largely compiled by horror maven David Del Valle, are voluminous and rather touching in their handcrafted fashion. For all that, a horror junkie specialty item by definition. —B+ 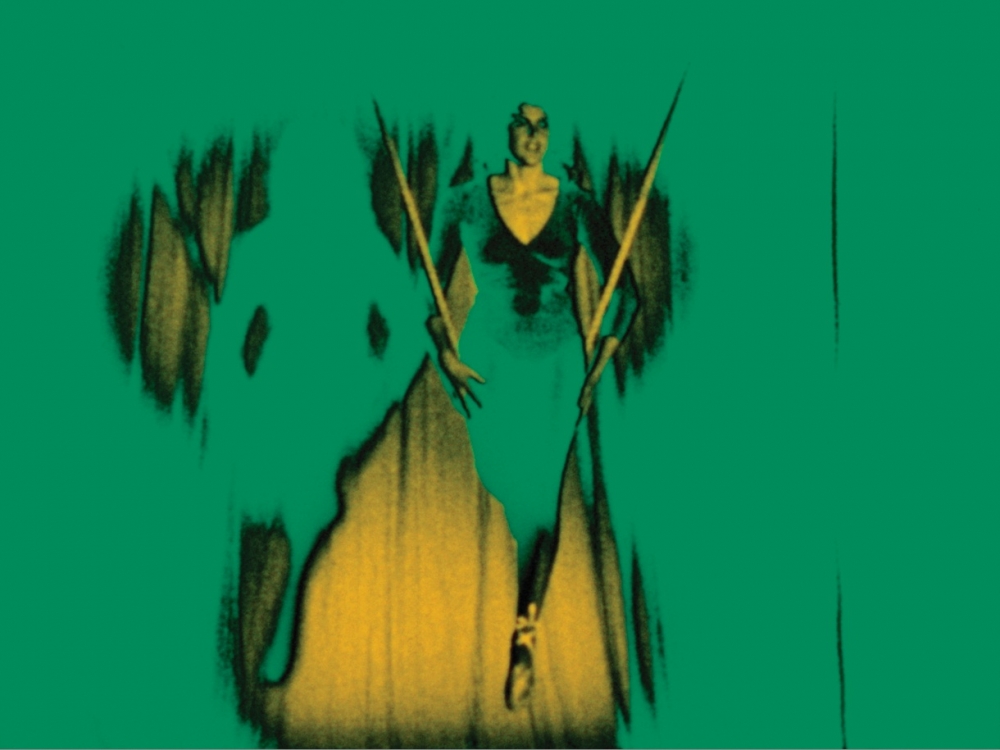 Hey film studies majors! Remember being irritated by Laura Mulvey and/or Peter Wollen? If, in fact, you were irritated by them? (I find their critical works rather stimulating myself, but I never went to film school or nothing.) Now, if you have a multi-region Blu-ray player and you feel like being superior, you have this object with which you can play "those who can't do, write "Signs And Meaning In Cinema," that I had to write that goddamn paper on." Actually, the high high modernist, hell, even post-structuralist, 1977 "Riddles of the Sphinx" is an engaging if slightly secondhand and (necessarily) academic stab at avant-garde film, and in the current context it feels like a noble almost-last-gasp that didn't know it was going to be that. Paired with a prior Woolen/Mulvey film, 1974's "Penthesilea, Queen of the Amazons", this BFI package provides an attractive window into both their theory (I love how Mulvey starts narrating "When we were planning this film" literally not even two minutes into said film) and aesthetic and of course their now bracingly radical politics. And the Mike Ratledge synth score for "Sphinx" is nifty too. I only wish that BFI follows it up with Mulvey and Woolen's Lora Logic movie "Crystal Gazing". —B+ 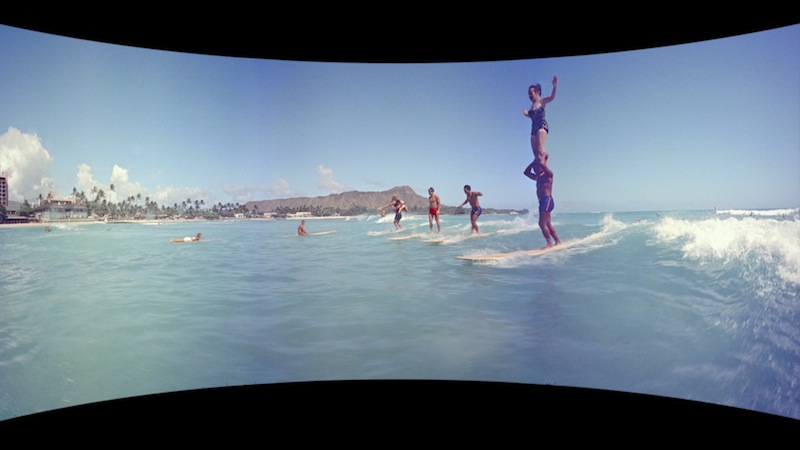 This is a Cinerama travelogue from 1956. It is compelling inasmuch as it is uncompelling. If one attends it with an active mind the main thing one marvels at is all the labor and surplus value involved in lulling the viewer into the complacency of pictorialism. But that picture detail! The scene with the 400 Tongan schoolgirl chorus, and the chorus is all there in a single shot and if you freeze frame it you can count each individual Tongan schoolgirls, if that's what you're into. The imperialism is also pretty wild, as in the rendition of Handel's "Messiah" in Polynesian. It offers a lush and overall more stable set of images than "Cinerama Holiday", some of whose shots yielded some fascinating parallax issues. Not that the technical refinement would insure a future for the format. All this and Orson Welles narration and an ocean liner's worth of extras too. —B+

"The Way We Were" (Twilight Time) 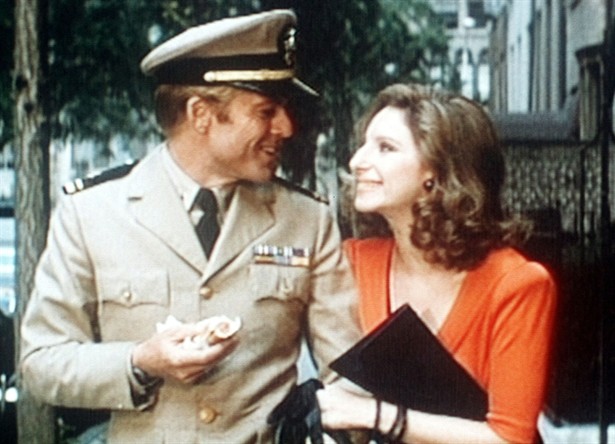 The glory days of Herb Edelman; clearly that's the main star draw here. Anyway. This 1973 romance, a kind of vestige of a traditional studio picture, is a period piece that has itself become a period piece. The disc itself is beautiful; really good color. Look at the apple sheen on the cheeks of one of the featured players, a Ms. Barbra Streisand. The picture remains exceptionally clean throughout, yielding a very burnished look. An older commentary from late director Sidney Pollack is joined with a new, enthusiastic commentary from label cofounder and film scholar Nick Redman and critic Julie Kirgo. A really attractive limited edition package. If my mom had a Blu-ray player I'd totally gift her with this. A sealed copy too—I like mine. —B+