Back To The Fanboy Well: Chiller Theatre Expo #25

A couple of months ago I got a brief and curious e-mail from an old friend, a fellow media professional who shall here remain nameless. “I’ve got a car and I’m thinking of heading out to Chiller this year, you wanna come with?”

“Chiller” is New Jersey’s own Chiller Theatre Expo, where the Tri-state-area (and beyond) fan of horror movies, weird TV, and many other things and people outré have been meeting for 25 years now. I’m an old Chiller hand: I met and interviewed Herschell Gordon Lewis at an early event back when it was held at the William Carlos Williams Arts Center in East Rutherford, N.J., when you could spot the likes of Rob Zombie and Johnny Ramone in the crowd, not as celebrity guests, but as avid memorabilia hunters. There was always something to see, whether you were there in the spirit of semi-drooling fandom or “oh the humanity!” snark. My crew and I were largely split down the middle. We knew we were weirdos, but also put ourselves on a more socially-adept portion of the weirdo spectrum than some of the other folks we’d see there. In other words, we never did cosplay. 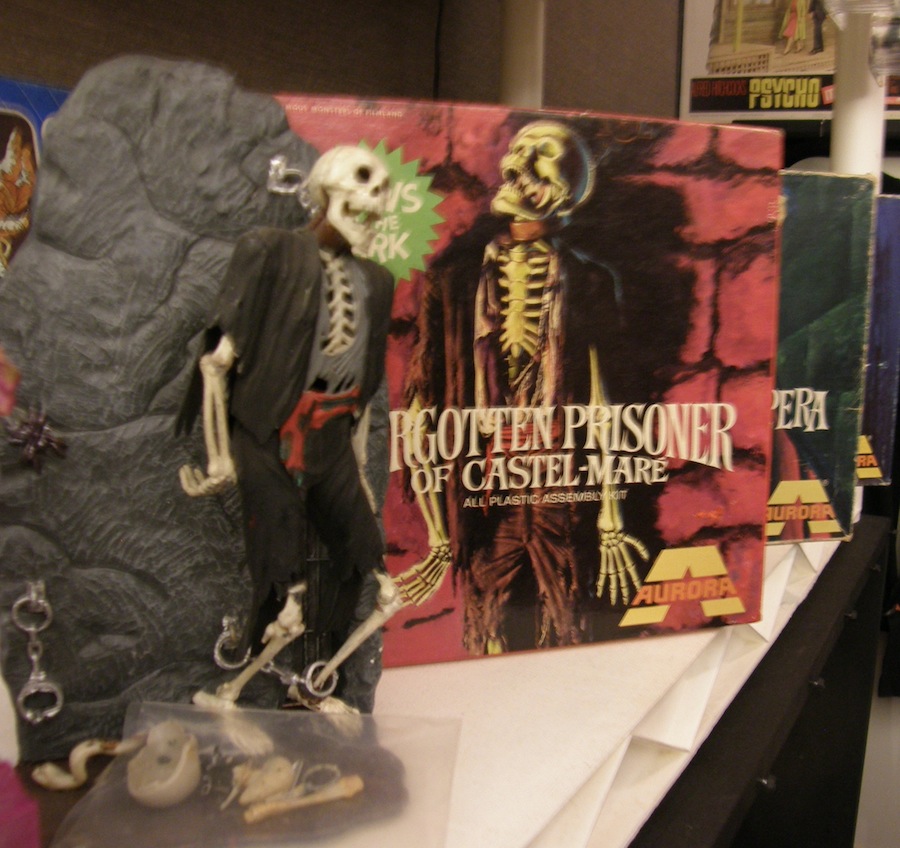 But I did go almost religiously for a good decade or so, and generally spent a lot of money, particularly with one vendor that got an incredible selection of then-very-obscure exploitation films on foreign-region DVD. And got my fair share of diversion in the guest autograph rooms, where one could meet and chat with the likes of character actor Joe Turkel (Lloyd the bartender in “The Shining;” he signed my still “Your money’s no good here”) and underrated Bond portrayer George Lazenby. The last time I went, in 2002, ostensibly to pick up a review copy of a DVD from a manufacturer who had a table as the show, I saw a huge line outside of one room. “Who’s that for?” I asked a friend. “Tippi Hedren,” he said. “Wow,” I replied, impressed. “Should we get on?”

“Why would you want to get on? You work at Premiere magazine. If you want a chat with Tippi Hedren, you can just call whoever her publicist is?”

I’d never thought of it that way. But once the con moved from Secaucus to Parsippany, after I’d moved farther into Brooklyn, there seemed even less impetus to go. Also, in the intervening years I’d gotten married, and, arguably, “put away childish things” to a certain extent. But my buddy hadn’t been out there in even longer, so rather than question him as to why he was going; I just determined to tag along. It could possibly supply me with some needed cheering up. 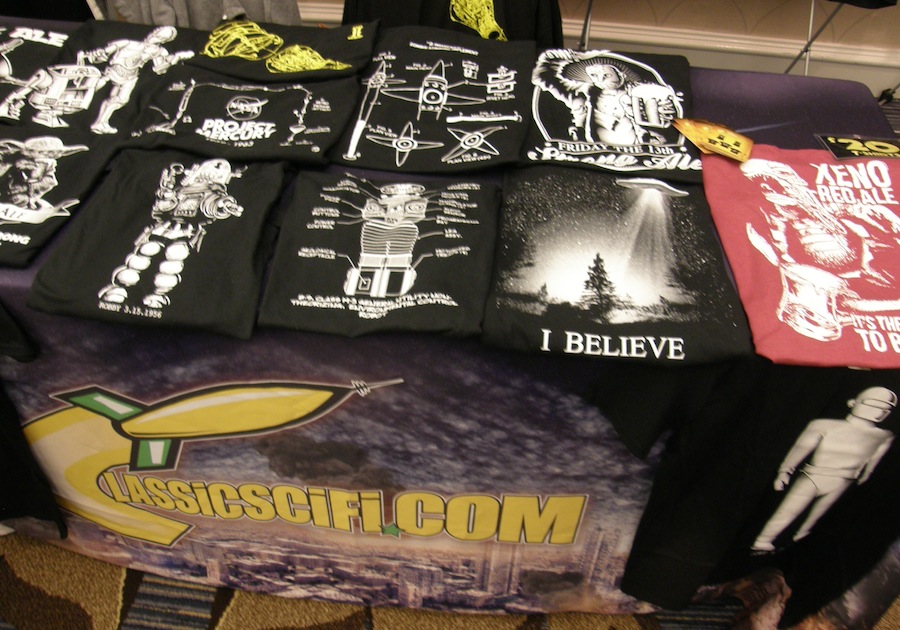 After some wrangling with a GPS that mysteriously advised us to make a completely useless circle around three blocks en route to the Holland Tunnel, we were well on our way, and on hitting Parsippany were amused by the castle-like design of the expo venue, the Parsippany Sheraton. At 11 in the morning there was line to get in. My buddy and I blended in among what you might call the more “normcore” of the fans and collectors on their way in, although we liked to believe ourselves moderately less pale and wan than many. As was unsurprising, some dude with a long beard and a futuristic-medieval costume holding a broadsword stood by the entrance. Every time I tried to get a shot of him talking to someone the latter person would back away. 13 years after my last Chiller, I noticed a distinct turndown in exhibitionist tendencies among attendees. A lot of these folks are, like all of us, getting older, and leading more sedate lives. Walking around the dealers’ tables later, one fellow was toting around a still of a nude woman in a transparent plastic bag, and one of the dealers noticed him and delivered some chastisement: “Turn that picture around, they got little kids here.  Little kids don’t wanna see that.” I’m not sure that’s true, judging from my particular level of curiosity when I was younger, but I wasn’t into arguing the point. But this was just one indication that Generation Chiller is spawning small nerds of its own. Who’da thunk it.

“Me too,” my bud said. “And I rent a storage space.” These observations didn’t prevent the table guy from making offering us a 2-for-1 deal, which we turned down while marveling as such oddities as a Leif Garrett skateboard patch and an action figure of eccentric alt-rock guitar god J. Mascis. 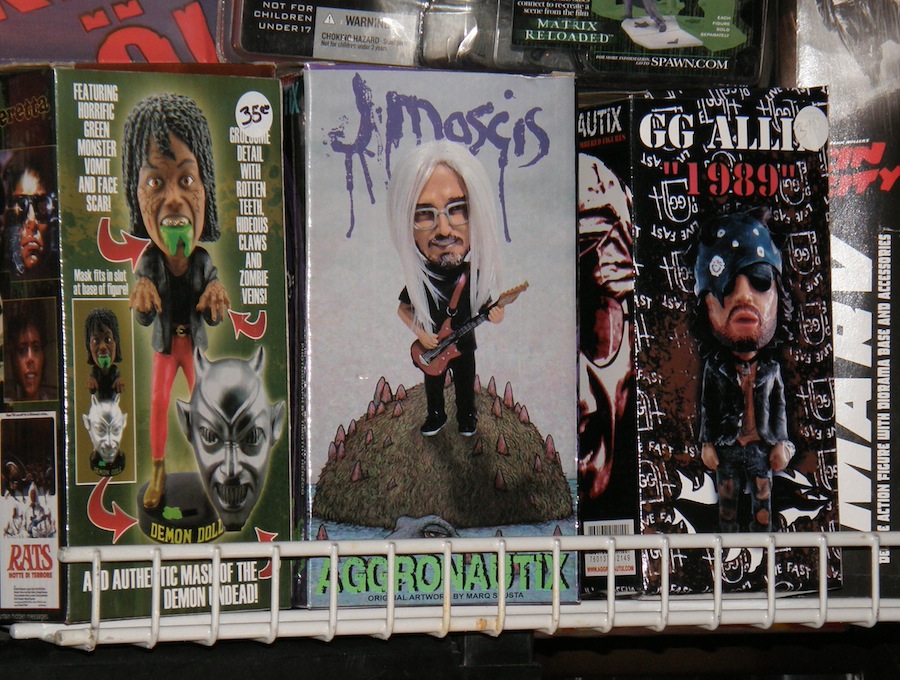 I’m still kind of a sucker for DVDs and Blu-rays, though, and back in the day Chiller used to really stretch my wallet. Given that European cult video outfits such as Carlotta and Arrow are making inroads into U.S. marketing, and you can get good deals on Amazon or E-bay for even the most previously obscure stuff, the pickings were relatively slim, and the most interesting stuff was at least quasi-bootleg. Finally scored a not-terrible looking copy of the infamous “Star Wars Holiday Special” and a few other goodies. Out of base curiosity I dropped ten bucks on something advertising itself as “the most offensive film ever made” because I never back down from a challenge. The older cons used to be replete with a lot of weird homemade genre product (a tendency explored, or exploited, in the 2006 fake doc “S&Man”), but there was relatively little of that this time around, but what was there had reliably risible titling (isn’t “Naked Bikini” an oxymoron?).

In keeping with the (I suppose) relatively recent push to family-friendliness, the number of “adult” celebs was pretty small and they were segregated in a non-descript area. The other guest star signing areas were a pretty fun mix of eclectic/eccentric. Comedic trouper Larry Storch, best known as Corporal Agarn on the TV series “F Troop” was schmoozing and signing like a champ at 92 years young; how could I not get a picture taken with him? I came across Dolly Read, the lead singer and guitarist of the Carrie Nations. Not a real band, as I’m sure you know, but the fulcrum of Russ Meyer’s cult classic “Beyond The Valley Of The Dolls,” written by this sites founder. Dolly gave me a lovely inscription on a “BVD” lobby card, shared some reminiscences of Roger, fondly recalled a recent “BVD” screening where she spent some time with Chaz Ebert, and sent her best regards to RogerEbert.com readers. I ran into Simon Kirke, classic rock drummer, and told him I wished that he were mentioned as often in the context of Free as he is in the context of Bad Company. Then I mildly hassled him on account of his daughter, “Girls” co-star Jemima Kirke, being part of the wave of new residents making Brooklyn unaffordable He laughed, and punched me in the mouth (OK, not that last bit, which some of you may remember from an old standup routine).

Observing and overhearing other attendees crow over bargains purchased and autographs obtained, my buddy observed, “The true nerds have a certain cadence to their voices, don’t they?”

“Yes,” I pondered. “They sound as if they’re being interviewed for a radio show or something.” It’s a token of how seriously they take their leisure. But who am I to talk, having bought ANOTHER Godzilla t-shirt (Japanese original, please) in my wanderings. Even after a more-than-ten-year-absence from the scene, I got into it with perhaps distressingly little effort.  Hell, I may go again at Halloween.