An Appreciation of "La Reine Margot" on its 20th Anniversary

Twenty years ago this month, audiences at the Cannes Film Festival sat down for the world premiere of "La Reine Margot," a lavishly mounted adaptation of Alexandre Dumas' noted historical novel inspired by France's darkest historical moments, directed by one of the country's most celebrated filmmakers, Patrice Chereau, and featuring a star-studded cast led by arguably their most acclaimed actress, Isabelle Adjani. However, when the film unspooled, those expecting the usual pretty-as-a-picture costume drama were shocked to discover that Chereau had actually presented them with a wild spectacle filled with graphic sex and violence on a level all but unheard of in a film of this sort. Only the premiere a few days later of "Pulp Fiction" kept it from being the biggest scandal of that year's festival.

Though it was admired enough to win both the prize for Best Actress for co-star Virna Lisi and the Special Jury prize (to which one commentator reportedly remarked that it must have been the Menendez jury) and went on to be a hit throughout Europe while winning five Cesar awards (the French equivalent of the Oscar), that was apparently not enough for Miramax Films, which grabbed the American distribution rights, as they did with virtually every foreign and independent film of note at the time. They insisted that Chereau chop nearly 20 minutes from its initial 161-minute length and restore a scene that he had already previously dropped so as to emphasize a romantic subplot that they decided to make the focus of its promotional campaign.

Alas, this 145-minute version, newly redubbed "Queen Margot," failed to catch on in the U.S. and Miramax basically abandoned it in order to pin all their end-of-year awards hopes on "Pulp Fiction." Since then, the film has been a bit of an obscurity in these parts but recently, Chereau supervised a 4K restoration of "La Reine Margot" to its original length (one of his last acts before passing away last October) that was screened at last year's Cannes festival as part of its "Cannes Classics" sidebar. That version is now getting its first commercial run in America (it opens at Chicago's Gene Siskel Film Center this Saturday), and while it will no doubt appear on DVD/Blu-Ray before too long, anyone who has a chance to experience it on the big screen should seize the chance.

The story opens in 1572. Tensions between Catholics and the Protestant Huguenots, the two factions fighting for control of France, are at an all-time high. In an attempt to bring peace to the region, a marriage is arranged between Marguerite de Valois (Adjani), the sister of the Catholic King Charles IX (Jean-Hugues Anglade), and Henri de Bourbon (Daniel Auteuil), the Protestant King of Navarre. Neither one is particularly enthused with the union but they go through with it, though the sexually voracious Margot spends her wedding night roaming the streets in disguise for a man to satisfy her needs, eventually finding him in La Mole (Vincent Perez), one of the many Protestants who have arrived in town to witness the wedding.

As it turns out, Catherine de Medici (Virna Lisi), Margot's mother and the real power behind the throne, essentially threw her daughter into the marriage as part of an elaborate plot to decimate the visiting Protestants, solidify her power and ensure the ascension of her favorite son, the hateful Duke of Anjou (Pascal Greggory) by launching a surprise attack on them following the wedding. Though thousands are slaughtered during what would become known as the St. Bartholomew's Day Massacre (an event later celebrated  by none other than the Pope himself), Henri survives both this and other elaborate attempts on his life—even befriending Charles in the process—but eventually is forced to flee home to Navarre. Determined to rescue Margot as well, Henri sends La Mole, who has since become her lover, to bring her back to safety, triggering a series of events leading to the film's unforgettable finale. 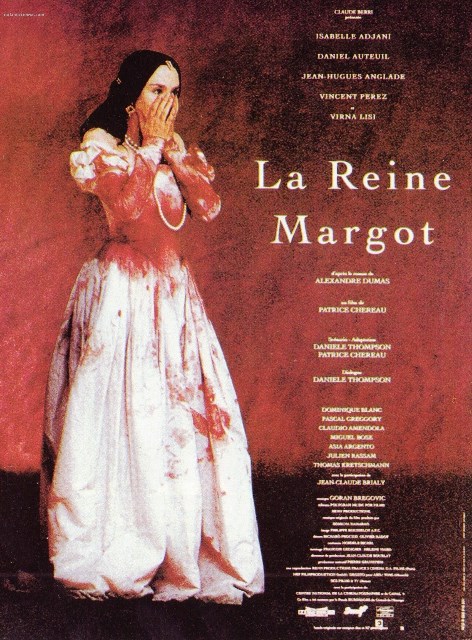 Having not seen the American cut of "Queen Margot" for a while, I cannot speak with any specificity about the differences between the two versions. What I can say is that it feels just right at 161 minutes. By taking a little more time to unfold, it allows viewers who may not be familiar with the historical backstory to get acclimated with what is going on. At the same time, Chereau keeps things moving along at a smart pace that rarely flags. This is a film in which everything, ranging from the emotions of the characters to the stunning costumes and production design, has been consciously over-scaled for maximum effect, and so it only makes sense that the running time follows that pattern.

So why should you revisit a 20-year-old movie based on a historical event that will be a question mark to most contemporary audiences that American viewers pretty much rejected the first time around? For starters, "La Reine Margot" is the kind of screen epic that was on its last legs twenty years ago and is almost totally non-existent these days. It tells a complex story, dealing with historical and religious issues without dumbing things down or making everything black-and-white, and fills it with characters who are more three-dimensional and realistic than the norm. On the production side, the film is never less than stunning to behold—"La Reine Margot" was one of the most expensive French films ever produced in its time and every single franc appears to have made it to the screen. Just in terms of pure visual spectacle, this is as lavish and ravishing as anything that has been put on the screen in recent years and there is hardly a moment here that could not be freeze-framed and studied intently as though it were a work of art.

As for the more lurid aspects of the film that caused so much controversy when it premiered, they actually allow it to feel fresher and more current than one might expect. At the time, the gruesome violence (including graphic stabbings and throat slashings as well as some more creative methods of enemy disposal) and eyebrow-raising sexuality (including intimations that Margot's list of past lovers included her three brothers) were deemed shocking but nowadays, they, especially in conjunction with all the power struggles and nefarious double-dealings, come across as what one might find in a typical episode of "Game of Thrones." The upfront depiction of the carnage is also important because when it comes to dealing with the St. Bartholomew's Day Massacre—pretty much a real-life "Red Wedding"—subtlety is not really the best approach. Luckily, Chereau stages the carnage in a spectacular manner that nevertheless manages to fully convey the horror of what really happened. 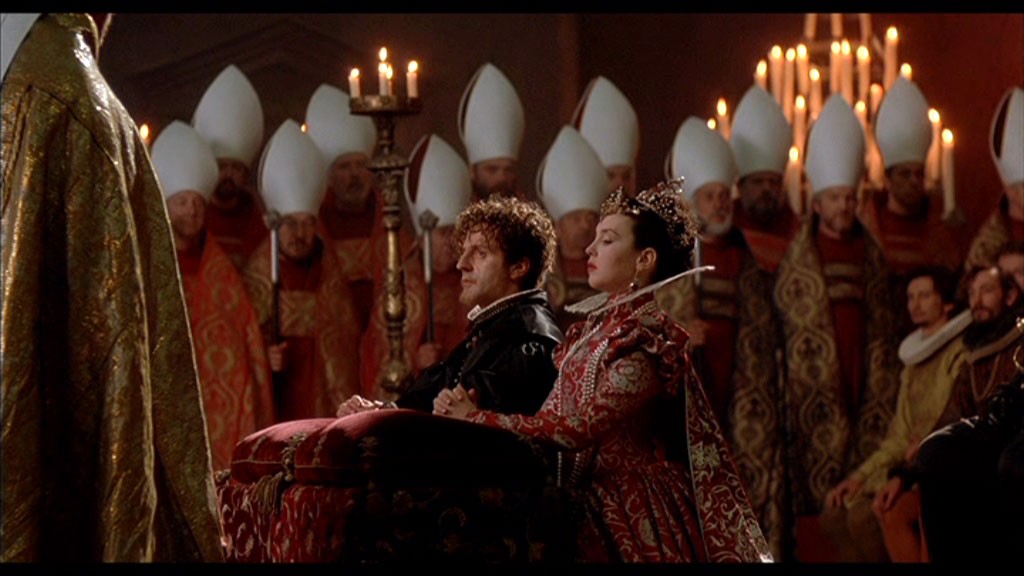 The most interesting aspect of "La Reine Margot," both then and now, is that it is the rare screen epic in which the female characters are pretty much front and center throughout. As Margot, Isabelle Adjani was the perfect choice in that she possessed both the talent, maturity and fearlessness to pull off the difficult emotional beats of the part and the preternatural beauty that allowed her to convincingly portray her despite being almost twice the age in real life as the actual Margot at the time of the events. At the same time, Virna Lisi, the one-time European sex siren from such gumdrops as "How to Murder Your Wife" and "If This Is Tuesday, It Must Be Belgium," turned in the performance of her career as the monstrous Catherine de Medici by painting her as not so much pure evil as coldly pragmatic (which can be even more frightening), and when she discovers what her machinations have ultimately wrought in the end, it is hard not to feel a little sympathy. Finally, in one of her first major non-horror roles, Asia Argento steals all of her scenes as Charlotte of Sauve, a member of the court who is so intoxicated by the rush she feels in being used to plot against Henri that she doesn't realize how throughly she is being used until it is too late. Argento displays the offbeat and almost feral eroticism that would prove to be an unexpectedly good fit in such later period dramas as "Marie Antoinette" and "The Last Mistress."

Yes, there are some flaws to be had in "La Reine Margot" for those who want to pick at them. Some of the early scenes setting up the various plots and counter-plots can be confusing to those unfamiliar with the film and history; the relationship between Margot and La Mole is not quite as developed as it could be, a move that threatens to diminish the gonzo power of the final scene; some of the story details may not exactly pass the smell test for historical accuracy. However, anyone who goes to a film like "La Reine Margot" expecting a dry recitation of the facts and nothing more is perhaps missing the point. This is a go-for-broke, blood-and-thunder saga that is as powerful and provocative today as it was when it was first released—even more so now that it has been returned to its full length—and even though hardly a week seems to go by now without some "epic" arriving in multiplexes, this one is daring and dazzling enough to make nearly all of them seem puny by comparison.