She is a little girl with with flopping sneakers, a big grin, and a sharp tongue, the title character of Haifaa al-Mansour's first feature, "Wadjda" (2013). This movie is a critic's joy to study. It might simply be a clever story about a girl trying to buy a bike. It might be another pompous imperialist piece, showcasing the usual Western fetishization of Muslim life. Or it is a layered self-critique of Arab ways and means.

Wadjda (Waad Mohammed) is a tween in a Saudi Arabian girls' school. With her classmates, she dresses in long drab gowns and ponytails. She wanders through classes with lethargy; the hot sun and the tedium of parochial learning do not help. A hawk-eyed principal (the single-monikered Ahd) watches over, ready to reprimand for any infractions, especially in self-expression. Imagine Nurse Ratched in high heels. Wadjda herself, however, is a walking package of pre-teen sarcasm and snide comments. Most Disney Princesses clash with authority through song and secret skills; Wadjda is no Disney Princess. Her song is noisy rock music blaring from her cassette player. Her secret skill is her wit and intelligence.

One day, her young neighbor Abdullah grabs her scarf and speeds off with it on his cycle. That starts her on her mission: to purchase a bike of her own and race him. She earns money by making bracelets and running errands, calculating every step toward her big purchase. Her most ambitious effort is entry in the school's Qur'an competition, requiring her to memorize a fifth of the sacred text.

In the West, we peep into Muslim and Arab life, seeking to look behind the veil. The polemics against the Saudis, in particular, repeat five things: Islam, oil, sand, long robes, and laws against women drivers. In sum: astronomically wealthy misogynists, living in some prehistoric desert. Our films show them as hard-wired for violence, whether in need of the ultimate White Savior, "Lawrence of Arabia" (1967) or a Federal investigation in "The Kingdom" (2007). Otherwise, as is the case with "Fahrenheit 9/11," we see them as a band of zillionaires plotting to control the world, at the cost of American lives. When Wadjda is told women do not ride bikes, we do not assume it's something particular to the fictional characters in their fictional environment. Rather, we assume that this is Arab life, if not Islam itself, in action.

This film is one of the first major contributions to cinema by a Saudi, following the recent "IMAX: Arabia" by Hamzah Jamjoom (2010), which shows sympathetic and breathtaking sides of the nation we have never seen. Al-Mansour's film, in contrast, enjoys all the usual stereotypes. Wadjda walks home and construction workers want to molest her. Still married to her mother, Wadjda's father gets engaged to a second woman. The school principal forces the young women to stay out of male mind, out of male sight. Women work and cook while the men work and play video games. The students are called out for menstruating. They read Qur'anic passages that speak of authority and Hell. Nail polish is an act of rebellion. Romances take place in secrecy and darkness. That they are stereotypes does not negate their reality. But, are they objective depictions or a sort of Arab-sploitation? The answer is in the mind of the filmmaker and in the eye of the beholder.

The English edition of the film gives Wadjda's name the Orientalist spelling, inserting a "dj" where a "j" is sufficient (think: Wajda), which takes a simple name and complicates it. And, on top of all that, the filmmaker herself is a woman in this alleged land of coercive patriarchy. Many on the Right love this material as sort of proof of Islam's backwardness, while they clean their guns. Many in the Left eat up this material faster than they smoke their legalized marijuana. Some will call al-Mansour's voice a long awaited insider's depiction of Saudi life. Others will call her a stooge for European financiers, selling out her people, as part of a greater campaign of empire. Regardless of the critics and supporters, she is free to make the film she chooses.

In celebrating this film, however, we might feel as though we are doing our part in liberating the women of Saudi Arabia and, by extension, Islam into a mythical Western world where no woman is exploited or abused. The only thing I can imagine that is even less useful, is to go to Facebook and click "Like" on the report of a major calamity. I first watched this film in an auditorium full of elderly women in Highland Park, Illinois, and much of the conversation after the film addressed the "poor women of Arabia." I hear the same conversation after screenings of Iranian films. Ugh.

But if we look deeper, we might see something else intelligent: the film raises many questions about those stereotypes. Girls are not allowed to ride bikes, yet the store owner sells girls' bikes. And, the market is stiff enough that Wadjda worries her prized green bike will sell. So, if there is a prohibition on girls riding bikes, it exists in the imaginations of some people. 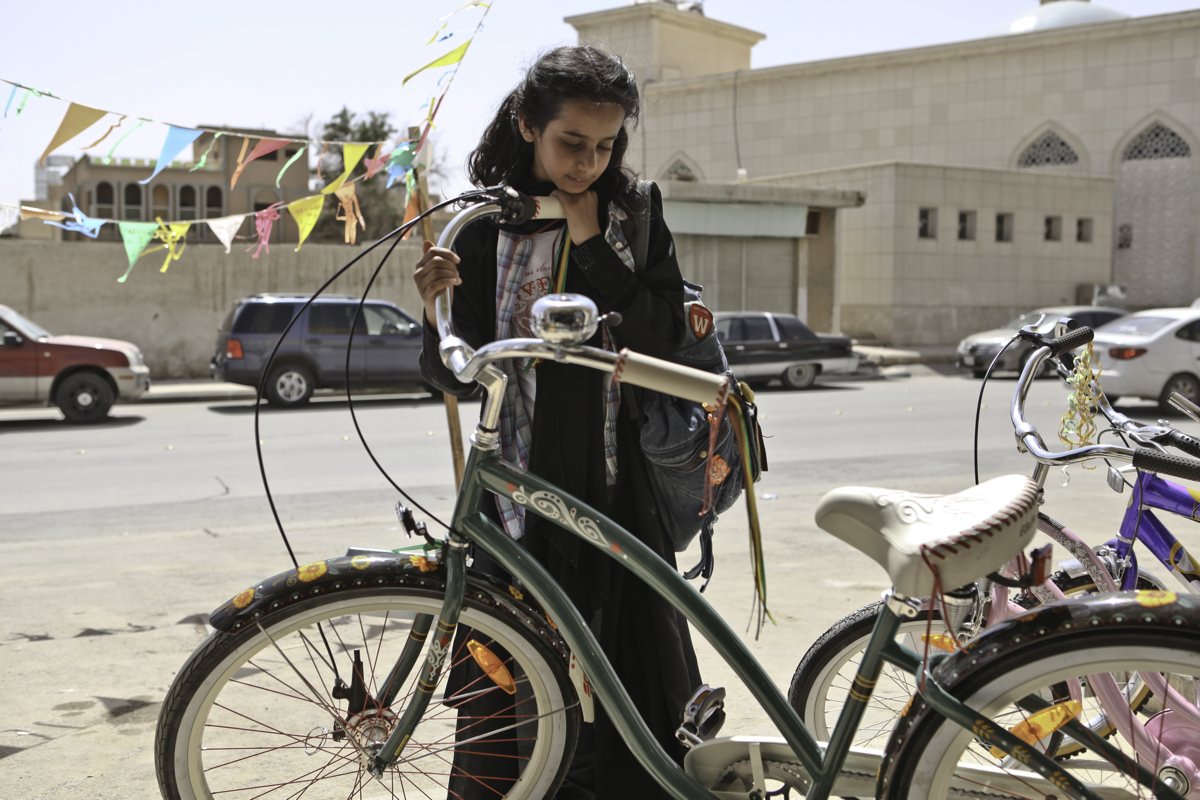 Al-Mansour's film zeroes in on many inconsistencies. Wadjda's father is not pursuing a second wife; his mother demands a grandson, and chooses his next wife herself. Of course, he fails to stand up to his mother, perhaps because of the strictures of local culture, or perhaps out of some sort of hope. More than that, he leaves his wife and daughter mostly alone and longing, regardless of his second marriage. Save for a smile, he remains absent, physically and emotionally.

Here we are in the Arabian peninsula, and the girls can barely read or understand basic Qur'anic Arabic. Writing as somewhat of a practicing Muslim, that moment was for me the sharpest critique in the film. Islam is present in the form of a video game designed to teach the Qur'an, an on-stage competition and the neighborhood mosque. The Qur'an is read here for competition, rather than embodiment. The rest is a bizarro mix of selective cultural and religious-sounding impositions.

And, as far as those drivers are concerned, al-Mansour touches on a notorious problem of Saudi ethnocentrism. These are mostly Bengali drivers who come to the Kingdom, hoping for religion and riches in the land of Islamic origins, getting relegated to unstable jobs as drivers and window washers. They get mistreated, here in the film, even by children. A parallel story would speak of Southeast Asian women who get jobs as housekeepers, and get frequently abused.

And, if the young women in school have to dress in such loose, shapeless puritan clothing, we wonder why the teachers and administrators are permitted to load up on makeup and tight skirts. I have a student who grew up in a local Chicago parochial school, and felt the same hypocrisy from his teachers; this problem seems universal, if not in dress then in conduct.

The film critiques not only the Saudis, but us as well. We imagine Saudi Arabia as a barren wasteland of beige, yet the malls are thoroughly modern. We assume that the women remain locked in their homes, but all the women in this film have jobs. We watch the women covered in black, and we will infer nothing but oppression—enough that the bigots in supposedly enlightened Europe ban the attire—but these women seem to have full agency. Seem to.

At one level, this film, thrills itself with all the those images that Westerners relish in our self-congratulation. It is, however, a biting satire on absurdities in the way we or they employ religion, culture, and power. That is the approach of great stand-up comedy, and much of this film could have been the material for a set of jokes. I have beloved relatives who cover themselves in full abaya (loose robe) and niqab (face veil). When they go on vacation, I wonder why they include themselves in their photos with waterfalls and such. Here, we have a similar moment with a family photo on a coffee mug.

But in all the commentary, it is interesting that all the voices of compulsion are women. The principal and the unseen grandmother wield unchecked power; one asserts her authority through her office, imposing restrictions through a religious hue, while the other asserts her authority through cultural demands. Perhaps they aspire to nurture and rear their students and children; instead, they disempower them. This is a powerful statement on the nature of oppression: at some point, subjugation breeds subjugation. Perhaps al-Mansour places the source of the oppression on God, Islam, the Qur'an, Saudi culture or men. But in this film, women enact the coercion, and suffer from it. If the problem is patriarchy, it gets internalized, embodied and perpetuated.

But, commentary aside, the real strength of this film is in its quiet, gentle heart. Al-Mansour pulls amazing performances not only from Waad Mohammed—who is outstanding, capturing almost every scene—but from everyone else as well. Reem Abdullah is special as Wadjda's heartbroken mother, constantly trying to straighten her hair to win back her husband. Her natural form is a curve that she forces to straighten. Thus, she is broken. Further, there are scenes when she dresses in niqab and abaya, and somehow we know exactly how she feels, just by her gestures and pauses. Sometimes, they are expectedly hidden behind the cloth.

This film is a masterful debut. It is indeed a great story. In a second viewing, I watched it with a number of students, male and female; almost all were Arab Muslims. Half the group was completely offended, while the other half could not stop laughing. And that sums it all up. This film's absurdity or greatness rests in the eye of the beholder. When I screen a film, I look to see what it gives me within the frames and beyond, and this film gave me plenty.