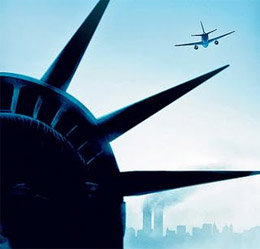 Based on the current trends in Hollywood films, we tend to think of the movie industry as some sort of giant Business Corporation, with board rooms all over town constantly analyzing projection charts and planning the next sequel to another obscure comic-book hero flick (in 3-D). Then five years ago "United 93" came along and defied most of the usual reasons for a film to be produced in the first place. It surely wasn't made with the idea of losing money but you could anticipate this wasn't going to be your typical drama/action-adventure movie (or a blockbuster for that matter). It was never even going to help sell great amounts of movie candy (though I can recall attending a screening of "The Passion of the Christ" years ago, and seeing people entering the theater with the usual giant containers of popcorn and soda, so I guess some moviegoers can eat through anything). We knew beforehand that "United 93" would be tackling a difficult subject worthy of scrutinizing, after watching it we come to understand this was one of those few "necessary" films.

I can't think of any other movie experience as vivid as "United 93" . No director matches Paul Greengrass' ability for making his fictional films seem like the real thing. You can say all you want about his occasionally annoying "shaky camera" but it can be an invaluable tool for immersing the audience into the subject at hand, and it has resulted in such outstanding movies as "Bloody Sunday", "Green Zone" and the last two "Bourne" films (though personally I believe that the latter ones would have been benefited from a more classic cinematography as they belong to a more standard genre). The only real risk with Greengrass' style is that some people might leave the theater thinking they've just witnessed a documentary when in reality, his works are simply fictional works, sometimes based on real life events.

The script for "United 93" was clearly assembled like a puzzle from the several known conversations with the plane's occupants; the rest was obviously made-up from scratch. The film tries to be as accurate to the real life events as possible. On the plane, the actors sit the actual places that the real event participants occupied. The roles of the flight controllers are played by the real men involved in that dreadful day and who better to know what was said and what their reactions where.

We first find ourselves with the seemingly unremarkable group of characters at the departure gate (as we have countless times during our own lives). They are doing the usual things like talking business in their cell phones, hitting their laptops keys and joyfully interacting with their loved ones however, unnoticed by the rest, a few of them are sitting silently, looking nervously at one another. The innocent travelers talk about the trivial matters most anybody would have likely discussed on such a day. They all board and lay their items on the overhead bins. The plane takes-off and breakfast is served. We feel like we boarded the craft ourselves and have become just another passenger about to witness what we know too well is coming.

At first, the air controllers at the Virginia National Air Traffic Control react incredulously to the developing news of the first missing plane ("...a hijacking? Haven't seen one of those in years"). After hearing these rumors they even go back to their casual conversations and their smiles continue until more alarming signs turn up. The controllers at Newark Airport are staring at their screens trying to put two and two together, only to have their unexpected answer appear right in front of their eyes, as they just happen to have a direct view to the World Trade Center on this, the clearest of days.

According to the film, a plot of this nature has never even crossed the minds of those responsible for preventing it in the first place. Greengrass does a great job of organizing this immense amount of material in a way that makes the chaos from that day seem genuine, as well as similar to how it was for the rest of us in our own surroundings and circumstances. The film may not have been shot in real time but it sure feels that way. Future generations will be able to watch and make some sense on what the day was like.

"United 93" is completely void of any of the usual movie clichés. There are some similarities with the old "Airport" movies but it is as close to those as it is to "Gone With the Wind". This is not by any means an "Ark movie" with its "mixed bag of characters" in which no harm can ever come to the heroes. The hijackers are not your typical imposing villains and instead seem like nervous high-scholars sharing a common secret. We are all too aware what the film's outcome will be and yet, subconsciously, we can't stop hoping for a break: if only the guy arriving late would miss the flight; if only the plane's departure would be held by the tower a little longer (until news of the WTC crashes can spread); if only the pilots would pay more attention to the "possible intrusion" message and refrain from opening the cockpit doors. The inevitability of the events is demoralizing.

While watching "United 93" one gets the impression that Greengrass try to make everything appear as ordinary as possible. The IMDB lists Morocco , Stansted Airport (UK) and Pinewood Studios among the filming locations but one could swear everything was done in the actual places (including mid-air). There's hardly any music to accentuate the mood (nor is it needed). The visual effects are effective but subtle. When looking at the scenery from the cockpit, things look so ordinary that we have to remind ourselves we are not really watching the actual landscape (the main reason why audiences usually spot visual tricks is that they often call attention to themselves, the furthest thing from happening here). There is none of the usual, flashy CGI that other spectacles would have surely used, such as external shots of the plane in distress. Greengrass realizes that the audience's point of view must reside inside the cabin (along with the rest of the passengers) and once the chaos starts he doesn't allow us to take a break until the plane has hit the ground. All this time our subconscious has been made aware that this is a different kind of movie experience and that makes everything all the more frightening.

Every role in "United 93" was cast with complete unknowns. Five years have passed since my first viewing I realize I still can't tell the name of a single actor in what was such a memorable movie. Their anonymity was an absolute condition if total realism was to be achieved. Had there been, say, a Nicholas Cage (as in Oliver Stone's "World Trade Center") this would have allowed the audience to take a step back and remember they were only watching a movie, resulting in a standard and altogether different experience.

Without resorting to the slightest bit of sentimentality Greengrass turns "United 93" into a painful, stomach turning experience that leaves the viewer completely drained. We spend so little time with each of the characters that we hardly become attached to any one of them and yet the film couldn't be more devastating. It may also be a little too real for its own good as we'd rather not have to see it for a second time. Still, we come away realizing we've just gone through an important experience as we are finally able to have at least an idea of the human suffering behind this event. We also can't help but wonder how we would have reacted ourselves under such circumstances. My guess is that most of us would have simply frozen from the fear of such a terrible death so it's remarkable that the United 93 passengers were able to pull themselves together in the first place. The word "heroic" is thrown around too casually these days when in truth two conditions have to be met: a remarkable, self-less effort and a noble cause. These people's actions would be remembered incorrectly if based on the premise that they gave their lives to save a particular building or landmark from destruction (actually, I suspect this was the last thing on their minds). It was the potential pain to their loved ones (on the other side of the line) that likely compelled them to act.