Through a swan, darkly 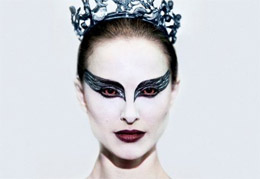 Mirrors and reflections have always been an obsession for filmmakers from all over the world - something that came as a result of the wealth of symbolism that they inspire, of course, but also of the psychological development all of us go through in order to recognize ourselves as individuals. (That led, for instance, to Jean-Louis Baudry's brilliant analogy of the film spectator as someone regressing to the "Mirror Stage" described by Lacan). From Buñuel to Hitchcock and from Fritz Lang to Tarkovsky, directors from different eras and different styles have used doubles as a thematic basis of one or more of their works -- but perhaps it has seldom been used so intensely and organically as in Darren Aronofsky's "Black Swan."

Frequently led to observe her own movements in several mirrors in order to refine her technique, Nina Sayers (Natalie Portman) appears in the film's first minute seated before multiple reflections in the living room of her small apartment -- and it doesn't take long until, in the subway, she's once again seen in front of her reflection while noticing a girl that, in the adjacent car, looks like a copy of herself (but wrapped in black clothes that contrast with the whiteness of her own costumes). With this, Aronofsky establishes the visual logic that will govern the narrative: the contrast between white and black, and of course, the broken nature of the protagonist. 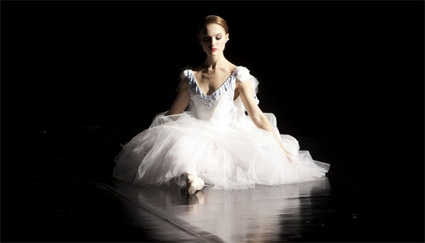 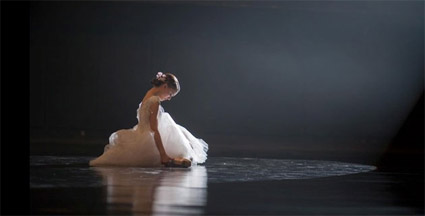 For Nina is a dancer whose fragile and childlike personality presents a dangerous combination with her obsession for perfection - especially when it's required for her to explore an unknown aspect of her nature: her sexuality. Repressed by the belief that absolute discipline will bring the technical precision that will turn her into a great dancer, the girl leaves out any pleasure that ballet can offer, mechanically repeating the steps designed by her director (Vincent Cassel) without ever feeling free enough to enrich them with the spontaneity that he wishes to witness in her as performance. This self-imposed limitation that the director claims to have observed over the years becomes even more damaging when Nina is forced to live a character who only comes to light if presented viscerally: Odile, the black swan. 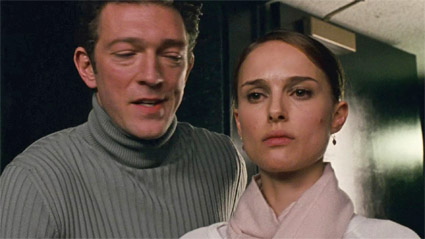 That's when Lily (Mila Kunis) arrives on the scene, sometimes being seen by Nina as a rival and sometimes as a partner: spontaneous and joyful, Lily immediately presents herself as a reflection of the protagonist, having a similar physical type, but behaving in a manner that is the opposite of Portman's character - something that is reflected not only in the colors of their clothes, but also in the fact that Mila Kunis is a tanned answer to the very white Natalie Portman. Thus, the conflict between Odette, the doomed princess of Swan Lake, and malicious Odile is also presented in the dynamics of the two dancers, finding support on the black wings tattooed on Lily's back and the ease with which she seduces everyone around her. Thereafter, Nina begins to use Lily as a representation of her own possible failure, creating an alter ego who, having the face of Lily, appears as a sort of Tyler Durden in slippers and black leotard. 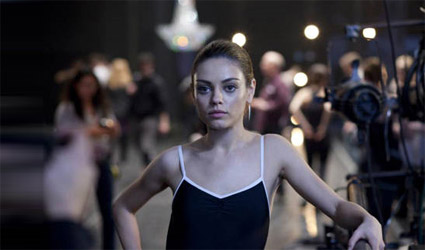 Gradually, this new side of Nina seems to detach from her more withdrawn half - something that Aronofsky originally illustrates with admirable subtlety when showing the ballerina's reflexes moving with a very slight delay until they're completely free from the original dancer, although they still remain stuck on the other side of the mirror (i.e.: in her mind) for a long time. However, as the protagonist struggles to find Odile, her alter-ego "Lily Durden" (to distinguish it from the real Lily) gains strength and begins to manifest itself physically, as if Nina is fighting to free her long-repressed sexuality. It is fascinating to notice, for example, how a black pillowcase seems to form the outline of a wing out of her back in a beautiful sign of the transformation she will experience.

And, indeed, the metamorphosis is absolute: if Nina initially danced in a cold, repressed way as Odile, in the end her fantastic dance brings her completely surrendered to the character - and Portman (and her dance double) offers an unforgettable performance by illustrating the difference to the viewer, and even her heavy, fatigued, breathing emerges as an almost sexual moaning. 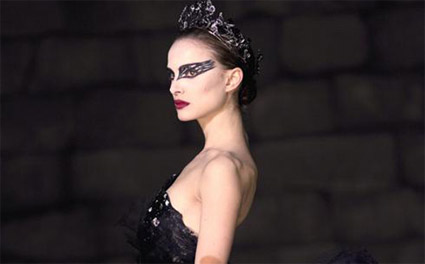 But achieving this feat costs her a heavy price: at this point, Nina and Lily "Durden" are fighting for the body and the consciousness of the protagonist. Pay attention to the memorable shot in which Aronofsky seems to briefly merge the two girls in a game of reflections in Nina's apartment until Lily moves and gets separated from the other.

Thus the only way for Odile to appear on stage would be through the complete elimination of the repressed Nina. And to achieve this, the protagonist kills the person that was on her way to the desired perfection: herself.

The weapon she uses? A sharp piece of glass. Extracted from a mirror. Freud would have experienced an orgasm with this outcome. Rightly so.