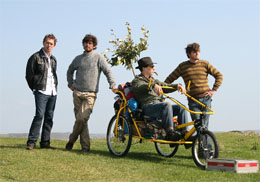 I clearly remember the first day of our only family vacation while my father was alive. My father was wearing a dapper boater "Can Can" straw hat, but the window was left too far down and it soon swooshed off my father's head and was gaily rolling down the highway. On that particular day, he knew he was dying and that is the reason for our journey. I thought of my father while watching "Third Star," a touching independent movie about four male friends taking a journey to a remote Welsh beach. The film's narrator, James (Benedict Cumberbatch), has an unnamed terminal cancer. My father didn't die of cancer, but he was bit of a dandy and always wore a hat, usually one more like the fedora Cumberbatch's James sports at times in this movie. 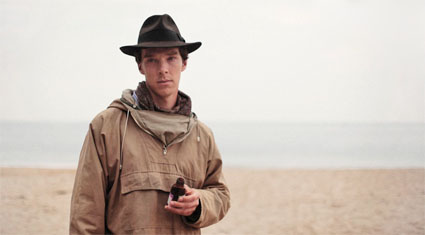 We've seen Cumberbatch as a proper WW I English officer startled by the reality of modern warfare in the 2011 "War Horse" or a crackling quick smart aleck sociopath in the BBC TV series "Sherlock." In "Third Star" he is neither of these. Slightly bitter, his James believes he can see the folly of his best friends and family.

When we first see him, he's 29 and going to be thirty, but also soon to be dead. He's a man in a hoodie looking at grey skies and a dark ocean. His sister Chloe is upset and his parents are being brave, yet we sense that he is impatient under their care. "The sickness may be mine, but the tragedy is theirs" he thinks to himself. 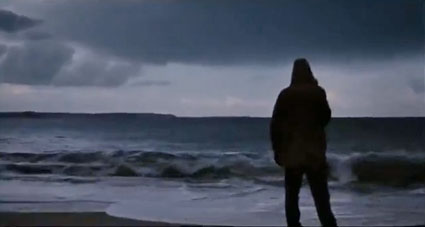 Because their hovering reminds him of his death, James feels, "I need to escape so my friends are taking me to my favorite place on earth." That place is Barafundle Bay, a remote place requiring a hike and camping trip that James is not fit to make alone. 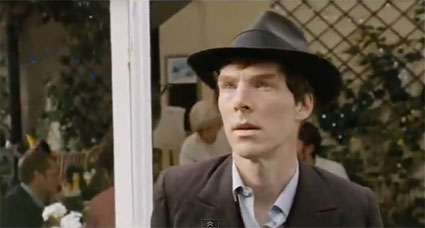 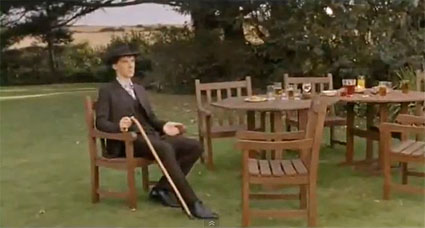 At the edge of thirty, James is like many young people. He's lost some of that "we-can-change-the-world" optimism and unlike his friends, he has run out of time. He's frustrated by his three friends and how they aren't pushed by the kiss of death. For the kindly, directionless Davy, James' illness comes at a time when Davy is unemployed and Davy (Tom Burke) has devoted himself to caring for James. On this camping trip, he makes sure James has his meds, including morphine for the pain. 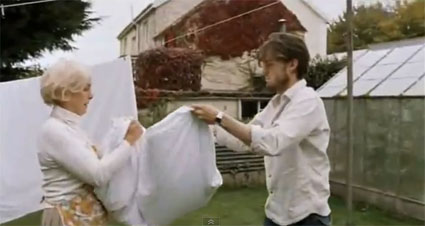 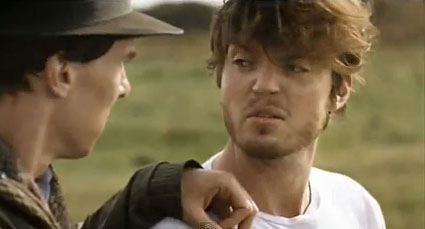 Bill (Adam Robertson) is the most fun-loving of the foursome, but he has a girlfriend whom no one seems to like. We don't see enough of her to really agree or disagree with James' assessment of her. The men are in agreement that Bill would be better off without her yet none of them are in long-term committed relationships. Or at least it seems that way at first. 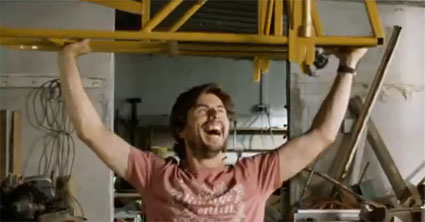 Davy and Bill were the main supporters of this journey with the most successful of the three, Miles (J.J. Feild), a late last-minute inclusion. Miles and James were once close, in a competitive way--both being writers. Miles has grown increasingly distant, in part because he can't handle James' terminal illness. James tells us "Miles has the pressure of expectation...I have the pressure of time." As part of a concession to James' weakened state, Davy, Bill and Miles help propel a special cart for James, something that looks like a three-wheeled recumbent bicycle without pedals. 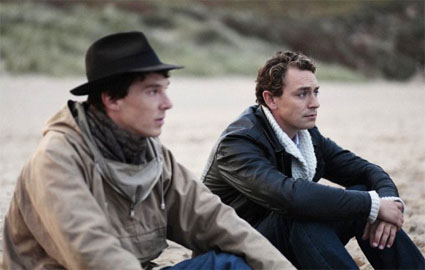 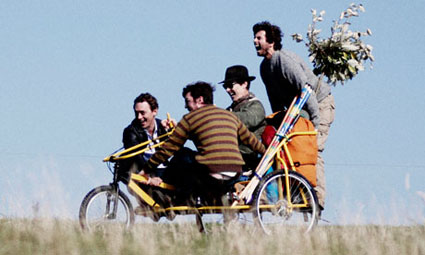 The movie takes its name from the men's conversation about J.M. Barrie's "Peter Pan." The foursome can't decide if Peter Pan says it's the third star or the second star. The direction to Neverland, "second star to the right, and straight on till morning" actually comes from the Disney animated feature of "Peter Pan" (1953). Barrie based Peter Pan on his his older brother who died the day before he would have turned 14. His brother would forever be a young boy in his mother's mind and never grow up. James will also never grow old and he envies his friends who will. 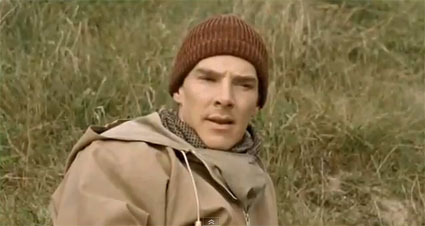 First-time feature director Hattie Dalton allows us to enjoy the beauty of Pembrokeshire coast, given a grainy nostalgic look by cinematographer Carlos Catalán. We're instantly reminded of old home movies and memories of the past. Dalton doesn't allow the men's interplay to fall into mawkish sentimentality and writer Vaughan Sivell clearly means this to be much more than a tearjerker as Miles quips early on, "This trip is like going for a walk with a sick, white Oprah." Of course it is almost the opposite. Between the snarking and revelations, there are unexpected disasters--involving the cart and even James' medical supplies. Their adventures are funny and sometimes quirky. There's a bartering session with a ferryman, and a conversation with a beachcomber obsessed with finding a rumored lost shipment of Darth Vader action figures. It all seems real enough. 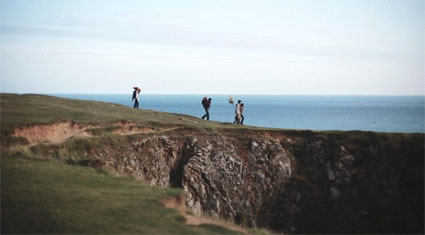 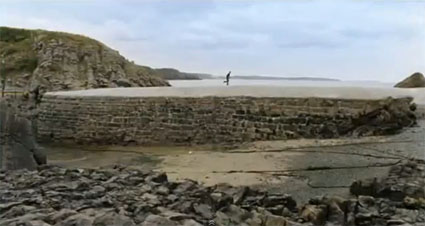 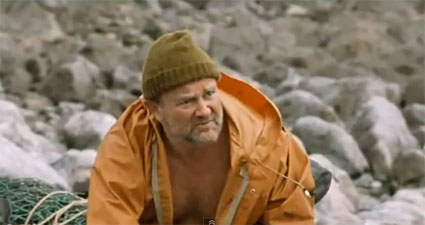 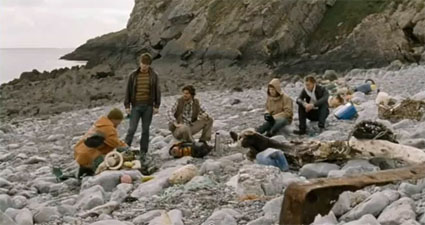 As we strip away the veneer of civilization and friends' polite indulgence toward the dying James, there's a sense of brutal honesty and an underlying theme of nature taking its course.

If the movie doesn't encourage you out of your daily muddle and get you going on your youthful dreams or bucket list, then at least it will introduce you to Barafundle Bay which in 2004 was on the list of the 12 top beaches in the world and listed in 2012 as Britain's top picnic spot. It used to be a private beach owned by the Cawdor family of Stackpole Court, but is now managed by the UK National Trust. There is no road access to the beach.

My father's last vacation was a trip to Northern California from San Diego. I didn't realize then that he had been born and raised in the Stockton area. The only place we stayed for long was June Lake where my father and brother fished. June Lake is in Mono County on the south side of the Mono Basin, near the Sierra Nevada range. The air was crisp and the water clean. My father loved hunting--making his own decoys. His brothers who weren't always on the best of terms, all bonded through fishing, a pastime that only my brother currently follows. Yet we all love the sea and wildlife.

In time, like James, my father's body betrayed him. My father would not be able to take a last trip with his friends or his brothers. He took his last trip with his family. My clearest memory of June Lake is only a sad incident where I recall my father falling due to the weakening of his legs. We also saw Sacramento, our northern most point before we turned back toward home, and we stopped for a freshly baked pastries at Solvang at some point--either coming or going. I remember both cities in the cold air and gentle light of the early morning.

Between that trip and his death, like James, my father was by turns sad, angry and sometimes wise. Dying too soon can bring out a helpless rage and yet put things in perspective, just as it did for the ad executive Linds Redding who died earlier this year and left behind an essay "A Short Lesson in Perspective."

My father worked hard and perhaps people might not have considered him a success. James sees himself clearly as a failure, particularly in comparison with Miles. Yet while my father didn't attend college all three of his children did and earned degrees. He could not have known that the day he died. James might not be able to see how his life and its choices resonate in the future. Neither Sivell nor Dalton comfort us here with any flash forward scenes. 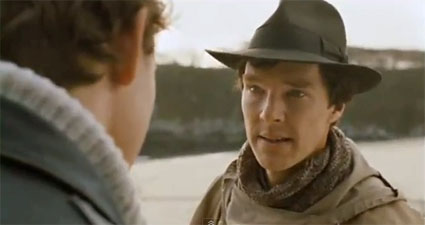 My father and James both came to separate decisions on how they would face their closing days as they moved toward a certain death. I recognized some of James' bitter anger toward life's betrayal; I saw it in my father, but I've mostly forgotten those dark days in favor of the happier memories. In time, I suppose one can assume the same happens for James' friend. For men, the thought and reality of dependency can be emasculating and we aren't all guaranteed a graceful dignified death. Do we leave the choice to God or our friends and family? Was the journey to Barafundle Bay folly or a grand last hurrah? 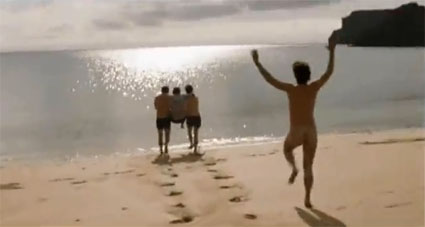 None of these questions are answered in "Third Star," but this movie does give you something to talk about if you're ready to consider your mortality and perhaps you'll take the time to live life better. The movie "Third Star" made its debut at the 2010 Edinburgh Film Festival as the closing offering and was released a year later. It only became available as VoD this year.