These men could have been friends 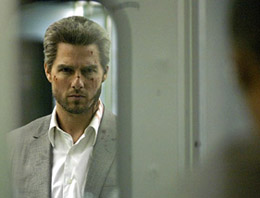 A few film directors end up becoming masters of specific subjects. Scorsese grew up in an environment that allowed him to understand organized crime from the inside. Tarantino has a grasp on the language that some street people, their drugs of choice and their methods of use, and so on. Michael Mann is the Hollywood Epic Techno-Crime expert. Did he grow up with it? Did he research it? A few years ago, I came across an old 70s Starsky & Hutch episode which happened to be written by him; in it, a serial killer claimed to receive his murdering orders from outer space and wore a tin-foil pointy-shaped hat for just that purpose. This means I'm basically leaning towards research, but your guess is as good as mine.

Even though Mann has made good films in other genres ("The Last of the Mohicans" and specially "The Insider"), it is in his crime stories that we witness such a level of detail that we never question their realism. The impact of his characters on us is stronger; they spring from a part of real life that most of us have never been in contact with. Mann knows the precise block of the prison where they met, what their aliases are, what crimes their rap sheets include, and what dark and isolated places under which bridges they plan their schemes.

This same level of detail applies to the law enforcers who are assigned to chase them: how this affects their family life, what clues they follow to picture the prey they're going after, their hangouts, and so on. All of these protagonists are equally easy to identify with and they never seem to take a break for sleeping. Who can blame them? Few directors have ever managed to depict the nights of cities that never sleep as beautifully as Mann.

Michael Mann's biggest contribution to cinema might be the fact that no other movie director, before or after, has directed a better and more adrenaline filled bank-robbery scene. No one has ever managed to put us in the middle of one like he has. When the second best-ever movie bank robbery scene (in "Dark Knight") is an homage to his in "Heat" (1995), he knows he must be doing something right.

This doesn't mean Mann's work is absolutely realistic nor should it be. Even in his great masterpiece "Heat" the bank robbers inexplicably manage to bring along duffel bags of the exact same shape and size needed to pack the equally shaped and sized bags of money, and the film itself ends with two middle-age guys running a marathon through an airport's landing strips without so much as losing their breath. His multiple virtues earn him a pass for these small glitches; after all, he's a movie director, not making documentaries. 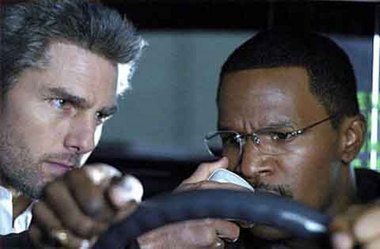 All of Mann's abilities are put to great use in to the first two acts of "Collateral." Much like in "Heat", his main and secondary characters are experts at their professions. Jamie Foxx's Max feels more realistic than most cabbies we've seen before on-screen. Much like his colleagues in the "Taxi" TV series before him, Max sees this as a temporary occupation to pay the bills while waiting for a break in his dream business, yet he's managed to master it to such extent, he can calculate with precision how many minutes he'll save by taking a certain short cut.

Tom Cruise's Vincent may be in a different line of business but his expertise is not altogether different from Max's; he knows how to pass undetected among crowds, he's learned the right spots where to hit an opponent in order to quickly and effectively disable him; he handles a gun as if he'd learned to shoot in the cradle. 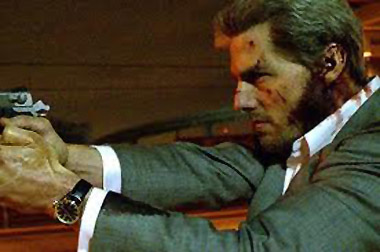 Does he feel like a character from real life? In many ways, yes-- though he seems a bit too sensitive for someone in a line of work which would require more than a little lying to oneself. Cinematically speaking, the character works just fine and the movie makes the point that under different circumstances, these two men could have easily been friends. Max slowly realizes nobody before has ever understood his predicaments like this cold-blooded murderer has, but the same goes the other way around too: when Max tells Vincent "the standard stuff in normal people you lack" this just tears down Vincent's charade and all the petty talk the latter has used throughout the film in order to justify his job. We can clearly see how hard this realization ends up hitting him. 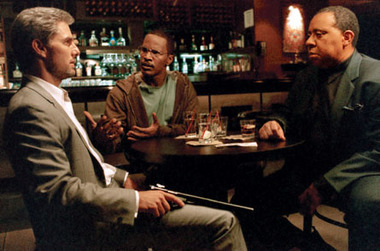 The screenplay makes a couple of rather lengthy stops to introduce us to one of Vincent's victims as well as his employer. Was it necessary for the movie to take its time telling these stories? I believe so. Without meeting a flesh-and-blood victim and the man behind the murders, I doubt Vincent's profession could have made much of an impact with the audience and it helps that both men, like all secondary characters in the picture, ring just as true as the leads.

Especially terrifying is Felix, the drug lord whose Santa Claus speech may not have seemed much on paper; Javier Bardem manages to deliver it in chilling fashion (and with zero Spainish accent, I can attest); again, here this character feels as if it was surrounded by actual drug-muscle-men in the type of spot where you would imagine these people hanging around, with the kind of Tex-Mex ambiance and music that such real life men are known to appreciate. 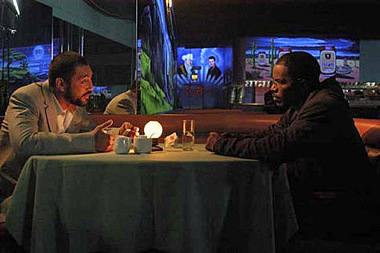 Unfortunately, however, after about an hour and a half in which "Collateral" rings true about as much as any Michael Mann film, it is in its final chapter he seem to transform himself from an auteur into just another Hollywood action director. This is not to say that the closing scenes aren't capably directed but I think a film like this deserved better. In succession: 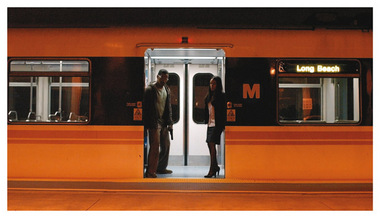 • Vincent's Korean victim stays still in the most visible, dangerous and illogical of places during a shootout, for what feels like an eternity.

• In Los Angeles, Ca. a city of millions, Max realizes that Cruise's next and final target just happens to be the girl of his dreams who, coincidentally, he met a few hours before. He also lucky enough to run into the gun he'll need to protect her, lying around within his reach.

• Max runs into a law-enforcer but instead of explaining his story and what's at stake, he risks his life in order to try to disable him, eliminating any chance of turning this matter into much more capable hands.

• The cell phone stolen by Max finds the worst moment to run out of batteries.

• The professional and capable hit-man suddenly takes a step to the next level and transforms into your typical all-knowing, all-seeing, cinematic killer who, when having to guess which way his targets are heading without a single clue, he will always manage to "sense" the right answer. 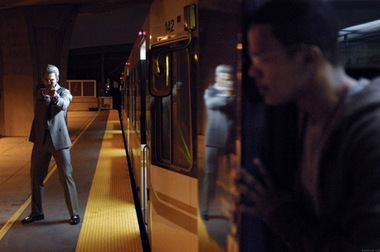 None of these problems lessens the impact of the final duel between both characters on the train which is very good indeed and ends up as a rather believable finale despite the fact that one of the protagonists was obviously a much better shot to begin with.

Apart from the points I've mentioned, "Collateral" clearly had the potential to become an equal to "Heat", a film which just about everybody I know seems to glow in happiness. At any rate, "Collateral" has enough insight into the lives of these seemingly ordinary men to deserve a high ranking in Michael Mann's unique résumé.