The rules of Jean Renoir's "Game"

Long before Luis Bunuel's "The Discreet Charm of the Bourgeoisie" there was Jean Renoir's "The Rules of the Game," a 1939 classic tragicomedy about French upper crust society and its lack of morals. Billed as a "dramatic fantasy," Renoir's sharp-eyed satire was far ahead of its time, and took no prisoners, throwing both caution and political correctness to the wind.

Though filmed in beautiful, timeless black and white, "The Rules of the Game" (La Regle Du Jeu) is arguably the most colorful film ever made. It bursts with energy and life. The film is a multifaceted look at the emotional boundaries and battlefields of love and forbidden passions between men and women. The sexes openly hunt each other like prey, discussing their strategies, targets, regrets and longings with each other and amongst themselves. Mr. Renoir crafts a riveting anthropology of these vacant and trifling human creatures. Each is tinged with irony. Few have time for self-awareness or reflection.

One exception is Octave, the lone introspective member of this ribald, licentious bunch. Octave is played by Mr. Renoir. His charm and playfulness are infectious for several married women at a hunting party in a mansion. Octave is wayward, clumsy and unpredictable, yet he's the moral conscience of the director's film. Octave often circumnavigates this Shakespearean passion play as the voice of reason on its stage. Additionally, two of the film's crucial characters are labeled a "poet" and an "angel", though "dangerous" nonetheless. The adjectives are accurate, due to the poetry and angelic moments that frame Mr. Renoir's social commentary.

Analogies are made between the hunting of animals for sport and the voracious hunt of the human animal for love. A hunting sequence offers the first clues: in the random hunt for love prey will be obvious and inevitable. The animal is repeatedly referenced as a character in "The Rules of the Game." Rabbits fight for their lives. One character wishes he could go down a hole so as not to discern the difference between right and wrong. Early on, a plane lands carrying a character named André Jurieu. He has just completed a transatlantic solo flight. Birds fall from the sky unsuccessfully trying to evade the rifles of hunters.

Though no child is seen in the film, children, or childlike delights are very much a part of the characters' milieu in "The Rules of the Game". One person describes children and the beauty of constantly looking after them as a "sole occupation" but is likely alluding instead to the thrill of obsession and the chase for a man who may be unobtainable. The analogy is apt, as many of the men and women in Mr. Renoir's film are child-like, both in their honesty and helplessness. 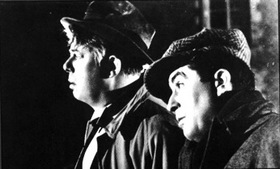 The hunting grounds of "The Rules of the Game" are literally brought close to home as the film slowly merges the game of love and the thrill of the hunt in grand, farcical style. There are layers. Open secrets exist among these people. Deeper secrets and desires are wielded like blunt force trauma to their intimate, captive audience of one.

Love's landscape is treacherous. Everyone is in love it seems, with at least two others. Sometimes three men pine for the same woman. At least two women have multiple lovers. One man has two. Other times people are in love with themselves while their philosophical speechifying suggests otherwise. Such narcissism and contradictions make "The Rules of the Game" scandalous and intriguing. The Greek chorus banter accompanying the farce on display is just as interesting, as is the music and amusing theatrics that serve as a secondary soundtrack.

On the surface the film's vital characters may be vacant but Mr. Renoir gives these sad, lonely figures nuanced backgrounds informing their tangled, complex histories with the sins and strengths of their parents. In documenting superficial people "The Rules of the Game" is a smart essay on behavior and foreshadowing. One of the fascinating things about some of the many players on this fragile chess board is that they will occasionally stop and self-correct -- even in the midst of emotional chaos -- and remind themselves that rules are very much the order of the day. This is often depicted in a cheery, breezy almost irrelevant manner. 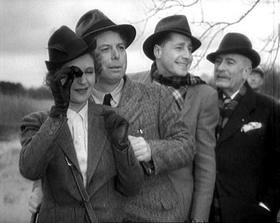 "The Rules of the Game" caused a stir during its initial release in 1939, set prior to the onset of World War II. Mr. Renoir's scathing examination of unrestrained hedonism, hypocrisy, class and adultery made headlines. The film was originally one hour and 21 minutes in length, but following a bombing raid during the war, much of the original print was destroyed. In 1959 however, the film was reconstructed, with 25 minutes of previously unreleased footage added, to form a new 106-minute version of the film. Jean Gaborit and Jacques Durand revived the film with the director's blessing. The 1959 version is the one the world is most familiar with. (An in-depth treatment of the film's reconstruction is provided on the Criterion Collection edition two-disc DVD of "The Rules of the Game," which I highly recommend.)

Cinematically, a shrewd orchestration of Mr. Renoir's excellent film lies in its contrast of humans with inanimate objects. In some scenes the director often frames actors touching or standing next to figurines both large and small to illustrate duplicity in their characters' dispositions or an evolutionary insignificance in the characters' very existence. The backdrop in two examples: a mildly offensive black figurine (widely collected in the 1930s) or Asian historical faces or artifacts, which two characters essentially pose with. Later in the film the symbolism is reflected in a musical menagerie featuring a quick glimpse of a picture of a small, naked lady. 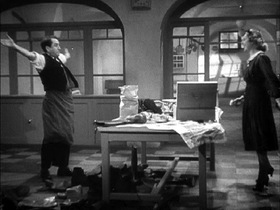 "The Rules of the Game" also utilizes wide angle and long lens camera work to lend distance, remoteness, context and an irrelevance to the situations involving this ensemble of simpletons. The background in many scenes reveals a busy landscape with a constant dynamism and depth that keeps the film moving exuberantly.

Jean Renoir's film indicts the rich and their pathetic little affairs. Like all great satires "The Rules of the Game" maintains realism and a gravity that is sometimes painful and tragic, yet other times uproarious. The film spares no sacred cows. No nationality, racial, religious or ethnic group can take cover from the withering dialogue of Mr. Renoir's astutely observed screenplay highlighting ignorance and the ignoble. The script also looks at love across class lines and how those lines get crossed and the consequences of such transgressions. 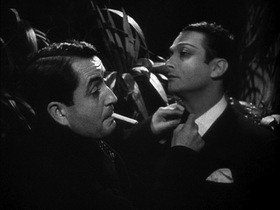 Every time you watch "The Rules of the Game" you revel in it and discover something new. I've seen the film on a number of occasions and have enjoyed it differently on each one. I never tire of the lessons it teaches, the entertainment it provides, and the wonderful dialogue it showcases. Every word spoken is uttered for a reason. Mr. Renoir, the director of "Grand Illusion," provides a grand illusion of manners, rules and sincerity, coupled with a meaningful celebration of the wild, funny and mysterious ways of the human heart.

The photograph at the top is by Richard Avedon. 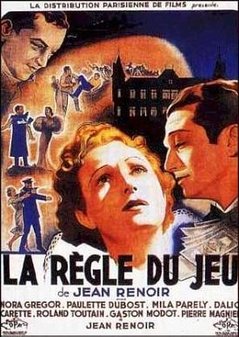 The complete film is online on YouTube. Here is Part One: