The man who decided to go along 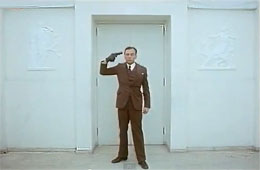 Shrouded behind the frostbitten windows of an idling vehicle, Marcello Clerici (Jean-Louis Trintignant) peers out at the snow-covered French countryside where a political assassination takes place. Driven by another member of Mussolini's Fascist government, the jittery man in the backseat has traveled through the night to reach this mission, but it is in the journey that Bernardo Bertolucci's striking 1970 drama, "The Conformist," takes shape. An adaptation of Alberto Moravia's 1951 novel, the film details the inner working of cowardice, using Marcello as a supposed idealist defined by his cage in 1930s Italy, and through his pitiful struggle against independence explores its futility at every turn.

At the heart of Marcello's turmoil lies the parallel between politics and sexuality - a line Bertolucci would continue to tread from his next film, "Last Tango in Paris," through to his 2007 French New Wave tribute "The Dreamers." In the callow cipher of Clerici though, a violent boyhood seduction by his male chauffeur, Lino (Pierre Clementi), has cast an instinctive drive to blend in ever since. 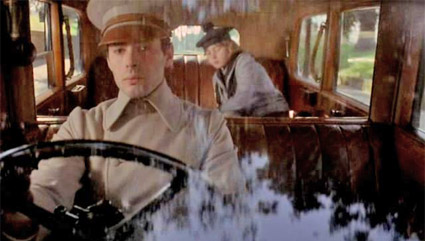 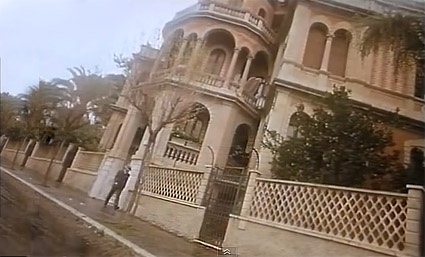 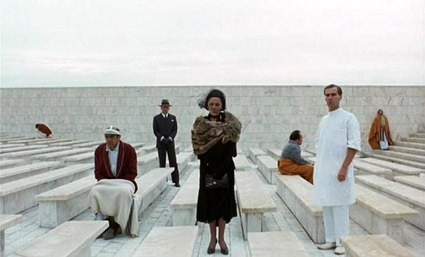 Now middle-aged and living in Rome, he seeks to remove himself both from the gaudy indulgences of his mansion-bound mother, and also the institutionally led life of his mentally unstable father. However, within the state-centered needs of Fascism, along with his recent marriage to the naïve but loyal Giulia (Stefania Sandrelli), Marcello discovers an impeccably banal opportunity for government service in which to disappear. As the mission then trickles down to convert his Paris honeymoon into a hit on his anti-Fascist former professor Quadri (Enzo Tarascio), he must choose between an impulsively-thrilling affair with the professor's wife, Anna (Dominique Sanda), and keeping his responsibilities in line with the state's suggestion. 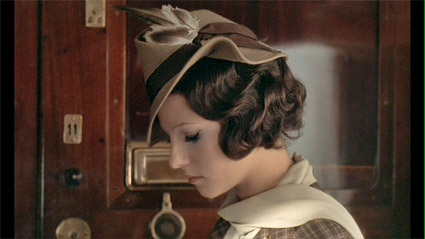 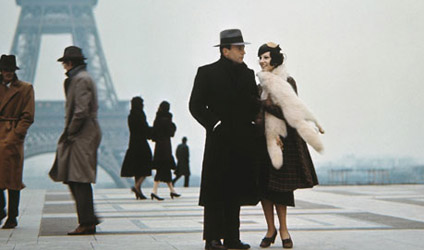 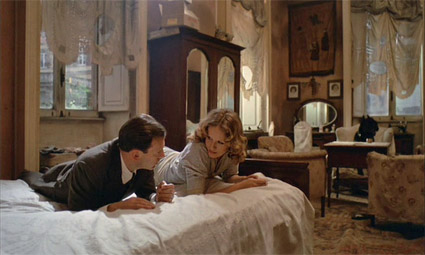 As Caprici, Trintignant creates a frustratingly precise portrait of submission, one that draws sympathy just as quickly as a deplorable decision erases it. His actions, which initially appear measured in their purpose, quickly evaporate into obedience made physical by a simpering shuffle after a superior's request. "Duty, elevation, and conquest" are the values he holds dearest, but while Marcello ambles dangerously into the depths of political consequence, his wife Giulia proves herself genuine by the simple fact of her ignorance. Whether by a combination of love and self-preservation, or perhaps just stupidity, she never questions her husband's business, rejects Anna's playfully sexual advances even as she takes quiet pleasure in them, and instead settles for her perfectly-average life filled with simple purpose. In a way, she is everything Marcello despises, but the exact image of consciousness he also hopes to attain. Sandrelli infuses this role with a fantastic child-like approach, and her scenes with Sanda -- their sensual dance during a night out in Paris, a conversation in Anna's home beforehand -- are some of the film's most memorable. 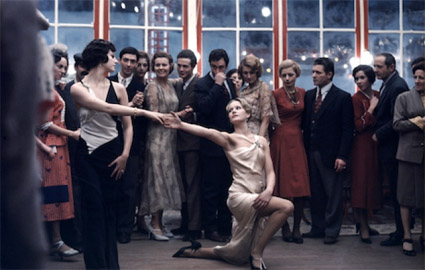 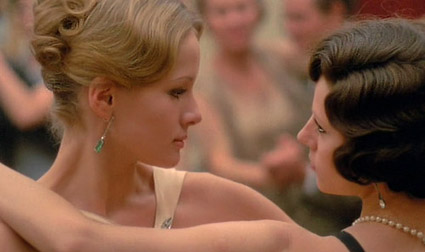 Flitting from Marcello's traumatic childhood to the road-centered day of the assassination, then back to the honeymoon just prior, Bertolucci crates one of the finest examples of narrative bewilderment bolstered instead by tonal and emotional coherence. For the most part, "The Conformist" follows a standard plot of governmental intrigue, right down to the trench coats stolen from Jean-Pierre Melville's wardrobe, but in every other way the film expertly subverts genre and expectation. Cinematographer Vittorio Storaro - creating some of the most luscious images ever filmed - captures the characters' emotions through framing, reflections, and saturated hues of blues and reds, even when the characters themselves are unsure. Production Designer Ferdinando Scarfiotti ("Death in Venice") also blends his work perfectly with Storaro's, rendering the 30s and 40s time periods with perfect touches that allow Bertolucci maximum freedom with his camera.

While visually the screen is absolutely bursting with content, Georges Delarue's jaunty score at first proves over-bearing, as if synced to the wrong reel. Initially the tone is jarring, until one realizes the stirring, upbeat accompaniment is present only when Marcello is onscreen, and then shifts into more plaintive, wandering territory as others take focus. It's suddenly clear that Delarue has created the heroic Bond theme Marcello has truly pursued, one that owns both his fearless duties and affair with Anna, but as depicted throughout that vision will remain unrealized anywhere except the score. There are no lavish drinks served here without a bitter truth behind them, and no appearance of gunfire without the stark reality of what a complacent position really means in the face of danger. 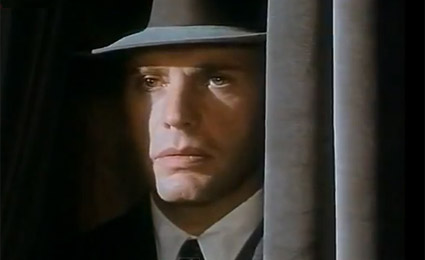 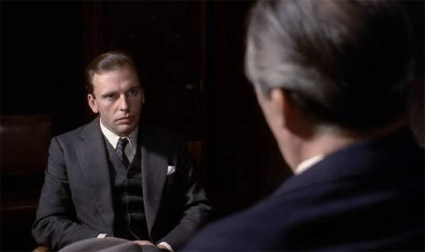 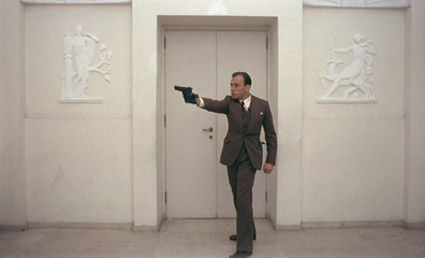 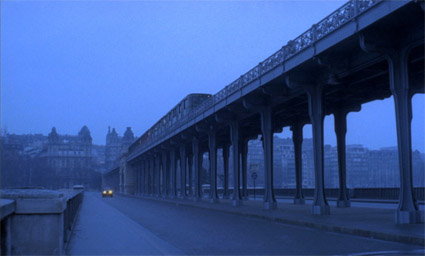 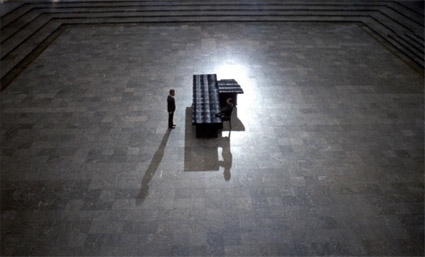 The film's aesthetic and narrative elements abruptly switch gears in the climax, as Marcello's car finally traps Quadri and Anna on the road between him and a roadblock. Of course, Marcello will not perform the killing - he's just the puppet who remains uninvolved - but still he is forced to attend. However, as up until now the film has played so eagerly with time and space, the camera suddenly pauses above the trees in a wide shot, reflecting on the situation below for too long to be anything other than suspicious. The sun refracted through the tall, slim trees calms the atmosphere, as though the entire enterprise was instead to rendezvous for a winter hike, but clearly something more menacing is meant. As Quadri finally gets out to investigate the problem, the instant tension of reality sets in amongst the silence, while faceless men quietly creep down the hill to his left through the fog, Delarue's score now completely replaced a soft wind. 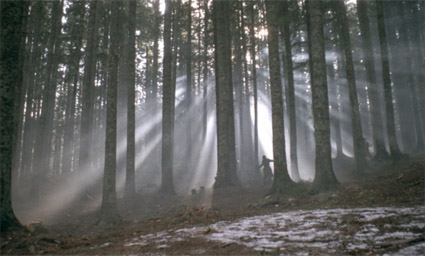 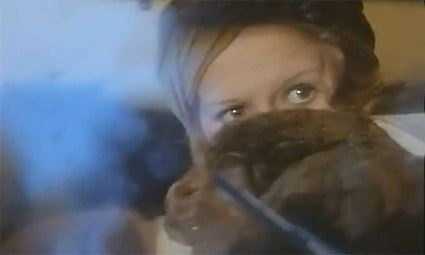 Because of her intimate exchanges with Marcello, Anna knows what's about to occur, but in the end she's forced to watch speechlessly as her husband is stabbed dozens of times, then fleeing towards Marcello's car in a fit of panic when they finally turn on her. She reaches Marcello's window, and in a prolonged, brilliant shot, Anna wordlessly pleads for help to his obscured face. She realizes he will do nothing, rage and terror cast across her face, then suddenly in a wildly frantic take, the men sprint after her through the woods, tossing a pistol almost playfully to one another as they each run out of steam. As the inevitability of the situation closes around her, eventually delivered through a gunshot in the head, Marcello watches from the car, unblinking, as she grasps for stability before collapsing into the snow, dead. The men wander off, the redundant mission complete, but in that brief moment of Marcello's inaction to either kill or help, his fallacy is finally exposed to the men around him, and even potentially himself. 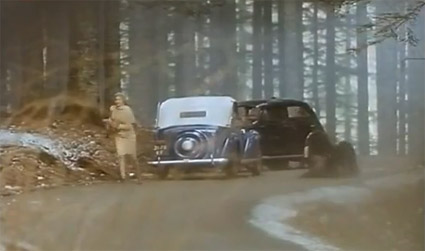 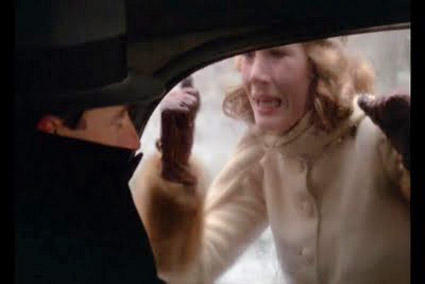 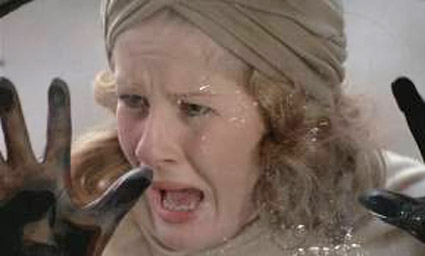 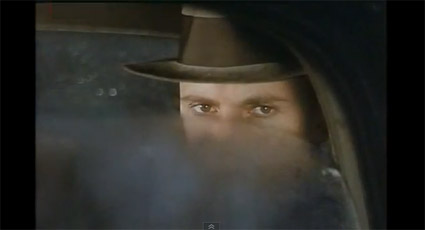 In every scene of "The Conformist," Bertolucci denies the narrative elements in the film to simply exist on their own. Through his off-kilter framing, gradual visual emphasis on minor details, and the schizophrenic yet fluid passages of time, something deeper is always just below the surface. This perfect fusion of elements -- self-conscious in their execution yet never unbearably so -- finds its home when Marcello reunites with Quadri in the professor's study. Being his brightest student at college, Marcello begins to recall his senior thesis, revolving around Plato's Allegory of the Cave. After his thoughts run into embarrassed silence however, Quadri then picks the strand back up, spinning it further into a pointed attack on Marcello's current perception. 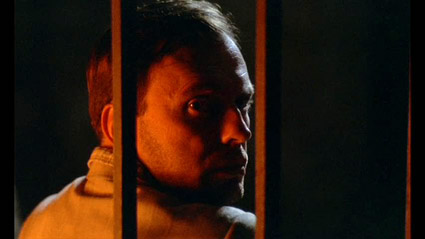 He describes the near-sightless figures in the cave, reacting against the shadows produced by their unseen captors' flames, and during this the room shades are drawn, spreading darkness save for a bright sliver of light through the window. It creates a shadow of Marcello against the wall, creating one visual metaphor too many, but that is perhaps both Quadri and the film's intention. Quadri is using the well-trodden ground of Plato to smother Marcello in his own blindness, hoping for his bright student's incomplete worldview to blossom into a more cognizant approach, but as Marcello leaves unfazed, all hope of that dissipates along with the actual area's light. Luckily, both the film and audience do not, and so we follow the titular conformist to his final realization, closing finally with the shot of him in a decaying Rome alleyway, looking back on the flames he helped create slowly withering away.

Charlie Schmidlin is a writer and filmmaker from Chicago, and currently writes for the Indiewire blog The Playlist.