The inspiring 1979 treasure "Breaking Away" 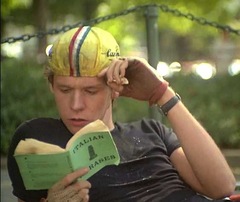 "Breaking Away" is a movie about four working class friends from a college town who are better know as "The Cutters" a term for the stone quarry workers from town who never got to go to college, and how cycling becomes their unexpected ticket into bigger and better things.

It is populated with original characters who feel completely real, they all have their ambitions, their fears and their regrets which are hardly unlike ours. Each of their numerous idiosyncrasies only serve to make them all the more endearing.

As in real life, the good guys are all flawed; the bad guys really aren't all that evil. They come from different worlds, plain and simple.

"The Cutters" were played by, what was (then) called an ensemble of remarkably unknown actors. Dennis Christopher seemed destined for stardom after his participation here and in the Academy Award winner "Chariots of Fire" but somehow he fell of the radar rather quickly. Dennis Quaid went on to became, well, Dennis Quaid. Jackie Earle Haley also disappeared for years and years until his recent Oscar nominated role as a tragic child molester in "Little Children."

Daniel Stern has also appeared in countless comedies as well as the voice of the grown Kevin Arnold in the great TV show "The Wonder Years." Quaid basically plays the sole straight man to his three hilarious friends. But as good as they all are, Paul Dooley as Dave's father comes close to stealing the movie with his constant aggravation about his seeing his only son transform from the all-American Dave into the leg shaving-opera loving (actually "everything-ini" loving) Enrico. 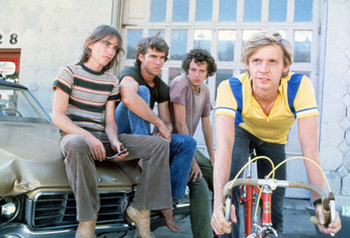 The moment comes into the movie when this closely knit group of friends take their most talented member as a leader into bigger and better things, as opposed to keeping him down for sake of everybody's comfort's, hence the title BREAKING AWAY (at least, this is my interpretation).

Most of today's Hollywood movies have everything money can buy but they often feel like they come out of serial production in which the situations and the characters are just about the same. "Breaking Away is certainly an exemption, while watching it, you might find yourself surprised about how much was achieved with so little, there where no big name stars (not until then anyway), the sets are all real and from mostly modest settings (a car wash, a bowling alley, the town quarry, an used car lot), the extras are mostly locals. This doesn't mean the film falls short in production values in any way, it simply didn't require anything else for the movie to be great. 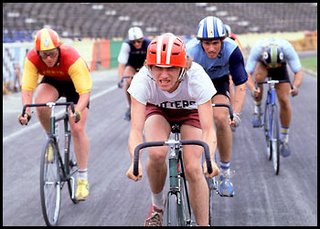 "Breaking Away" won the 1979 Academy Award for Best Original Screenplay for Steve Tesich, and was nominated for Best Actress in a Supporting Role (Barbara Barrie), Best Director, Best Music, Original Song Score and Its Adaptation or Best Adaptation Score and Best Picture. The film is 8th on the List of America's 100 Most Inspiring Movies compiled by The American Film Institute in 2006 and when you see it, you'll instantly know why.

I live with the idea most of us in the audience are constantly looking for new movies more than for good ones. That's why I'm no longer surprised how many people I know haven't seen "Breaking Away". This is a film which I can all but guarantee that given a chance will become one of your favorites. 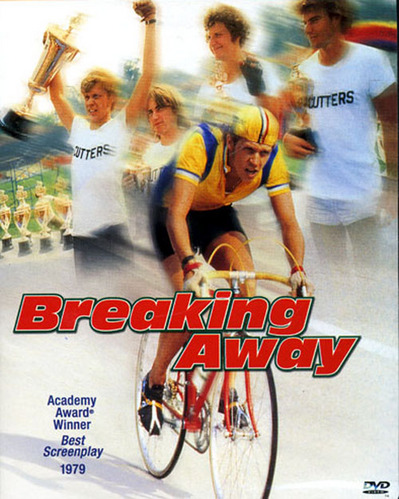