The Caustic Cruelty of Remorse

I find it easy and necessary to forgive the sources of my wounds. Most of them. I find it impossible, however, to forgive others for wounds inflicted upon my loved ones - especially my friends, siblings, children, and parents - even when the victims themselves are forgiving. But, most of all, I'm often imprisoned by my own remorse for the real and perceived impact my choices have had on others. Remorse is a vicious debt collector that knocks on the door to my heart on its own erratic schedule. Such is the case with Will Smith in Gabriele Muccino's "Seven Pounds" (2008).

The movie sets its stage with three opening scenes. First, extreme closeup. The dramatic phone call: an exhausted Will Smith calls 911 to announce a suicide, his. We assume that this is the end of the story and that the rest of the movie will tell us how to get there. Second, floating. Smith grants our curiosity a small nugget of explanation: we find him swimming in bright blue waters, while he narrates to us that in seven days God created the world, yet in seven seconds he shattered his own. Third, after some narrative progression (perhaps following his swimming spell), Smith - now dressed in tie - is again on the phone. He badgers Woody Harrelson, a friendly call center operator about some non-existent meat order. And, Harrelson is blind; we know that in the movies, characters are rarely blind ("Scent of a Woman" (1992)), deaf ("Copland"), or mute ("The Piano" (1993)) except in the service of story. We do not see much of Harrelson, but because we recognize him, we know we will see him again. In any case, the call ends abruptly, and Smith covers his mouth perhaps in horror over his misconduct, and starts rattling off a number of names he seems to struggle to memorize. On a side note, I wonder if all those internet trolls, whose anonymous contributions to website comment-sections are limited to nonsensical vitriol also have their moments of remorse.

In any case, the atmosphere is set. Three connected or disconnected scenes that will be glued together over the next two hours until Smith reaches that suicidal call. We know that as the present day story moves itself forward, it will also move us backwards, carefully revealing the final, original details. Meaning, this movie keeps us not only asking "What happens next?" but also "What just happened?" In other words, we are trying to get inside Will Smith's head, trying to figure out what is happening behind that pained expression.

Further, when watching such nonlinear movies, I also wonder if the story is indeed best served by jumping around its chronology. In "Pulp Fiction," it is very effective because we do not expect it. In the whole television series "Lost," before it itself becomes a plot device, the narrative-time-travel compels us to think that each of our subtle and exaggerated expressions - each blink, each stare, each smile - is the consequence of specific past experiences. In "Seven Pounds," the non-linearity is not necessary: the story is dramatic enough that it would work well chronologically, showing us the result of a cataclysmic moment in a person's life. In its narrative, however, the unveiling of the past adds a dimension of tension as we get more involved in the central love story, between Smith and Rosario Dawson. As we want them to develop in love, we expect that their love is doomed.

But, it is in the nature of remorse that it buries itself so deeply in a person that it is easy to forget. Then, at some semi-random moment, something triggers the feeling of emotional quicksand, and the paralyzing reflex exposes itself. Meaning, as we live, we do not live exclusively in the present. You see a tree or smell a scent or hear a voice, and you are triggered. Your memory carries you momentarily into the past. Or, your hopes and fears propel you momentarily into the future. As our smart-phone era consumes more of our peripheral visions, it seems that we live less in the present, and more in the imaginable worlds of digital screens, hitting "refresh." How tempting is it, when you get on an elevator, or behind the wheel, that you immediately invest your moment in the imagination of hope: you check your smart-phone for that one hopeful email or text message, at the cost of the potential smile from the person standing or sitting next to you? So, this film jumps around in its chronology, perhaps because we tend to jump around in our thinking. And, remorse is one of those feelings that keeps coming back to strangle us with the past.

At the heart of this film is that developing, tender relationship between Smith and Dawson. He visits her as an IRS debt collector, feeling an un-tax-collector-like compassion to help her. We notice immediately that this federal agent makes moral judgments, which, outside of Hollywood movies is probably not a good thing. She is a greeting card printer with a big vegetarian dog and a dying heart. His heartbreak is emotional; hers is congenital. Both are substantive. She is the one dying but wants to live, but he is the one who cannot live, except to die. And, her dog is no ordinary dog; she has a Great Dane: the dog with the broken heart. Nearly every person, every animal, in this film is wounded, including the neighbor's rose garden. A few characters, however, cause wounds. 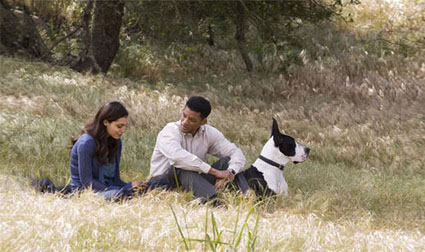 As we watch them heal each other, there is something so uniquely genuine there, perhaps because their developing love comes through quiet unrolling conversation, cautious unveiling of biography and emotions, and semi-random acts of selflessness. Hollywood and Bollywood love so often annoys me because it is usually more infatuation than love. Unlike a few elements of the plot, the smiles and tears here, and there are plenty of them, seem genuine. Meaning, the people in this film smile out of friendliness, embarrassment and gratitude; they cry because they need the merciful release, but try to withhold the tears. They cry because they want to have hope but are afraid to.

Smith is so wounded, that he longs to open himself to someone else's touch, but refuses to let anyone in. When he speaks, he seems excessively posed, almost as though he is in a job interview, yet his eyes betray him. He looks like he either has run out of tears, or is longing to feel them. But, he hides himself from himself, and thus from all others. His expression seems to beg, "Help me." Dawson is so tender, yet so strong. She is his damsel in distress, ready to save him. There is a moment in the film where she is getting out of his car, and turns back to talk to him. For a couple eternally long seconds, we see only her smile in the door's window frame, and it seems to fill up the world, especially his. But, both have deadlines. Her deadline is at the dictates of her failing heart; his deadline is at the behest of his broken soul.

But, remorse is also inconsistent, if not hypocritical. I don't know that remorse is a real emotion; if remorse was genuine, it would be far more consistent. Smith in this movie feels remorse over a few very, very specific events, yet manages to be deceptive, abrasive, manipulative and even violent not only to those who do not fit in his plan, but even to those close to him. I wonder, then, if remorse is actually a mask, a form of deceit, at least as self-deception. Remorse in this film seems to be the a mask hiding the simple needs of a sort of survivor's guilt, which might even mask the deeper needs of loneliness: the need to give love and to be loved, and deeper than that, the need to heal as a way to fulfill the deeper need, to be healed. So, the key to self-forgiveness may be not to accept that the seven seconds of indiscretion were a mistake, because that part is obvious. Rather, the key may be to change behavior and reform, and keep remorse at bay. And, this is something that Smith does not do. Instead, when some moment of light reach his heart, he falls back into painful flashbacks, and then must cut a piece of himself off from himself, and let someone else deal with the mess.

This film is after all, a parable. Any film that has a jellyfish floating in a tank in a low rent motel room is either a late night film with forced dialogue or a carefully constructed allegory. The story is told in phases of appropriate music. The camera focuses on something in the background, and adjusts focus to reveal something in the foreground, just like the narrative. But, I don't know what the "Seven Pounds" means, except as a debt, seven debts. Internet commentators refer to Shylock's sentence in "The Merchant of Venice," but that does not make any sense to me. Nevertheless, the title gives the sense of parable.

This quiet film follows up the collaboration between Muccino and Smith from "The Pursuit of Happyness" (2006). That film was about a man keeping his head above water while the concrete slabs of urban society crash down on him. This film, however, is about a man drowning in his own sweat as his poisonous personal demons strap to his arms like the tentacles of a carefree jellyfish. It is refreshing for how often it defies Hollywood convention, allowing us to overlook those moments that we have to ignore the secondary holes, and those other moments it falls into Hollywood traps.

I don't know that this film has a happy ending. I found the film to be wonderfully emotive, though many will regard it as schlocky melodrama. But, it does seem to make the point that most of the anonymous people we will ever meet or ignore, are decent genuine people with genuine emotions swimming in all kinds of directions in the same giant ocean.