Swimming an ocean of emotions 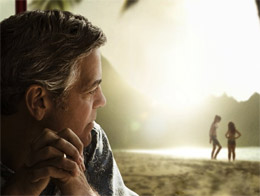 There are some American suburbs that are notorious for their high concentration of high powered parents who excel in their high class careers, spare no expense in raising precisely crafted children, and in the process completely abandon themselves, their spouses, and their children. That is one level of Alexander Payne's "The Descendants." This is such a rich movie that I'll have to watch it a few times to fairly appreciate all of its layers.

George Clooney is Matt King, a driven Hawaii lawyer who has ignored his family more than he realizes, though now he realizes it. His wife is dying, his daughters are uncontrollable, his extended family hangs together by a dotted line and dollar signs, and the news gets even worse. In public, he is known by all as King, but at home he is an emperor, and his daughter knows that he has no clothes. This is the story of a mild mannered man reaching for the browning leaves cluttering his stagnant swimming pool to hide his emotional nakedness. He shakes. He quivers. He ponders. He thinks. He lives in America's heaven, but feels like he is in Hell, and then things begin to fall apart.

I sometimes think that in our culture, the greatest sin is not murder as much as it is betrayal. More than Iraq, we remember Bush's lies. More than Clinton's sanctions on Iraq, we remember his philandering. More than Pilate, we remember Judas. And, at the forefront of this story we follow a tale of betrayals of love, of family, of clan, and society. King keeps getting betrayed by family, friends, and colleagues, and those betrayals steadily enter deeper into his private space. 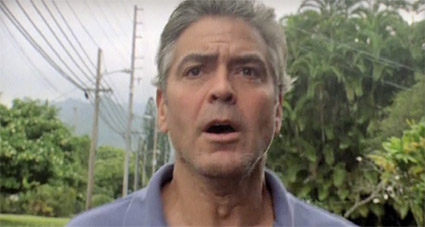 So, what would you do if you found out that the house you diligently struggle to keep in order is as flimsy as a spider web? The silk of the web is stronger than steel, but no house is more flimsy. What does Clooney do? He reconnects with his elder daughter as they proceed into an investigation, looking for the thorn of the tree that drop kicked them out of paradise into a free-fall of frightening emotions. And, they find him. But, in the process they also find out that they are not predators seeking to thrash their enemy. Rather, they are in pain, looking for the disease that caused their pain, and discovering that the cure is to accept circumstance without causing further pain. Forgiveness.

At the backdrop of this story, however, is something also very American: Hawaii. That while we Americans quibble over the narcissism of personal appetites and ambitions, the world politely complains that we do so at its expense. Matt King is Haole: he is a Caucasian American of some Hawaiian blood, with a century of history, but is socially and sociologically White and thus distant from the "locals." While India was the Brit's Jewel in the Crown, Hawaii is ours; like those particular Brits still in India, those particular White Americans in Hawaii know no other home, yet still seem like tourists always preserved from the locals in special glass offices, beach side bungalows and lush green yards. And, King has to decide if to dispose of a huge verdant estate to enrich his extended family, or to maintain his loyalty to his land and his lineage by maintaining the land as is. The Haoles in the film demand that he sells the land for huge profit, while the locals ask him to reconsider. We get the feeling that that last thing the royal family wants to hear is that their sole trustee, their sole bridge to immense riches is feeling pangs of a self-righteous conscience. And in the middle of that tussle, King is Leary and constantly out of breath. But, he makes his difficult choices and we appreciate them. Loyalty.

Payne's film is wonderful for its layers and its genuine sentiments. Every few minutes, when we learn something new, the film avoids predictable choices in favor of somber and sunny reflections. While we can each predict the overall arc of the film, I did not know what would happen in those next few minutes. We pause for moments of deep tenderness without halting the progress of the story. We laugh, then gasp at our laughter, then laugh again, then apologize. In an especially painful moment, a young man starts laughing at a woman suffering from Alzheimer's disease. We know it, the characters know it, but she does not. At other times, because we know back story, two conversations take place simultaneously, though only one person is speaking. 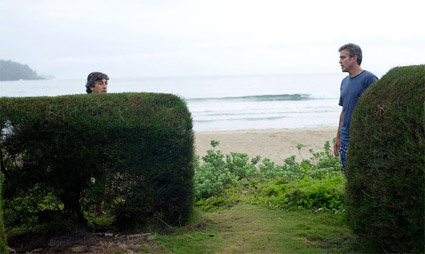 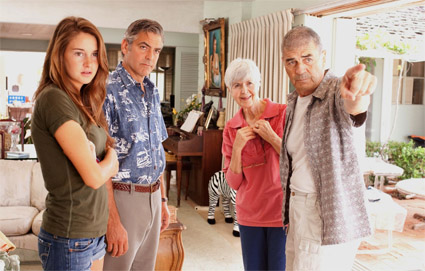 On the flip side, he has his delicious stock characters: the sharp tongued girl, the warm hearted dimwit, the soulless opportunist, and, many side characters who seem perfectly placed in their lively habitats. He also embeds his narratives deep into their locations. "Election" is most thoroughly a High School film. "Sideways" is a road movie across California. Here, we are in a chase film as we taste from the sounds of Hawaii. Hawaii is especially unique because it is officially American, yet Hollywood's America is usually a big city, a suburb, or the country. And none of those settings are quite Hawaiian.

Most of all, however, this film is about those moments in life when our battles choose us before we choose them, and we gasp for air as we struggle to keep ourselves, our families, and our societies together. I suppose, in the end, that the film teaches us that it is possible to lose the shirt off your back without losing your spine, though many in the film might disagree.