Omer M. Mozaffar January 13, 2016
Tweet
While “Star Wars: Episode VII - The Force Awakens” picks up on the "Star Wars" narrative by extending the story forward while looking back to pay homage, it also expands upon its folklore. We have new and old characters, new and old gadgets, but we do not learn as much about the Force as we do about the evolution of its mythology. Some of the material would please Joseph Campbell. Some innovates.

The narrative frames the battle between Jedis and Sith (now, the First Order) as the battle between the two sides of the Force. I never understood what “balance” meant in the films, if the goal was to eradicate one side of the Force. Nevertheless, that contrast between light and dark finds a twist in "The Force Awakens" (TFA). The two Death Stars of the Original Trilogy (OT) dwelled in darkness. The Star Killer base is the galaxy’s darkest device ever, designed to destroy multiple worlds at once. Yet, it gains its power from the sun, the source of the light.

With such a stage as a full galaxy, all the "Star Wars" films feel large. Mythology comes from our aspirations to reach beyond our selves into a larger world. Medieval European Churches were colossal as an expression of the greatness of the Divine, against the smallness of the believer. The believer walks into the large sanctuary and submits. Today, space exploration takes on the same role, with photos of the Universe illustrating its incomprehensible size, illustrating our irrelevance in the cosmos.  Paleontology does the same, reconstructing giant dinosaurs.

The "Star Wars" films express size with the Empire’s fleet, representing its might. The primary expression of their strength, however, was in that Death Star. In the Prequels, the Death Star was a concept. In the Original Trilogy, the first Death Star was the most powerful weapon, until it was overtaken by the larger Death Star II, which was overtaken in TFA by the colossal Star Killer base.

But, that is half the mythology; the other half is that material size does not reflect true might. The ongoing battle between the light and dark sides of the Force mask their implicit battle between the world of principle and the world of power, with principle winning. In “The Empire Strikes Back,” Luke cannot imagine levitating a large X-Wing Fighter, yet Yoda, himself a fraction of Luke’s size, accomplishes it.

This point plays out, perhaps unplanned, in TFA’s climax. The destruction of the giant Star Killer base, in theory the largest explosion in the galaxy’s history, feels like an afterthought, compared to the drama of not only Kylo Ren’s murder of Han Solo, but even his lightsaber duel against Finn and Rey. Even R2-D2’s rebirth captures more attention.

The reason, of course, for the greater importance we give to Luke Skywalker’s meeting with Rey, or Han Solo’s death is that we have had decades of relationships with them. Seeing them again was a moment of nostalgia, which leads us to another element of the new mythology.

Through these seven films we shift from prophecy, to legend. Prophecies compel us not only to look forward, but when they speak of success or conquest, they inspire us to coerce the present into the future. We see this in our planet today, with religious groups doing whatever it takes—including violating their own religious principles—to strong-arm the arrival of their savior.

Legend, in contrast, is an admiring view into the past, and a hopeful, adventurous peek into the future. In the prequels, the Chosen One was to bring balance to the Force, and the Jedi wagered on the wrong candidate. In the OT, Luke followed legends of the Clone Wars, hoping to also be a hero, not knowing he himself is the fulfillment of prophecy. 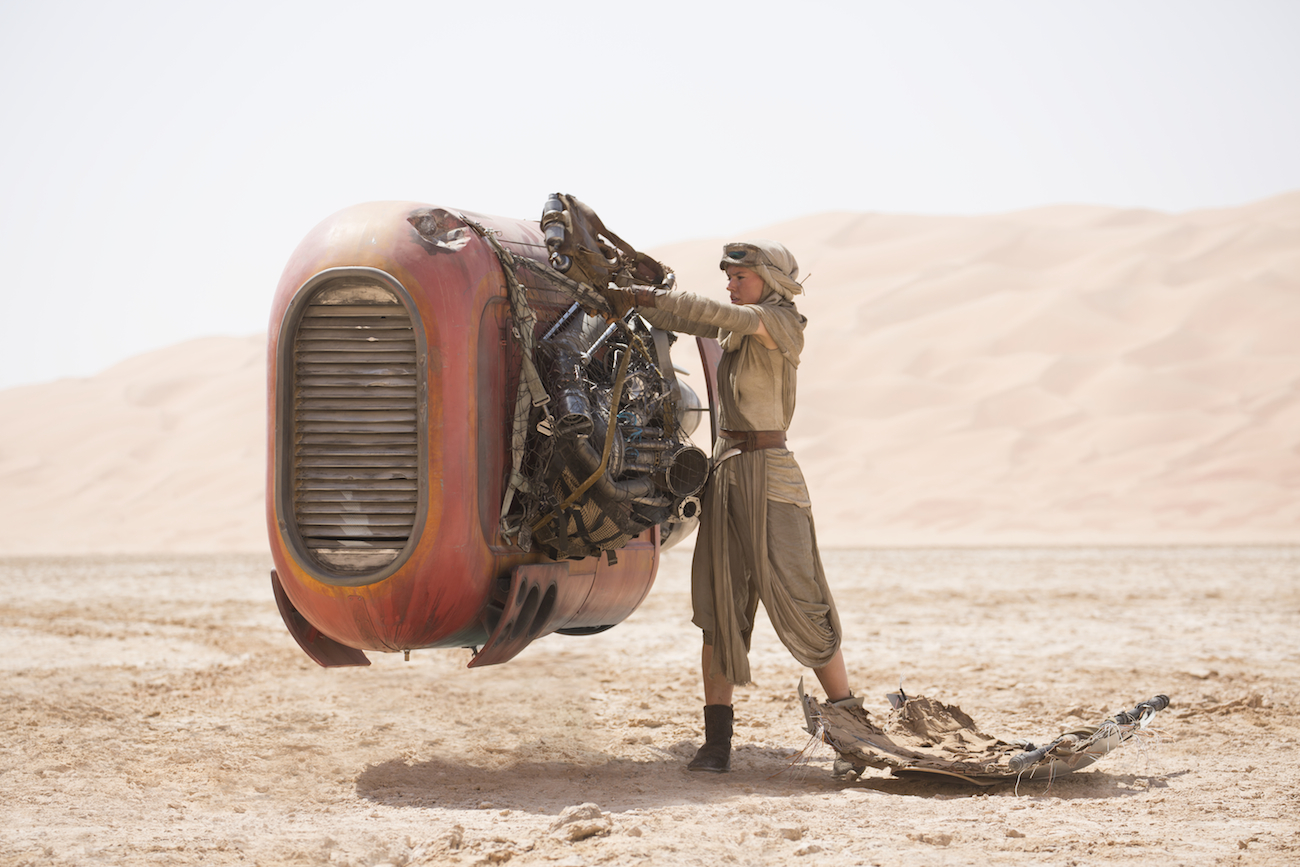 In TFA, however, the prophecies have been fulfilled, and we now live in a world—especially in the planet Jakku—of artifacts. When we first meet Rey (Daisy Ridley) she is a scavenger, an archeologist, digging through the fossils of fallen star destroyers. Some of her explorations involve finding scrap parts to trade for food. Other discoveries, like helmets of forgotten rebel warriors, take her to imaginary worlds that may have existed. Rey and Finn (John Boyega) now speak of the Jedi, Luke Skywalker, and Han Solo as heroes from an enchanted era long gone, almost forgotten, perhaps fictional, until they meet Han Solo himself. The difference now, however, is that we have no prophecies, but hope remains.

In Rey, we find another variation on the Star Wars tradition: female mentors. Though there were female Jedi, all the key Jedi in the films thus far had been males, all the mentors were males. She gets discovered by potential mentors, but she rejects. Unkar Plutt is her boss and she bucks him. Finn offers her a hand, and she rejects him. Han offers her a job and she declines him. She does, however, listen to the females: Maz Kanata (Lupita Nyong’o) and General Leia.

Some of the influence might be from the Disney princesses. Rey joins Snow White, Cinderella, Sleeping Beauty, Ariel, Belle, Jasmine, Pocahontas, Mulan, Tiana, Rapunzel, Merida, and Elsa. The formula for the modern princesses (Ariel through Elsa) is that they are young women prevented physically, institutionally, socially from finding fulfillment. If the parents are present—and usually they are not—one (often the father) is a dimwit or a tyrant. The princess must break her society’s rules in order to find her destiny, and she succeeds.

On the other side, in Kylo Ren, we do not yet know his desires behind his mask, except that he longs to fulfill his grandfather’s mission. We do, however, find something in common between him, Finn, and to lesser degree Rey and Maz: unmasking. In the prequels, the villains—Darth Sidious/Palpatine, Dooku, Grievous—hide until they have to get ferocious. In the OT, heroes wear masks when they need to free someone, either Luke and Han seeking to rescue Leia from the Death Star, or Leia seeking to rescue Han from Jabba the Hut. The final mask—Darth Vader’s—comes off after Luke saves him from the dark side, and it kills him.

In TFA, however, masks come off, revealing humanity. Finn removes his Stormtrooper helmet after he could not follow orders to kill villagers. Kylo Ren reveals his face a few times, expressing his struggles. Still, after the physical masks drop off, they wear metaphorical masks. Meaning, both still resort to lying to achieve their goals. Finn lies to Rey, BB-8, Han, Chewie and Maz to stay alive and escape the First Order. Ren lies to Han to kill him, and perhaps Snoke, to keep his trust.

Maz, however, removes her spectacles for the opposite purpose. While Finn and Ren reveal themselves, she does so to see more clearly into the eyes of her subjects. She has seen the past, and has glimpses into the future.

In, the end, however, the newest change we see from the prequels and OT of the yesteryear to TFA is the shift from the baton to the boomerang. The Force Awakens is the hand-off of the Star Wars commodity from George Lucas to Disney, from George Lucas to J.J. Abrams. Within the narrative, one boomerang is the lightsaber—that weapon of chivalry, honor, and civility—that was owned by Anakin, then stored by Obi Wan Kenobi, then owned by Luke Skywalker, then stored by Maz Kanata, then given to Rey, to give back to Luke. Or, it is that light speeder, the Millennium Falcon—that freighter used to steal and smuggle—that Lando gambled and lost to Han, which was stolen by Ducain, then by the Irving Boys, then by Unkar Plutt, then by Rey and reclaimed by Han. We wonder then, what will happen next to that blue lightsaber and to that spaceship.

We are all waiting to see where things go in Episodes VIII and IX, as well as the other films. It is fair to assume that we will see more new and old.