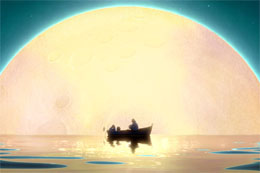 The traditional end-of-the-year list-making craze is bound to dominate the Internet for the entire month of December (as well as stir many a Twitter feud). It's hardly a stretch to foresee that most of the upcoming Top 10 lists will be dominated by three movies featuring remarkable kids. Benh Zeitlin's "Beasts of the Southern Wild", Wes Anderson's "Moonrise Kingdom" and the Dardenne brothers' "The Kid with a Bike" all featured children as characters whose temperament, imagination and sheer physical energy couldn't be contained by the (very different) worlds which they happened to inhabit.

As terrific as all these films were, 2012 saw one more kid-driven masterpiece, which more than likely will get overlooked amidst all the serious canon-forging. Enrico Casarosa's "La luna", the animated short distributed alongside Pixar's adventure flick "Brave," is one of the most beautiful, rich and moving films I saw this year, and yet it's unlikely it will top anyone's list -- as if seven minutes weren't enough to cast a spell, fall in love, or make history.

The Pixar shorts -- to an even greater extent than the much-celebrated Pixar features -- feel like genuine labors of love: self-contained, concise and perfect. When it is not busy rehashing characters known from "Toy Story" or "Cars," the studio is capable of producing real gems of amazing complexity and beauty -- with Teddy Newton's "Day & Night" and Peter Sohn's "Partly Cloudy" as the prime examples. With "La luna", I believe, the studio has produced its short masterwork and it's only fitting that -- just like its titular object -- Pixar's logo is a light source: a hopping, mischievous desk lamp, turning towards the viewer after having pummeled the "i" of company's name down to the ground.

A story of a multi-generational team of sweepers, cleaning up the Moon from the falling stars that keep littering its surface (even as they set it aglow), "La luna" is a miniature with the emotional pull of an epic. The three characters -- bulky Pops, withered Grandpa and a literally pint-sized Boy -- communicate only in faux-Italian gibberish, and yet they speak volumes of how they all feel about each other. The older men are each protective of the kid, and yet can't help but fight each other all the time. The boy looks up to them, but cannot digest the contradictory signals he's bombarded with. As the movie opens, he receives a cap identical to the ones the older guys are wearing -- a clear sign that from now on he's mature enough to share in their labor. Still, Pops and Grandpa don't agree on just how the cap should be worn (with an upward or downward slant), bickering and confusing the boy, who'd like best to belong with both of them.

As the three men await the Moonrise, Michael Giacchino's unassuming, guitar-led score remains as peaceful as the gentle rocking of the boat in the ink-blue sea. It's only when the giant satellite finally emerges that the score swells and the wide screen is flooded in simmering light. In the film's first surreal touch, Pops sets up an impossibly long ladder, orders the boy to climb it way up to the Moon and anchor the boat in one of its craters. Once the kid pulls that off, we are allowed to discover heaps of stars that the team will have to take care of.

One of the most fetching things about the look of "La luna" is the way Casarosa and his team have designed the stellar trash piling up on the Moon. Far from the usual golden glitter, the hundreds of stars featured in this movie have a look and feel all their own. Part cookies, part ceramic trinkets, they emit a warm glow that doesn't seem dangerous in the least -- one is tempted to reach out and touch them without any fear of burning one's hand. In fact, it may be the secret of the film's tremendous appeal that the entire mission the characters have to fulfill has been rid of any sense of peril. The world of "La luna" is safe and cozy -- the only thing in it that needs overcoming is the gruff, prickly resentment between the older men of the family.

When a huge star hits the Moon, shakes it and ends up sticking from it like a giant, intergalactic dart, it's the little boy who comes up with a way of removing it. Pops and Grandpa first argue, then fail in their attempt, while the boy's ingenuity and open mind allow him to (literally) crack the problem. As he administers an expert hit with a hammer to the big star's pointy arm, it disintegrates into hundreds of smaller ones, all settling down in slow motion and creating a spectacle of such wonderment that the heavy eyebrows of both older men are raised high enough to reveal -- for the first time in the film -- that they do have eyes, after all.

If I pointed to an epic dimension of this deceptively little film, it's because -- despite its slight running time -- it still manages to become a full-fledged coming-of-age story. By the end, the boy seems to have successfully endured a rite of passage: he even develops a way of wearing his cap that's unlike either of the ones suggested by his elders in the first scene. As the cleaned-up Moon is reduced to a crescent slip, Pops and Grandpa lower their guard and seem to be enjoying each other's company for the first time. The little guy has simultaneously learned from their experience and given them a lesson in looking at things anew.

It may be a strange confession to make, but I have a great affection for the Moon and its movie appearances. It is true that Ms. Moon (as I was taught to call her by someone very dear to me) has recently been slumming in the atrocious "Twilight" series, but I always think back to her screen glory days and the two beautiful turns in a pair of movies scripted by John Patrick Shanley: "Moonstruck" (1987) and "Joe Versus the Volcano" (1990). Her huge, quizzical face hanging down from the sky in both films served as a sign of renewal for the long-depressed characters. She is the ultimate now-you-see-it-now-you-don't object and, in that, she resembles the happiness we try to pursue and every so often attain.