Peering into the Darkness of the Labyrinth 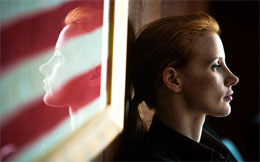 The star of Kathryn Bigelow's "Zero Dark Thirty" (2012) is Kathryn Bigelow. This film is intensely suspenseful, even though we already know the narrative and its ending, or perhaps because we already know. Its drama is all the more compelling because, when listing out all the plot points, this is actually a very straightforward, almost dull story about a chase that, when it completed, was mostly irrelevant. Even the raid on Usama bin Laden's compound was more of a careful trek through a labyrinth than a shootout. Moreover, we know what happens; we are now watching how.

Here, we follow the decade long hunt for UBL. No, we follow an individual CIA agent's search for one man allegedly connected with UBL, as part of that greater mission, which itself is part of the greater mission to stop attacks on American targets. There are three essential parts to this chase. First, the rounds of research seeking any sort of link to UBL. Second, the hunt for UBL's courier. Third, the raid on UBL's compound. And, then, we're done. Problem solved. Or not. 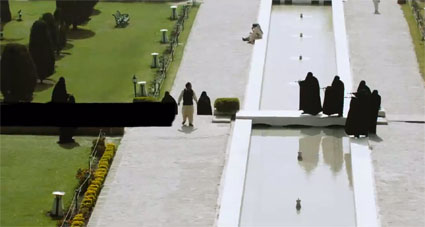 Chastain is Maya, CIA genius recruited straight from high school, which is something I thought only happened to athletes. In each of the film's three sequences, we watch her resolve evolve from a paper pushing fish out of water, to a to fully invested investigator demanding action, growing progressively more aggressive from scene to scene. There is no poetic commentary in her story. Like Laura Linney in "Breach" (2007), she works like an ascetic in the desert, looking for the target, and once he is found, she has a chance to become a human. 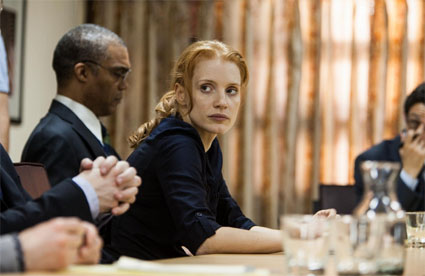 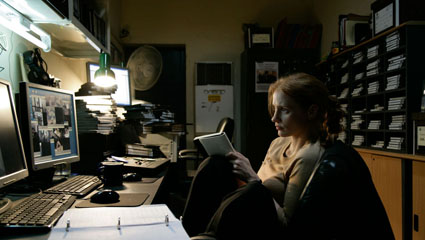 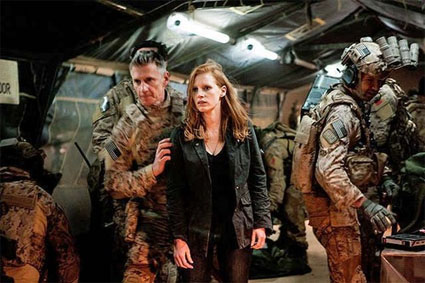 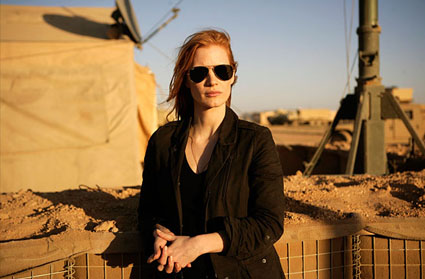 Within the story, UBL has a sort of Walter E. Kurtz quality from "Apocalypse Now." He was, for us, a Supervillain, though here he has a mythical quality like a Minotaur or some sort of shape shifting demon. That sense gets so rapidly deflated when the Seal Team members realize they killed him, having to glance a few times to make sure. In the end, he is just a man.

What then is this story? It is the story of the descent into multiple realms of darkness. To find the needle in the giant haystack, she must cross all of her moral boundaries, and force her way through legal boundaries. The only way to justify this, beyond the attempts to prevent further killings, is that we work not according to morality, but according to goals. There are very few morals in international affairs. Only interests.

While most everyone else in the film is a character type, either as an exhausted agent, a skeptical business suit, a cardboard Pakistani, or a trained soldier, Jason Clarke's "Dan" is especially interesting. For the first part of the film, he is a hot-tempered torturer. In the second part of film, requiring me to glance at him a few times to make sure, he becomes a clean-shaven white-collar agent in Langley, Virginia. That transition was rather scary, because it seemed so...normal. Perhaps he is the person that Maya could become, having embraced his own darkness to accomplish his mission. 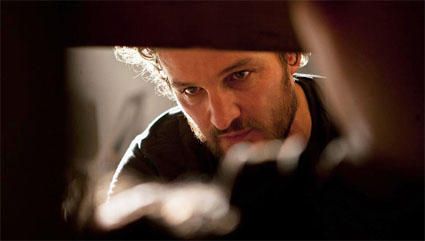 And, with him and the Navy Seals in mind, the violence in this film was far more jarring than the violence in "Django Unchained," perhaps because there were no special camera techniques or dramatic music. Here, people are tortured and/or quickly killed. 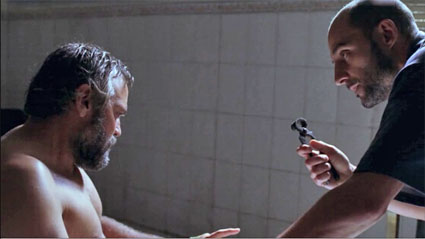 So, does this film endorse torture? Not any more than does "Syriana" (2005). There, it is the opposite situation, though. Mark Strong, playing a mercenary of unknown Middle Eastern origins, tortures American CIA agent George Clooney. In an objective sense, the scenes there are just as brutal as the scenes here. If one of these films does or does not endorse torture, the same goes for the other. On a side note, Mark Strong has since been promoted: he plays a CIA chief here in "ZD30." 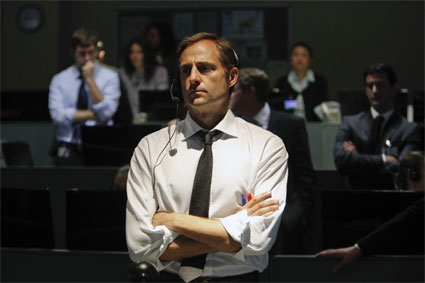 But, there is a simple test. Which would trouble you more: the scenes in the film as they are, or if instead of terror suspects we watched the identical torture of a dog? If the dog's suffering would trouble you more, then this film endorses torture. The point is that the film is not as clear on this as much as our sentiments might be. In the case of Clooney's suffering, I am guessing that the torture repulsed most of us. I hope we were also repulsed by the suffering of the al-Qa'ida suspects, but I am guessing that I am wrong.

Instead, the film skips the moral discussion on torture in favor of the practical discussion, and that is its right. The goal was to (a) stop further attacks and (b) find UBL, no matter what it takes. Torture was used. Black Sites were used. Again, we did something that we could not believe that the United States would ever do. There is that now famous moment in the film when the CIA agents glance at a televised "60 Minutes" interview where newly elected President Obama spoke against torture. The screen was rather small, so I could not tell during the interview if he was wearing his Nobel Peace Prize or if there were drone strikes raining from the sky in the background. The point of this snide comment is that as horrible as torture is, there is every reason to believe it continues, and we are doing things right now that are even worse than torture. So, the question is: once in the darkness, are we able to bring ourselves out of it?

Nevertheless, with such a movie, there is the question of historical accuracy. That we are told this story comes from people within the Intelligence community is already reason to believe that even though we know the whole story, we can safely assume that none of it is true, beyond UBL's death. We can pull from this film whatever we would like, regarding it as fiction or non-fiction as we desire. So, to derive further meaning from the film, I suggest the following double features.

"Syriana" and "ZD30": The two films are very similar in that they have a procedural, investigative quality, sharing minimal information in moving the story forward. And, they share the same composer (Alexandre Desplat), even at times the same score. In "Syriana," we explore a much wider world, exploring the crossover between American political and business interests, and low-income labor and misused religious schooling, and the personal ambitions that jump through all these. "ZD30" would then be one major thread, rather, an artery in the "Syriana" story.

"Argo" and "ZD30": Here, two points would stand out. First, that the CIA might be a newly active production company focused on informing our global opinions. That is the story of "Argo" itself, and might be part of the story of the production of "Argo." This would be basic PSYOP (Psychological operations). Yes, it sounds like a conspiracy theory, but we are already speaking of the CIA.

Second, both films continue the usual nonsensical depictions of Muslims. In ZD30, a van drives through Islamabad or Peshawar, Pakistan (I forgot which city). It gets stopped by some frowning young men, and the token good-Muslim character Hakim (Fares Fares) steps out to find out why. Apparently, the filmmakers did not notice that he speaks to the young men in Arabic. In Peshawar, where he should be speaking in either Urdu, Pashtu, Punjabi, or even Dari, none of which sound remotely like Arabic. That would be like featuring scenes from "Lincoln" in Latin. Or Arabic. Or Pashtu. Second, the young men stop the van because of the presence of White people. The problem with this point is that not only is it difficult to see the people in the van, but the Pakistanis and Afghans in Peshawar are generally at least as light-skinned as the people in the van. It is also rather curious that Fares Fares in this film is of dark complexion, while in most of his photos on the internet, he himself has light skin. 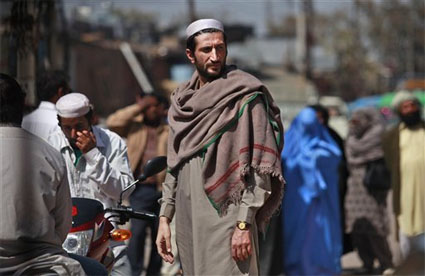 Hakim is a harmless depiction, so I have no complaints about him, and Fares Fares has a dashing presence I hope to see in more movies. But, during the raid on UBL's house, the neighbors in Abottabad expectedly start watching. As they start crowding around the house, they recall the zombie-like Iranians in "Argo." But, again, Hakim starts talking to this crowd, and again it sounded like Arabic (I started zoning out a bit watching the zombies). They continue their slow approach, until he speaks to them in English, which, for some reason makes them disperse. Maybe they did not understand his language on his first try.

There is also the common depiction of Kuwaiti aristocrats, ready to sell out their friends and family in favor of a Lamborghini. I would complain about it, but I have even less love for Arab monarchs than most of the readers here do.

"United 93" and "ZD30": This paring, of course, would be the most expected. But, the point here is that if we join these two movies together, we have a very powerful double feature, and one that I doubt I would ever want to screen. More than that, at least in the film universe, we have a beginning and an ending. Perhaps "Syriana" could be the middle episode of this trilogy forcing us to accept that there is more to the story than the battle against Muslim insurgents. At some literary level, though, the killing of UBL is the completion of the 9/11 story. And, central to the "United 93" plot is that we were attacked unexpectedly by people who were working carefully, and had to quickly ramble together to respond. And, central to the "ZD30" plot is the same point, that we found our man, despite how carefully his team was working, and had to quickly ramble together to respond. This double feature has a quality of Karma to it.

In the real world, I don't know what the killing of UBL accomplished, except to complete the inevitable. Problem solved. Or not. Watching Bigelow's film I find myself thinking that there is and will always be a lot of darkness, even after the Supervillians are all killed.