Out of the frying pan and into more Orcs

Some people hate "Dune" because it's nothing like the novel, but venerate "The Shining" for the same reason. You can't please everyone when you adapt a book to film, so you're better off hoping you'll please anyone. Even if it's just a handful, it's those few who will be your fiercest defenders against the purists. So let's start with what Peter Jackson's "The Hobbit" isn't: If you read the book, it's not the book you read. It includes plot elements from "The Hobbit," details that weren't fleshed out in "The Lord of the Rings" movies, bits from the "LOTR" appendices, and stuff that was created for the sake of this new trilogy.

We all know why, too. As a standalone story, "The Hobbit" had enough material for just one movie: a Hobbit named Bilbo Baggins is recruited by the wizard Gandalf and 13 dwarves to reclaim the kingdom that was stolen from them by a dragon; along the way, the company fights dangerous trolls and orcs, while Bilbo finds a ring that makes him invisible; it all leads to a final conflict. The End.

That brevity won't do for such a lucrative franchise. And Hollywood economics dictates this must be a trilogy. Sporadic insertions of the Middle-Earth mythology were the only way to stretch the otherwise succinct saga over three films. Just the same, any film--whether it's adapted from a novel, comic book, TV series or video game--deserves to be reviewed as a separate entity, and on its own merits.

Whether or not you've read the novels, Peter Jackson's previous installments have set up Middle Earth in a lot of detail. By now most filmgoers know the different species that live there, they've met Gollum, and they're aware that in several years' time, a big bad evil is going to shake things up. Those seeing "The Hobbit" have the benefit of foresight that the novel didn't afford, and whether we like it or not, that necessarily changes how the story is going to be told. So even if the Sauron undercurrent didn't figure into the novel, it seems silly not to acknowledge it in this movie.

Thankfully, Jackson takes the task of materializing Middle Earth seriously. A Tolkien zealot himself, he understands the textures of this place and his treatment of the subject is sincere. Jackson's landscapes are almost an exact replica of what most of us imagined when reading the books. He knows there are fundamentalists out there, and he hopes they'll be just as pleased as the agnostics, which might explain why he spared us Tom Bombadil.

Jackson is especially deft at recreating the different Middle-Earth habitats. I enjoyed the prologue inside the opulent mountain-carved dwarf kingdom. We'd known that dwarves were a mining folk, but the lavish possibilities hadn't quite come across in previous films. There there's Rivendell, a majestic testament to the Elves' symbiotic harmony with nature. And those Hobbit-holes look so cozy, it's easy to understand why their dwellers don't thirst for adventure. 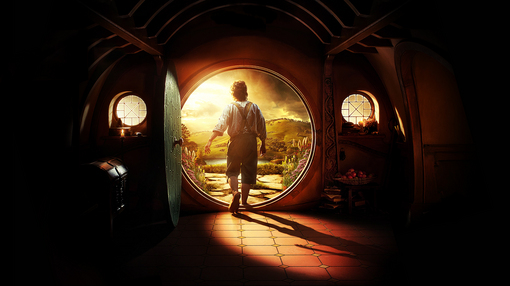 Martin Freeman's performance as the title character warrants some praise. He lends a light comic touch to a movie that relies heavily on slapstick humor and long-winded fighting sequences. In one scene, having just escaped an action-packed sojourn in an underground orc stronghold, the company is confronted by yet more orcs above-ground. "Out of the frying pan," says dwarf prince Thorin Oakenshield, like he was in my head.

That kind of clumsy pacing sometimes disrupts the experience of the movie. It exposes the writers' struggle to expand this wee little story to the desired nine hours. The back-to-back battles are a symptom. The round table between Gandalf, Galadriel, Saruman and Elrond is another; we get reacquainted with characters we grew to love in "LOTR," but the scene ultimately accomplishes nothing.

There are also things that are entirely Tolkien's fault. You have to wonder why the giant eagles that rescue the lot from the orcs dropped them off within eyeshot of their destination instead of throwing in a few extra wing-flaps. It's also not clear why the dwarves didn't just hire Gandalf to do the job, since he magics them out of every mess. (See the LOTR Project's hilarious "GandalfProblem-Solving" flowchart.)

"The Hobbit" feels unpolished compared to its "LOTR" precedent, but it's still good fun on familiar ground. The added back-stories give us a chance to hang out in Jackson's Middle-Earth a little longer. Me? I kinda like it there.

A note: Some might be wondering about the 3D and 48 frames per second. I have a lazy eye, so those effects are completely lost on me. I'm told by some that it's stupid good. I'm told by others that it's so real, it's distracting. I'm sure everyone's right.

Our Far-Flung Correspondent Olivia Colette lives in Montreal with the Husband Unit.