#OregonUnderAttack, "Unbranded" and the Wild West

I've put off writing about the wild horse documentary "Unbranded" that has captivated horse lovers, waiting for someone else to speak up. "Unbranded" has recently become available on Netflix, but it is the #OregonUnderAttack and the Ammon Bundy takeover of the Malheur National Wildlife headquarters that finally spurs me to write. "Unbranded" presents the problem as ranchers versus mustang supporters fighting over usage of federally-owned land, but the problem isn't that simple.

Likewise, the Citizens for Constitutional Freedom led by Ammon Bundy want to end the government "tyranny" over federal land management. For the Bundys, the issue seems to be cattle ranchers versus the federal government over unused land. Ammon's father, Cliven Bundy, remains defiant against the government demands to stop grazing on federal lands in Nevada and Cliven Bundy has refused to pay fees that other ranchers pay. Cliven Bundy doesn't appear in "Unbranded" but the issue of land management is prominent. According to "Unbranded," 60 percent of the mustangs roaming on federal lands are in Nevada.

"Unbranded" is a documentary about four young men (Ben Masters, Thomas Glover, Ben Thamer and Jonny Fitzsimons), who band together to train and then ride mustangs from the Mexican border to the Canadian border on federally owned land during 2010. Their leader, Ben Masters, has already used mustangs before in another wilderness expedition along the Continental Divide and had been impressed by their hardiness. They "out-perform our domestic horses in every way," he says. Mustangs are not a specific breed, but the word is a "folksy" term to cover the feral horses that roam North America. The Spanish conquistadors first introduced the modern horse to the Americas about 500 years ago. According to "Unbranded," cattle "ranchers claim the U.S. Bureau of Land Management (BLM) is allowing wild horses to cause irreversible damage to to the rangeland." Thamer currently works in the cattle industry.

The ranchers are allowed to use federal lands to graze their cattle and the federal government gets money, but the ranchers wouldn't do it if it wasn't cheap. In the documentary "Unbranded," it is pointed out that the cattle go home during the winter, but the wild horses do not. Livestock can be managed by the season of use and can be removed immediately. The cows go home for the winter. The horses do not. Desperate horses will eat sage that ends up being a twisted "literally make a crows nest in their intestines" in their stomachs and the horses die, starving to death with full stomachs.

If the horses have over-grazed the lands, then the ranchers are not allowed to let their cattle graze. Currently too many horses are on the federal lands in question and the horses taken off the lands often end up under BLM management and too many of them are unadopted. While "Unbranded" does aptly demonstrate how trainable and hardy some mustangs may be on this adventure. The documentary, the first feature-length film by the Montana-based director Phill Baribeau, reveals beautiful footage of horses against majestic views of the still wild areas of Arizona, Utah, Idaho, Wyoming and Montana, (cinematography by Baribeau and the Montana-based Korey Kaczmarek) yet it forgets to give voice to to the real wildlife.

If a choice should be made between the ranchers and the mustangs, the loser should be the ranchers, even without the questionable view of the Bundys and militia white terrorist groups like Citizens for Constitutional Freedom. When you think Nevada, you may think, Las Vegas and the surrounding areas are nothing but an empty desert, but deserts are far from empty. Deserts are fragile ecosystems and ranchers, in their determination to protect their cattle, ranchers have done away with most of the apex predators. 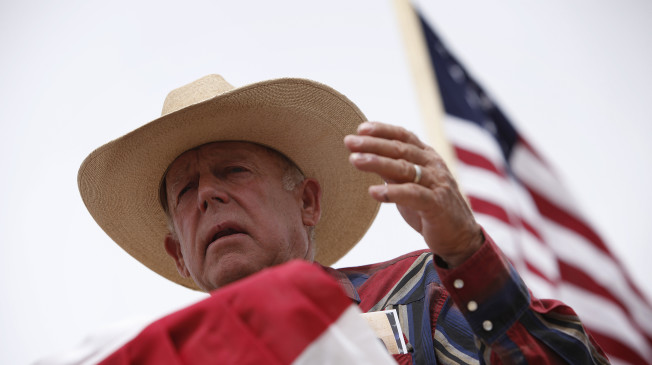 In Nevada, the 2014 Bundy standoff was part of a 20-year legal dispute between Cliven Bundy and the BLM over unpaid grazing fees, but it also involves the Oath Keepers, Praetorian Guard, White Mountain Militia and conservationists. Cliven Bundy declined to renew his permit in 1993. By 1998, the U.S. District Court prohibited him from grazing on what is now called the Bunkerville Allotment. In 2013, he was ordered not to trespass on to the BLM land in Gold Butte. In 2014, the federal agents chose to de-escalate the situation and Cliven Bundy, as of the end of 2015, continues to graze on the land without paying federal fees and without any attention to federal land management issues.

Gold Butte is a habitat of the desert tortoise and 77 other plant and animal species including bighorn sheep as well as fragile rock art. The Clark County Commission voted to support the Gold Butte National Conservation Area with Wilderness as did the Moapa Band of the Paiute Native Americans.

The Oregon Standoff began as a protest against the prosecution of two Harney County ranchers, Dwight Hammond Jr. and Steven Hammond, for allegedly setting fires on federal land. Ammon Bundy and his brother Ryan are both part of the planned takeover of the federal building. Ammon told OregonLive.com, "We're planning on staying here for years...This is not a decision we've made at the last-minute." The facility was chosen because it "has been the tool to do all the tyranny that has been placed upon the Hammonds." He further stated that "The best possible outcome is that the ranchers that have been kicked out of the area, then they will come back and reclaim their land, and the wildlife refuge will be shut down forever and the federal government will relinquish such control. What we're doing is not rebellious. What we're doing is in accordance with the Constitution, which is the supreme law of the land."

Cliven Bundy owes more than $1 million in grazing fees and court-ordered fines according to the New York Times. The Oregonian reported that as of late April in 2014, "45 cattlemen owned a collective $18,759" but with "just two ranchers leaving their bills unpaid 60 days or more." The monthly cost per animal unit is $1.35. The Bundys have grazed cattle on the lands that once belonged to Native Americans since the 1870s according to the New York Times. He stopped payment "after the bureau ordered him to restrict the periods when his herd roamed the 600,000-acre Gold Butte area as part of an effort to protect the endangered desert tortoise"(Gopherus agassizii) the New York Times states. The Nevada Cattlemen's Association does not support Bundy's methods.

At the time of the New York Times article, Ammon Bundy was 38 and a car fleet manager in Phoenix, AZ. It is likely that he is no longer managing a car fleet in Phoenix if he has indefinite plans to stay in Oregon. CNN reported that Ammon Bundy took out a $530,000 loan in 2010 for his truck maintenance company Valet Fleet Service.

In Nevada, besides animals like the gentle desert tortoise, there are mammals on the endangered species list, including the Sierra Nevada bighorn sheep which might compete for forage with the cattle and the wild horses as well as two mammals that might threaten cattle: the gray wolf (Canis lupus) and the wolverine (Gulo gulo). Wolverines are known to kill sheep and deer. There are also 15 plants on the endangered list.

In the time before horses and before the European invaded North America jaguars were found as far as Monterey, California. They are still found in some areas of the Southwest, but considered endangered. In other regions wolves were the apex predators.

In "Unbranded, " Ben Masters and his three friends bypass Nevada and instead travel through Arizona, Utah, Idaho, Wyoming and Montana. In Arizona, the Mexican wolf are being reintroduced and managed. The native scavenger, the California condor has been reintroduced. Jaguars care endangered and under conservation efforts. In all, there are 37 endangered animal species including the New Mexico meadow jumping mouse, the Sonoran Pronghorn (Antilocapra americana sonoriensis), the New Mexican ridge-nosed rattlesnake, the Desert tortoise and the Mexican wolf. In addition, 21 plants make the list.

Although Utah doesn't list the wolf as an endangered species, wolves roamed Utah until the 1930s according to one conservation group. Canada lynx and the Desert tortoise along with 25 plants are on the endangered species list. In Idaho, wolves are managed and mule deer and elk are controlled populations. Wyoming manages its Canada lynx, Gray wolf, Grizzly bear populations. Six plants are listed as endangered. In Montana, wolves, mountain lions and bears are under management programs.

The re-introduction of wolves to Yellowstone (which is in Wyoming, Montana and Idaho) had consequences, both direct and indirect, that astonished biologists. One wonders what the re-introduction of apex predators such as the grey wolf and the Mexican wolf would to to all the BLM lands. The wolves, mountain lions and jaguars might control the population of horses, but ranchers would protest the killing of livestock.

The Malheur National Wildlife Refuge was established by then-President Theodore Roosevelt. It is a preserve and breeding ground for native birds. The BLM has been adding land from ranchers around the refuge and made offers on the Hammond ranch. Other ranchers have sold out, but the Hammonds have not. The Hammonds have informed the local sheriff through their lawyer W. Alan Schroeder that neither Ammon Bundy nor his group speak for them.

Who are the Bundys speaking for? Free grazing and timber rights for all Americans at a time when most Americans live in the cities? The documentary "Unbranded," mentions the Taylor Grazing Act of 1934. The act was signed by another Roosevelt, FDR. It was enacted to "stop injury to the public grazing lands [excluding Alaska] by preventing overgrazing and soil deterioration; to provide for their orderly use, improvement, and development" and also "to stabilize the livestock industry dependent upon the public range." The Grazing Act was replaced by the Federal Land Policy & Management Act of 1976. Other management regulations changed in 1995.

Yet other things have changed considerably since the time of Theodore Roosevelt. The vast herds of buffalo no longer roam the Northwest. Conservation of species is considered politically correct, but too often in the U.S. the focus is on animals and plants in other countries and not our own. The word malheur means misfortune in French and that is what has befallen the wildlife of North America since the Europeans came to settle these lands. The #OregonUnderAttack issue is not just about land rights between the federal government and cattle ranchers. The issue of preserving wild horses is not just the value of the wild horses as a part of our Western heritage versus federal support of the cattle industry through grazing rights as "Unbranded" suggests. The maintenance of federal lands is also about the very real struggle for the survival of native animal and plant species. This week, Oregon may be under attack by militia but North American wildlife has been under attack for a long, long time.