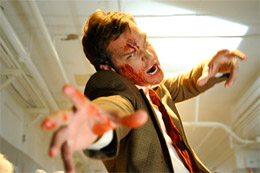 In its drift from one receptive viewer to the next, a cinematic motif or choice soundtrack selection bristles at the prospect of first exposure. Luis Bacalov's titular, Elvis-aping ballad for "Django Unchained" washed recently for the first time over many filmgoers' ears, and thus became their primary recollection. The same can and should not be said, however, about the western's mid-climax "duet" from 2Pac and James Brown later on, which aimed for adrenaline but landed on awkward bafflement instead. Call that disappointing instance decoupage or mash-up, but a post-modern cut-and-paste can also work wonders under the right framework: Two remarkable films from 2012 - Joseph Kahn's madcap teen genre "Detention" and Jacob Krupnick's feature-length music video "Girl Walk//All Day" - operate on the opposite assumption; that their usage of pop culture sources finds audiences second-hand, and in doing so ensure their unique re-appropriation attains an euphoric fusion overall.

Initially an altered context is all these two works share: "GW//AD" closely follows "The Girl" (Anne Marsen) as she silently dances across New York, or rather, lets the sample-heavy soundtrack by musician Greg Gillis aka Girl Talk dictate her every step and direction.

"Detention," meanwhile, is a collage of digression and subversion; it exuberantly attacks the very framework of teen genre films, and casts its young performers as self-aware archetypes frustrated that their "Breakfast Club" catharsis has yet to arrive. As much as one can describe Kahn's plot, it concerns tomboy outcast Riley Jones (Shanley Caswell) as she navigates her crush on caste-defying skater Clapton Davis (Josh Hutcherson), but finds her efforts blocked by the bandage-wrapped serial killer Cinderhella, a time-travelling bear, and a malevolent alien ship hovering above the warped student population of Grizzly Lake High. 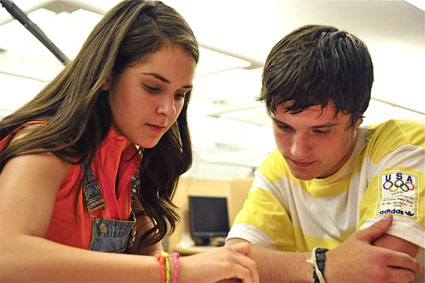 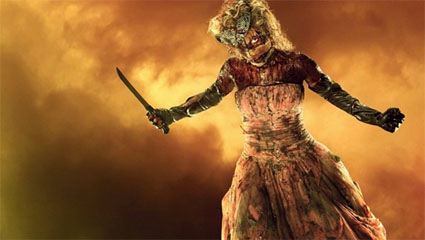 Just as novelist Rebecca West found James Joyce to have "invented [with 'Ulysses'] a form and exhausted its possibilities at the same time," her comments may find a new weight among first-time viewers of Kahn's feverish concoction. Your threshold for 90's references and narrative consistency may prove the best guiding light in this scenario, so addled is Kahn's Olympic-sprint deconstruction of genre tropes that it makes the recent "Cabin in the Woods" appear demure. That is of course the point, though: Kahn is commenting directly on the way current media is absorbed by society, and part of his film's thrill comes from how its characters define - and are defined - by pop culture's split-second attention span. "GW//AD" proves a peculiar counterpart then, as one wonders if the cadre of dancers depicted - Marsen, "The Gentleman," (Dai Omiya) and "The Creep" (John Doyle), both fighting for her love - are reacting to Girl Talk's "plunderphonic" use of Miley Cyrus, Electric Light Orchestra, and Waka Flacka Flame (to name just a microscopic portion), or simply acting as physical representations of its genre-swapping joy.

If there is an infectious - and oftentimes wearying - enthusiasm to Kahn and Krupnick's films, it can be traced back to their similarly dedicated backstories: "GW//AD" transitioned over the course of three years from Kickstarter project to reality - three main cast members, multiples locations, and a dance climax with 90+ extras - while "Detention" was funded almost entirely from Kahn's savings from his lucrative music video work. They both approach copyright law with the same amount of recklessness though, albeit for different reasons: "GW//AD" shields itself with the legal battles and loopholes for which Gillis is already well-known, whereas "Detention" proudly displays its dizzying selection of 90's and early-00's music (Hanson, C.C. Music Factory, Hole) - all the while knowing that Kahn is risking bankruptcy and crossed-off favors with every song used.

Their disobedience continues in terms of filmmaking style itself, drawing suspense and exhilaration through contrasted choices of presentation. In capturing Marsen's interactions with her two suitors and New York itself, Krupnick employs extended Steadicam shots through parades, Chinatown grocery stores, and parks to catch their stripped-down talents, and all clearly without pause for permits first. This point is made clear due to the near-constant looks from passers-by into the camera lens, their expressions reading a mix of embarrassment, surprise, and finally, a mere drop of temptation to join in. By actively clashing his character's unfettered gusto with the withdrawn NY public though, Krupnick illuminates a wonderful spiritual extraction: the sight of a jubilant Marsen next to a distracted pedestrian shows her mood can always be acquired. Naturally then, cynicism is clearly not paramount in Krupnick's universe, but it is choicely integrated where most effective; Marsen - clad in designer garb after a 5th Ave. fashion seduction - wanders into an Occupy protest, and predictably draws jeers from its demonstrators, and the financial struggles of street performers are touched on briefly as well. 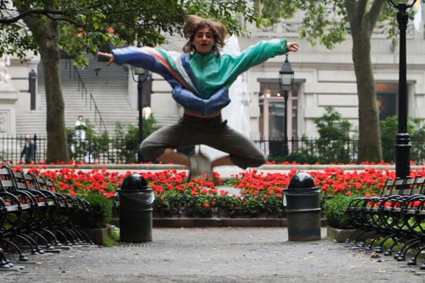 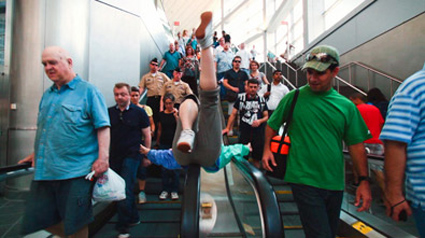 Kahn seems at first more than willing to compensate for Krupnick's lack of pessimism, as every character in "Detention" comes equipped with a righteous sneer. That expression boils down to desire: Riley is jealous of her best friend Ione (Spencer Locke) for attracting Clapton's attention, but Riley simultaneously ignores the nerdy Sander (Aaron David Johnston) in his own romantic yearning. There is also a cross-temporal, "Freaky Friday"-esque romance between Principal Verge (Dane Cook) and Ione's mother that is best left untouched. Those stifled feelings tap directly into the film's emotional core though, and especially in storylines where - for example - the resident school bully's (Parker Bagley) dark secret stems from Cronenbergian body horror, that center is in fact a blessing. It all adds up to Kahn's most prominent consistency, and marks through the mix of slapstick, snarky dialogue, and visual splendor a rather poignant take on high school violence, the isolation behind it, and the confusion just beyond. 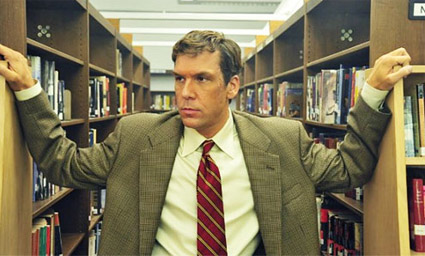 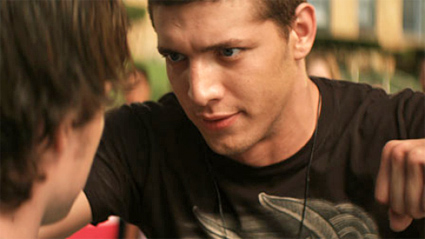 An emphasis should be also placed on Kahn's distinct visual rhythms, as he pursues a near-new media approach to filmmaking here that, while in any sane world should not be made recurrent, is an extraordinary example all the same. Utilizing subtitles, iPhone text conversations, and dense layers of movement, the film practices a form of comedic punctuation through cinematography, all in the pursuit of Lubitsch's type of spatial mastery. Along with director Edgar Wright and his increasingly complex action-comedies ("Hot Fuzz," "Scott Pilgrim vs. The World"), Kahn know intimately how the eye leads across the screen, and therefore can add a perfect exclamation onto a scene without stopping to explain why (a time-travel confrontation circa 1992 - where Riley alerts her deadbeat father to his dismal future - concludes with an impeccable smash-zoom and SFX sting). Again, the film's hyperkinetic aesthetic in unafraid of stranding the viewer - it will do so immediately and profusely - but if you fall in line with the measured rhythms on display (a reverse process to Nuri-Bilge Ceylan's work, if you will), an assured hand behind the caffeine-ravaged mayhem will start to shine through.

Thom Andersen's video essay "Los Angeles Plays Itself" and Christian Marclay's installation "The Clock" have pointed out brilliantly the way audiences perceive cinematic location and time, and in doing so brought a sharp reflection on just how much our lives are fashioned from it. "Detention" and "Girl Walk//All Day" seek to compress that consideration into slivers ("Detention" is 93 minutes, the latter even less), but succeed in cramming just as much information as celebrations of ecstasy and expanding knowledge. One of the most memorable scenes in "GW//AD" is also the only to feature subtitled dialogue, and it showcases Marsen - while affectionately provoking the public to dance with her -- following two Hasidic men down the street. They sheepishly glance at her and the camera, alert one another to their presence, and finally one asks Marsen why all the commotion. "Because I am happy," she explains. He laughs, leans in and says, "But you should always be happy," before walking off. A simple sentiment, yes, but one that both Kahn and Krupnick required a schizophrenic teen comedy and music video to make lovingly apparent.