Inceptions Made of Sand 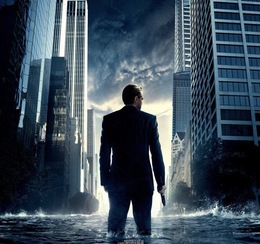 With the exception of "The Matrix" and the odd documentary, movies tend to pay only lip service an architect's job. Sam Baldwin in"Sleepless in Seattle" is an architect, but he might as well be a meat-packer. The movie is a romantic comedy with little room for anything but serendipity. It takes us to a couple of architectural landmarks, but not because Sam's profession compels him to.

So naturally, I was curious to know what the architectural community thought of "Inception," where the discipline is actually effectual. I was a bit disappointed to discover that while architectural journalists were entertained by the film, they didn't care much for its buildings. James Benedict Brown calls Ariadne "a dependable square," Aaron Betsky says her work is "banal," and David Neustein finds that Cobb and Mal's dream city is "hardly a honeymoon destination."

Honestly, they're not wrong. The architecture in the movie isn't spectacular. But "Inception" isn't about design; it's about the subconscious. Architecture is the force that stabilizes the wobbly and variable dream space. The settings might not make next year's Venice Biennale, but they still impact the characters and the audience in a significant way.

To flesh out my architectural vocabulary, I spoke with Montreal-based architects Brigitte Boudreau and Giovanna Andaluz, as well as the Canadian Centre for Architecture's senior web curator, Lev Bratishenko. All agree that architecture is meant to affect its beholders emotionally, if viscerally. Its purpose is to create a space where events not only occur, but where associations - whether provoked by our own personal baggage or external cultural references - are invariably made. "Good architecture is respectful of that and can even, in some way, prompt it, encourage it or discourage it," says Bratishenko. As such, Boudreau adds, "architecture is inextricably linked to our emotions and subconscious." From that perspective, Inception's subconscious architecture can be seen a vessel for reconciliation, a manifestation of the characters' experiences and concerns. 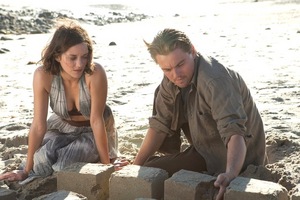 For Dominic Cobb, architecture categorizes the muddled mess of memory. He doesn't just store his recollections of Mal in a hotel; each moment is located in a visually distinct room because it is that room. Regardless of aesthetics, the building's function is to neatly compartmentalize the events of their doomed romance. "Managing spaces provides order, which gives us the impression that we're safe," says Andaluz. What Cobb dreams up isn't the perfect homestead, but it might be an ideal library.

It's also interesting how each set is large in scale. Bratishenko thinks that ties into "Inception's" genre. "Architecture is a space for action," he tells me. "Most of the scenes in the movie had something theatrical about them. It's very clear that you're in one room... But they were all rooms where you could move, and it's an action movie, so that makes sense." This is something we don't often think about when we watch action movies, but it's exactly the kind of thing production designer Guy Hendrix Dyas preoccupies himself with. Consider the last Indiana Jones movie and that ornate chamber in the Akator Temple, also by Dyas. You don't know what's going to happen in there, but the chamber is so spacious that it invites the notion that there's enough room for an end battle. Ditto for the Mirror Queen's mirror tower in "The Brothers Grimm," another Dyas design. 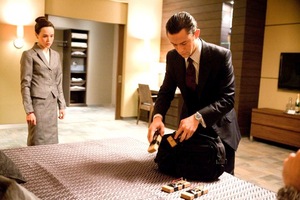 But "Inception's" environments don't exist merely to facilitate action. They mostly represent states of mind. Ariadne creates three dream levels for Robert Fischer. The concepts for these levels are driven by his psychological profile, Ariadne's maze-making skills, and the function each setting has to serve.

In the first level, Cobb and gang force Fischer to become wholly preoccupied with his father's dying words. Lke the Fischer family ties, the first dream level if bursting with clutter. The grey, downtown city scene is packed, full of traffic and criminal activity. The buildings practically obscure the sky, engulfing the action with no clear escape. The city is not unlike Los Angeles, which is where Fischer is headed, but he's not supposed to feel safe here, and the claustrophobic environment tells us that.

The smooth, systematic lines of the elegant hotel in level two replace the previous mish-mashed cityscape. Here, in this slightly more ambient setting with fewer henchmen, Cobb gains Fischer's trust. Boudreau insightfully remarks that the posh hotel also infers Fischer's social class since it looks like the kind of place someone of his moneyed background would frequent. Some have argued that it looks just like any old contemporary hotel, but the lack of chaos is essential to this level. It eliminates visual noise and allows Fischer to focus on what Cobb tells him. He's also more at ease here, which makes him more receptive. 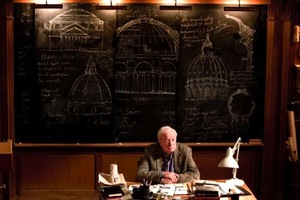 By level three, the mountainside stronghold is literally surrounded by blank space. This environment is completely simplified, stripped of almost anything. This also paves the way towards clarity and conclusion. There's only one place to go, which, incidentally, is how a labyrinth works. The white snow, coupled with Cobb and gang's ski suits, make Fischer's target all the more evident. Plus, as Boudreau points out, this is the only environment that lets Fischer be a hero, something he's struggled to become his whole life.

That "Inception" uses contemporary architecture has been a point of contention for the reviewers I mentioned, but Boudreau and Andaluz don't have a problem with it. Boudreau thinks it means Ariadne is moving forward, which, in essence, is what her environments are supposed to inspire Fischer (and to a lesser extent Cobb) to do. Had the film drawn on more ornate styles of past architecture, it might have distanced the audience. "Because we know the story takes place in the present," Andaluz says, "we can truly immerse ourselves in the story."

Cobb and Mal's dream city has also gotten some flak. One reviewer asks, "If you're stranded for eternity with your lover, with the limitless resources of your imagination to work with, why would you live in an empty modernist metropolis?" It's a fair question, but I'm more interested in the way the space works as a subconscious expression. The city originated from sand castles and evolved into those cloned Le Corbusier blocks. Over time, the buildings behave like prison bars or a multitude of citadel towers: they're utterly impenetrable. But isn't that a by-product of willingly choosing a fortress of solitude for 50 subconscious years? Real-life spaces are created and influenced by a variety of sources and references, both of which are constantly in flux. What happens when two people lock themselves up and stop engaging in the cultural flow of information? My guess is it would stunt their growth and their imaginary. Since they moulded their city from identical sand blocks, maybe their creativity was limited to begin with. We know that their intentions certainly were. 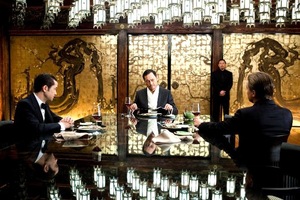 I'm sure many architects will argue that "Inception" could have been more innovative with its design, but I wonder if that wouldn't have been too distracting. In the end, there's a story that needs to be told, and characters who have things to work out. Even in my own dreams, the most important subject is me rather than the place I'm in. The place is the shape of my emotions; not the other way around.

Though the movie takes a big fictional leap by proposing such a level of lucid dreaming, it manages the dream spaces well. Thematically, the architecture is meant to help characters reach a specific conclusion, and they do. The buildings and urban plans are plausible in terms of what we know about the characters and their respective contexts, and all of the settings are reasonably relatable for the audience. These principles are important in real-life architecture. They probably also have something to do with why the movie works. 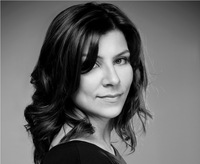 Olivia Collette is from Quebec but is living this year in Spain. She tweets as @olivia_collette and blogs at LivvyJams.