"Honey, I Shrunk the Iron Curtain!" 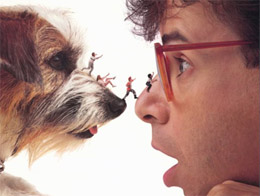 It may seem an odd choice for a personal classic, but you need to bear in mind under what circumstances this writer had first encountered Joe Johnston's less-than-pint-sized family adventure flick, "Honey, I Shrunk the Kids." The year was 1990, the Berlin Wall has just fallen, and the eight-year-old me was eager to lay his mitts onto any chunk of Hollywood fun that wandered into the emaciated landscape of post-Communist Poland. At the time, me and my friends would inhale anything that smacked of American affluence and unbridled pop energy. Most of us didn't own a pair of jeans, but we still craved movies showing people casually sipping Coke and having pizza slices when they pleased. (Hence the "Teenage Mutant Ninja Turtles" craze, among others.)

With "Honey, I Shrunk the Kids", our latent commodity fetishism could go on a rampage - as the eponymous kids got smaller, everything around them (lawnmowers, Lego pieces, cookies) grew larger. In a strange way, the film's main plot device mirrored our own way of looking at the imagined joys of consumer society, which seemed bigger, brighter and more exciting than the one we knew first-hand. To give you an idea of how different a world I'm talking: it wasn't uncommon for Polish people to collect empty soda cans and display them as a decorative trophy in their living rooms, and when I happened to receive a Milky Way bar from a German aunt, my dad advised me not to eat it in front of other kids, so as not to make them sad. 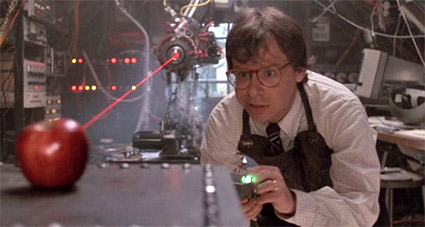 Johnston's movie tells the story of a nutty professor's chance scientific breakthrough, resulting in shrinking both his and his neighbor's kids into quarter-of-an-inch walking specks. When the father unwittingly throws the kids away with the garbage, they have to cross the (vastly expanded) backyard in order to get back home. Their dangerous trek includes a number of adventures, most of which don't wander too far off "The Incredible Shrinking Man" (1957) territory, with giant ants, bees and scorpions lurking form every corner to first give and then take a beating. 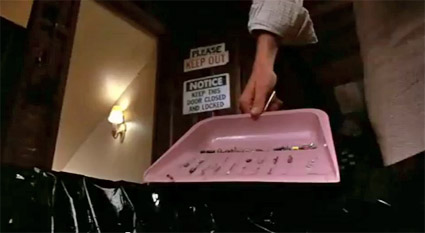 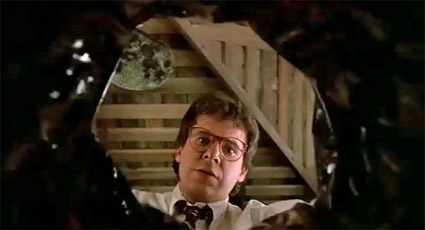 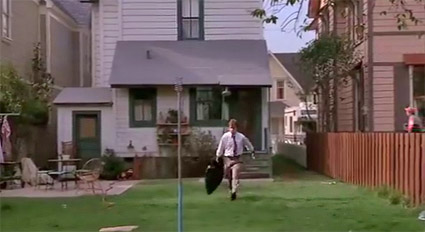 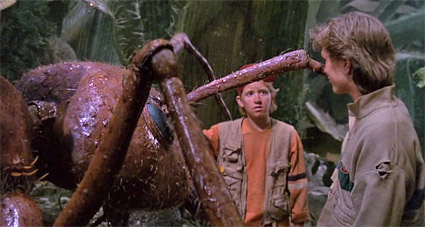 Deep down, it's a story of children craving their parents' attention, and it's no accident that the two most traumatic scenes include the father dumping his offspring in a trashcan, as well as almost slurping up his son with a spoonful of Cheerios. Rick Moranis, playing the dad with his signature mix of bug-eyed mania and childlike wonder, is cast perfectly: in a way, the kids seem more mature than him from the word go. It's not until he patches things up with his wife that the family can reunite - as well as bury the hatchet with the next door neighbors (who are having some familial issues all their own). 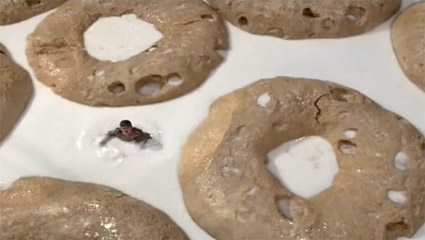 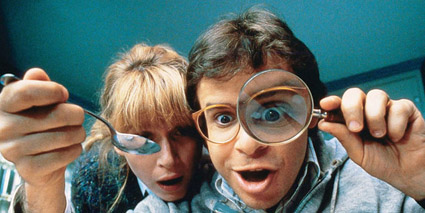 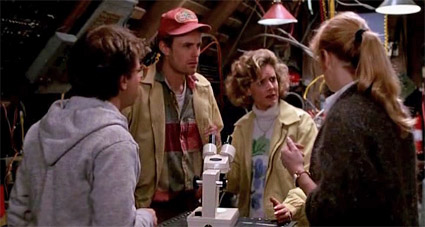 Watched today, the movie's special effects are touchingly quaint in their pre-CGI tactility. In a way, "Honey, I Shrunk the Kids" does what David Lynch's "Blue Velvet" did in its famous opening sequence: it plunges the audience head first into the dark and fecund world of a backyard lawn, where bugs are giants and the violent struggle for survival never ceases. And even though this is a Disney movie through and through (with all tensions neatly resolved, as well as all noble feelings duly reinforced), there's an unmistakable streak of sexual stuff brewing just beneath the surface - note the youngest kid ending up all covered in sticky yellow pollen, and declaring in the very last shot that he finally got the double entendre used earlier by the older kids. It's as much a story of shrinking as it is of growing up. 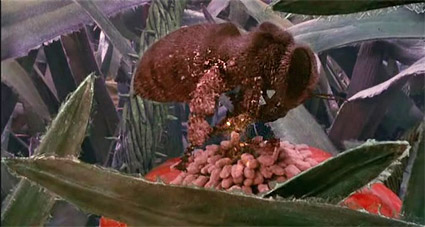 As for my erstwhile total identification with the movie when I watched it as a child, it certainly didn't hurt that the main family bore the Polish name of Szalinski (meaning, literally, "nutty") and that their wacky household was full of contraptions every underage nerd dreams of building, such as a paw-operated dog-cookie dispenser. And even though I couldn't sense it at the time, this was a distinctly post-Cold War adventure movie, with no hints at any kind of military danger and - in fact - featuring not a single villain.

In hindsight, I think it did for kids' movies what the Indiana Jones franchise did to action flicks - it brought them one inch (OK, one quarter of an inch) closer to becoming pinball machines of pure excitement and little sentiment. Not that I minded it at the time; I was too busy gasping for breath in front of my borrowed VCR, waiting for the movie to end only to press "rewind" and start the fun all over again.