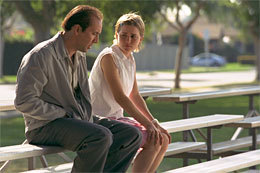 How long does it take for a good movie to convince you to watch it? Ridley Scott's "Matchstick Men," announced itself in the first scene, presented its product in the second, introduced paperwork in the third, and closed the deal in the fourth. The two hour long "Matchstick Men" sold in me less than seven minutes.

It stars a medicated Nicholas Cage, who manicures every inch of his life, but smokes enough to kill all those germs he fears. At work, he controls his environment, charming his unsuspecting clients. At home, he lives in a sanitized prison, guarded by a ceramic bulldog. In every other setting, he awkwardly squirms and squints. 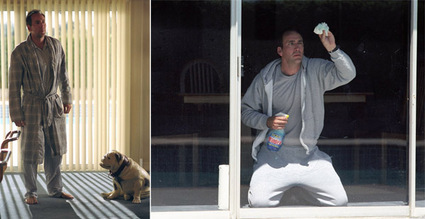 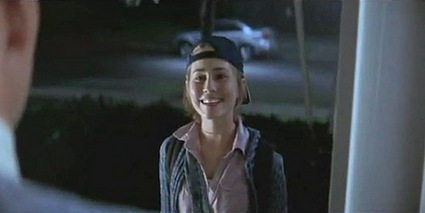 And, when introduced to his precious new daughter, he does what any new parent would do: he stares at her, listens to her, smells her, compulsively and obsessively. Every father discovers that as he learns how to be a father to a newborn, she has already reached her first birthday. And, as he finally learns how to be a father to a five year old, she has already turned six. But, this adorable new daughter - Alison Lohman - is a perky, boyish fourteen year old, who sometimes behaves more like a ten year old, as she steps off her skateboard and into his life. She is the daughter he always wondered about, but did not know he had. 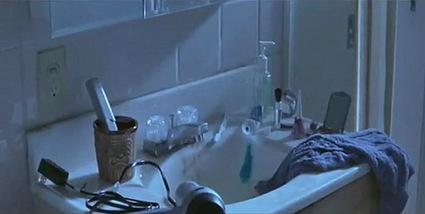 As we would expect, she quickly stakes her claim in his susceptible personal space, sending paralyzing jitters through his already crooked posture. As she explores his very private world, asking him questions he cannot answer, she manages to do something that no medication could: she cures his soul.

And this cure is long overdue, for he needs to be able to control his world, because Cage is a con artist who works with an unconcerned partner. Sam Rockwell is his sloppy protégé who we want to trust, but might not. He is an ostentatious convict who probably needs some deodorant. Rockwell toys with Cage's illnesses; maybe he provides the tough love that Cage needs, but we wonder if he is only brutishly mocking Cage's vulnerabilities. Essentially, Cage is a con artist, but Rockwell is a con man. 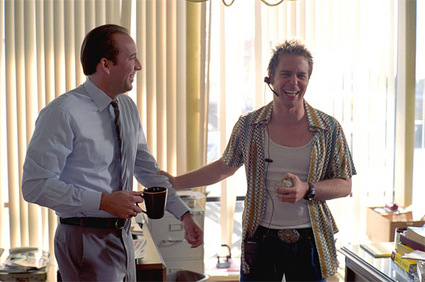 Rockwell seeks to make his way from Cage's professional life into his personal life, and Lohman now seeks to expand her presence into his professional life. Cage reluctantly, then eagerly begins to mentor her in a con. Nevertheless, he is still her father, and refuses to let her plunge into his lifestyle. But, he is thrilled watching her dupe her victim: she is the daughter he never imagined he would have.

But, Cage is already working on a much larger con. Cage and Rockwell are targeting a testosterone-infested investor whose scowl grows when he smiles. While Cage invests part of his time giggling with his daughter, venturing into germ-infested bowling alleys with the newfound confidence of an eagle, he spends other parts of his time hawkishly planning an elaborate swindle.

Part of the joy of such movies is that they are filled with tutorials on cons that seem like they might actually work. These crime films take us through all the steps of targeting, planning, and running scams, and because they are con films, we do not know if they are teaching us or distracting us. In the process, however, they seem to reveal some insights into human nature that make the lessons so much more enjoyable. And, when the plans get executed, we know that something will fail. And, the deeper joy of such movies is that - when the plans fail - they are always less about the grifts and more about the grifters. And, these deeper insights into human nature tend to make these films so much more powerful.

So, we can expect that Cage's life with Lohman will clash with his life with Rockwell. He is a bumbling father at the beginning of this career, but he is still an ace criminal not yet at the end of that career; one path must win. The choices he makes in the climax of the story are perhaps the choices we would all make in such a situation. And, we are as thoroughly invested in that father-daughter relationship as we would expect to be. But, as the movie unravels to its end, we might not expect the rapid succession of devastation, shock, surprise, joy and sighs that we experience along with Cage.

In the end, however, we realize that this movie is simply about a solitary man's remorse for the hurt he has caused people and his unexpected chance at redemption. And, at the end, when Lohman smiles at him, saying, "I'll see ya, Dad," and drives away, we take that time to figure out our feelings, but it is clear that he has finally understood and accepted his own.

Next Article: V for Vendetta: Guy Fawkes in Egypt Previous Article: Happiness is a good father