Greed is maybe good up to a point 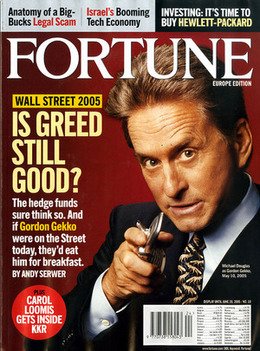 Sequels to Hollywood hit films usually take a couple of years to arrive, maybe up to three or five or even ten, but twenty-three? Why would Oliver Stone wait this long to bring us a follow-up to his 1987 "Wall Street"? On this opening weekend of "Wall Street: Money Never Sleeps," there doesn't seem to be that much of a mystery regarding the "why now?" The forces behind the collapse of Wall Street and most of the world's economies in 2008, and their nature, couldn't have passed unnoticed to somebody like Stone, whose name is synonymous with plots, conspiracies and the like.

The original "Wall Street" might be a product of the 1980s and it looks a dated in some ways, but if it proves anything to current audiences it's that there isn't much new under the sun. Like other aspects of life, the real Wall Street is ruled by cycles in which similar events seem to re-occur with time and may continue to do so again and again. Greed is not a novelty.

"Wall Street" tells the story of young Bud Fox who day in and day out dreams of meeting his idol, Wall Street player Gordon Gekko. When persistence and chance finally allow for this, he's disappointed to learn that his own outstanding abilities (at least that's what they are to him) will not be enough to do business with his hero or aspire to the possessions and trophies that he craves. Reluctantly, Bud accepts Gekko's offer to set himself aside from the herd of hard-working but irrelevant candidates for the job, by choosing to go after the truly valuable commodity Gekko craves: insider information. Once Bud reaches the top, he'll end up questioning the worthiness of it all but will only wake to Gekko's spell when "his mentor" takes advantage of his eagerness to save the airline where his father works in order to break it, and make a quick buck at the expense of the many who dedicated their whole lives to actually building the company and keeping it afloat.

Bud spends so much time obsessing with meeting Gekko that he doesn't dwell enough on the reasons why he actually should. Why look for a father figure when he truly has the best one in his very home?. The simple answer is: because real fathers will only speak the blunt truth to you, and in this case, Bud's won't be impressed that his son's only actual qualification for running an airline is the fact that he worked as a baggage handler there for a couple of summers. He is also well aware there has to be a catch to this. Bud thinks that once he sets himself for life, he will then become the first human being to ever be able to simultaneously serve two masters: God and money, good and evil and, in this case, Dad and Gekko. By the end of the film one feels he would have simply settled for learning the sad truth about the man he so admires. 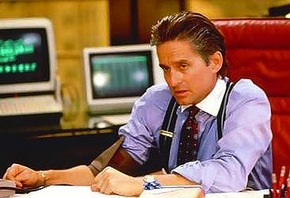 The question that comes to mind after seeing "Wall Street" is whether the nature of its corruption is the result of the type of people who aspire to work there, dreaming of hitting the jackpot, or whether it's the nature and rules of the business that corrupts those who enter. The answer is both of them, partially, and one of the best things about Stone's "Wall Street" is that it is able to convey this to the audience through the eyes of characters with mostly diverse motives; true, most of them have sold their souls in various degrees but there are exceptions, and the film is proof that even in the darkest of colors shades do exist, perhaps because some have seen what the dark side of money has done to others before. This is the case of Hal Holbrook's character, Lou, who tells Bud: "that's the problem with money. It makes you do things you don't want to do." Too bad the real Wall Street is ruled by the Gekkos, not by the Lous.

Greed would indeed be good if indeed it simply meant maximizing the stockholders investment, as Gekko's sells it in his classic speech. Instead, we realize this is not a world where hard work and ingenuity are not what's really rewarded but instead, where shortcuts are what the hungry people like Bud really look or, where companies are wrecked simply because they are wreckable. It is all about a perception that can be manipulated by those lucky ones. 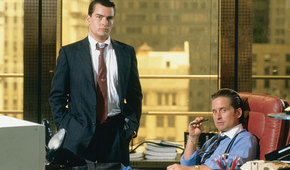 Before the film came out I would have never imagined Michael Douglas to have the necessary acting chops to turn Gordon Gekko into such a memorable, even legendary character. Up until then I mostly knew him from playing nice guys and heroes ("Coma," the "Romancing the Stone" movies) and victims of aggressive women ("Fatal Attraction"), the latter occupying a genre in which he went on to make other entries ("War of the Roses," "Disclosure," "Basic Instinct"). I must admit that every time I watch "Wall Street" and no matter how much of an absolute heartless bastard Gekko obviously is, I can't help but admire Douglas's the absolute mastery of his every action, his drive and commitment, even his deprecating sense of humor about everybody and everything. 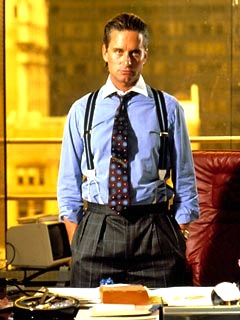 This is not a man whose feelings could ever be hurt. Some of his comments are so sharp, hold so much truth and sound so contemporary that they'll come like a "wake-up call" to viewers, no matter what their profession. He may be the world's least compassionate man but he usually tells it like it is, and doesn't hold in his emotions or thoughts (unless there's a chance they may serve him with a monetary purpose, which they often seem to). Some would remind us he set up a trap for Bud with his airline idea but throughout their business relationship one can almost sense Bujd almost asking to be deceived with his naivety. Gekko can even appear human once in awhile; just think of his conversation with the Darryl Hannah character when she mentions how she's actually falling for Bud. Here are two people who hold no secrets from each other. The film's one true friendship, as strange as it is. At any rate, Gordon Gekko may be loathsome human being, he may even be the devil himself (as the music on the trailer for the sequel suggests) but he's definitely a fantastic movie character.

"Wall Street" is neither a subtle movie nor has it subtle characters. Just like in "Platoon" you get the sense that Stone truly has the inside knowledge about the subject, its characters and their world. The financial dealings depicted onscreen aren't always simple to understand but this isn't important or even relevant because in the end, it is the characters themselves which the audience has no problem comprehending. Perhaps one of the things that kept it from becoming a classic was how much of a predictable, straightforward morality tale it is -- but really, what else could any movie about Wall Street really be? If anything, the presence of one classic insightful quote after another and the iconic nature of the Gekko character are enough for me to consider it at least a borderline classic film.