Doraemon Stand By Me: A Robot Cat without a Gong

Doraemon may have just hit the United States this summer by way of Disney on its family-friendly channel, but the earless blue robotic cat has been delighting children in Asia for several decades. “Doraemon Stand By Me,” the first 3D computer animated feature of this series was released in Japan in August 8, 2014 and will be released this December in Indonesia, Singapore and Thailand (November in Italy) but has no scheduled release date for the U.S.

“Doraemon Stand By Me” was one of the films shown at the Tokyo International Film Festival this year in October. The "Stand By Me" part of the title has nothing to do with the 1986 Rob Reiner coming of age movie or the 1960 Ben E. King song. 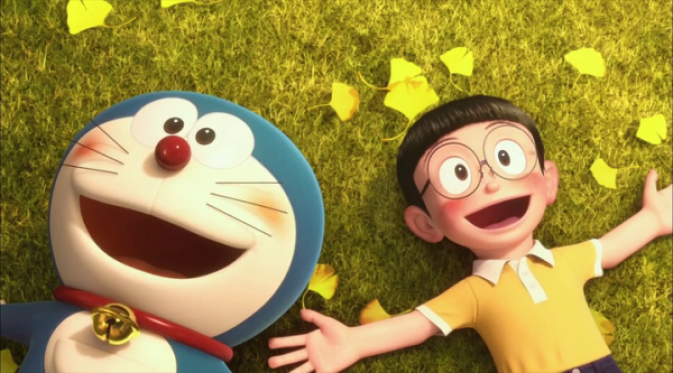 Although a cultural icon in Japan and most of Asia, having been declared Japan’s first anime ambassador in 2008 by the Foreign Ministry of Japan, Doraemon is relatively unknown in the U.S. That’s despite being named an Asian hero in Time Asia magazine in 2002.

Who is Doraemon? Filling the gap in time between Osamu Tezuka (Astroboy and my favorite, Kimba) and Hayao Miyazaki, Fujiko F. Fujio created a tale about a friendship between a robot cat from the future, Doraemon, and a boy named Nobita who is neither a scholar nor an athlete.

While Tezuka and Miyazaki were individuals, Fujio Fujiko is actually the nom de plume of a manga-writing team—Hiroshi Fujimoto and Motoo Abiko. Beginning their partnership in 1951, they adopted the name Fujio Fujiko in 1954. Heavily influenced by Tezuka, they created Doraemon in December 1969 and worked together until 1987 when they broke up to work on separate projects. Fujimoto died in 1996.

“Doraemon Stand By Me” is basically a reboot of the series: The origin tale with a few episodic segments. Doraemon has been sent back by Nobita’s great great grandson to help change the future for the better. All of you well versed in the time-space continuum might question how this is possible because the change might mean that his great grandson wouldn’t exist, but this isn’t “Back to the Future.” It’s a kid's cartoon and one well-loved in Japan. 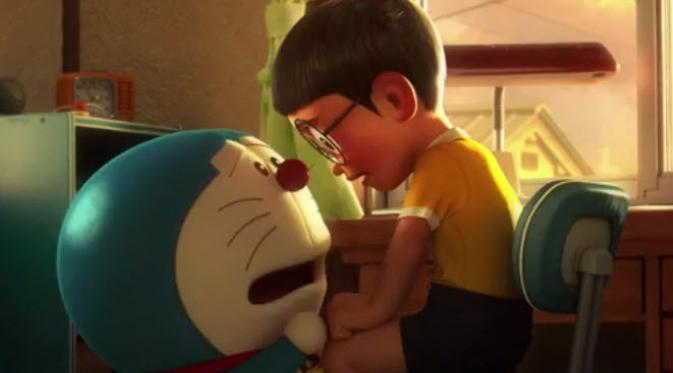 Specifically, the blue cat from the 22nd Century, Doraemon, is meant to prevent Nobita from marrying Jiako, the boisterous and big-boned sister of the boy who currently bullies Nobita at school, Takeshi, who is nicknamed Jian (from giant). If Nobita marries Jiako, the family will end up in financial ruin.

Doraemon may look like an earless rabbit to Americans, but he’s probably based on the native Japanese bobtail cat. That explains why his tail is a small ball. There is a reason he has no ears because, according to another story not told in this movie, they were eaten away by robotic mice.

His name is written half in katakana and half in hiragana which is unusual for one word. Dora is also used to refer to a stray cat as in doraneko, but it is also a homophone for the word gong. The Japanese have a confection called baked gongs or dorayaki that resemble two small pancakes with sweet bean paste in the middle. In the movie as in the manga series, Doraemon delights in eating gong cakes or dorayaki. The dora for stray cat and the dora for gong is lost in the English translation which calls the sweets yummy buns (I think they should have been called Adorabuns). 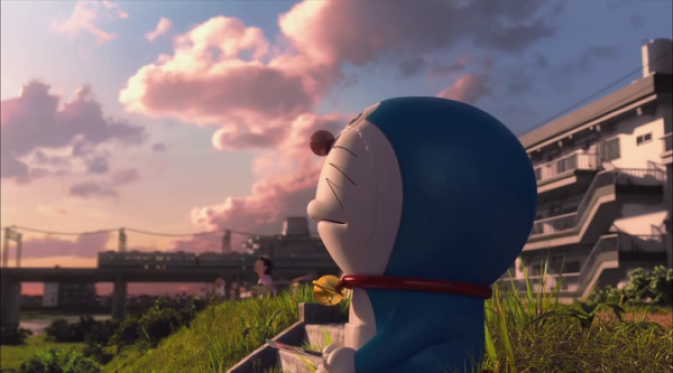 Nobita sounds like the perfect form of the noun nobiru which means to extend and suggests that this boy could have future possibilities (Ano hito wa mada nobiru あの人はまだのびる）and with his last name and first name put together, the phrase nobinobi forms (meaning freely). While Nobita needs to extend himself, his rival is called Dekisugi which is represented by three Chinese characters meaning “Going out cedar tree” （出木杉）but is a homophone for a noun phrase for someone who has the ability to do too much （出来過ぎ）. The character Dekisugi is the opposite of Nobita—Dekisugi is good at everything. and he’s kind and honest. He’s too talented and too good to be true.

Nobita and Dekisugi are both vying for the attention of Sue (in the English dubbed translation). Her original name is Shizuka, meaning serene fragrance (静香), and it’s a shame that the decision was made to use a more Western/European name. Two of my relatives have names based on Shizu and only one used the nickname “Sue.” Shizuka also means quiet, calm or tranquil in Japanese. It seems disingenuous that in the English translation, the names that are atypical were kept and yet a very typical Japanese female name was changed.

Will America welcome an average Japanese boy whose future is being re-shaped by a blue robot cat? Can the rest of the world be wrong? Japan has a soft spot for underachievers like Nobita who is not unlike another failed hero of another Japanese long-running movie series: Tora-san of “Otoko wa Tsurai yo” (男はつらいよ）. Tora means tiger, but Tora-san wasn’t ferocious. Between 1969 until 1995 (the year before the star Kiyoshi Atsumi died), Tora-san met a “Madonna” with whom he became infatuated with but ultimately didn’t win in 48 movies directed by Yōji Yamada (“Twilight Samurai”). That series wasn’t particularly popular in the U.S. but perhaps Doraemon will find an audience in the U.S.

Ironically, despite Doraemon’s fear of mice, a certain well-known and much beloved mouse has brought him in his 2D original form to the U.S.: The company that’s home to Mickey Mouse—Disney. While Disney has introduced Doraemon on its Disney XD, there has yet to be a date set for the release of “Doraemon Stand By Me.”