Like San Diego Comic-Con, D23 Expo is a place for people to dress up, and we are talking about formal wear and more. While most Comic-Cons have a few rules, Disney is determined to maintain a family-friendly atmosphere at D23 Expo.

San Diego Comic-Con maintains the right to alter costumes and inspects all "weapons." New York Comic-Con states that "Naked is not a costume. Please wear appropriate (or at least enough) clothing while attending NYCC." So blue body makeup to be Mystique from the X-Men isn't enough coverage.

When I attended Wonder-Con earlier this year, there was more than one attendee who came close to naked and one particular woman attracted all sorts of attention outside of the convention center. None of the costumes at D23 verged even on the Frederick's of Hollywood glam-trampy style.

You might recall a 2012 incident where the 15-year-old April Spielman and her boyfriend were ejected from Disney World for dressing as Tinker Bell and Peter Pan. Disney actually offered the couple clothes to change into but that still "ruined" Spielman's dreams. While Disneyland and Disney World do state "adult costumes or clothing that can be viewed as representative of an actual Disney character" are not allowed, at D23, that's another matter. This is the appropriate place for children and adults to dress Disney or Marvel or Star Wars. Of course, there are D23 rules.

The costumes at D23 were definitely family friendly. SDCC may be family-oriented to a certain degree, but there still are booth babes. The SDCC booth babes aren't as "skanky" as one can find at other Comic-Cons (as one attendee put it), but nevertheless their very presence reminds one that so much of SDCC is male-oriented. 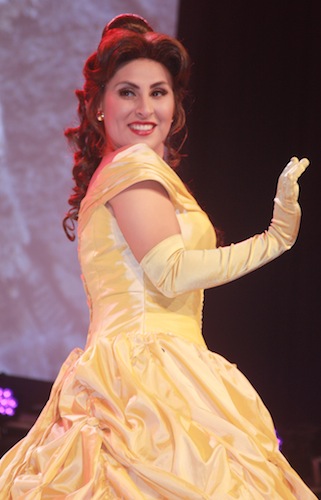 At D23, family-friendly and wholesome was the central theme. Some of the costumes were truly inspired and unfortunately not all of those creators heard about the first ever Disney fan costume contest: Heroes and Villains à la Mode. Sponsored by Party City, the contest was named for the infamous Edna Mode from "The Incredibles."

Entries closed on July 21, 2013 and the finalist were judged on five categories: Original design (or inspired by), Re-creations, Craftsmanship, Young Fan and Best in Show. Costume Designer Mona May ("Enchanted"), actor Jai Rodriguez ("Malibu Country"), and actress Devon Odessa ("My So-Called Life") served as judges while Jim Babcock added some campy comments as he played host at Stage 23.

The contest organizers whittled down the entries to a select 40, making sure that no character was repeated. Each contestant had the opportunity to pose in a silhouette behind a white screen before coming out, working the runway and then going over for inspection by the three judges. 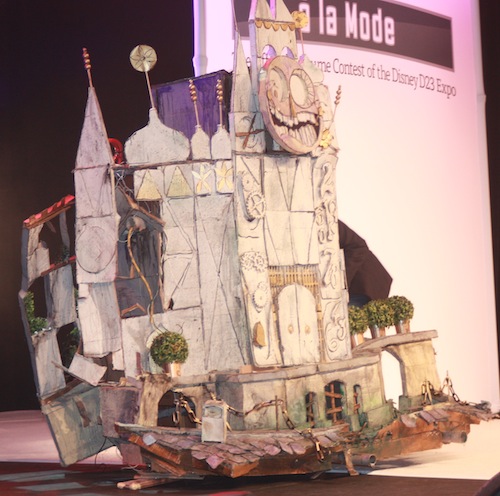 Someone in the audience suggested that music might have helped in the presentation portion although a few of the contestants had more than enough personality to overcome that problem. The woman dressed as Snow White was appropriately frustrated and shocked by Babcock's comments while the man who came as Jack Sparrow had the tipsy swagger that Johnny Depp made famous. Someone came as a Disneyland building.

Disney princesses were well represented with many hooped skirts. Two people dressed as different Haunted Mansion ghosts and the evil queen, Maleficent, was represented as well. The attention to detail and hand-applied decoration was inspiring. Not all the contestants used sewing techniques and hot-glue guns. The Iron Man was made from non-traditional materials.

For D23 Expo, the family-friendliness extended to the costume designing. A mother made a costume for her daughter. An uncle made a Buzz Lightyear costume for his nephew. Family and friends came together for exquisite gowns and even for one presentation that included three generations.

Three of the five winners based their characters on movies. While only five won bronze trophies, the contestants were all winners when they went out on the convention floor.

Cliff Secord/Rocketeer from the 1991 live action movie "The Rocketeer."

Merida from the 2012 animated feature "Brave"