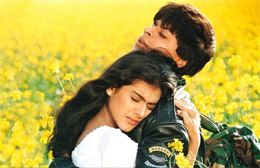 The movie starts out so beautifully. The great Indian actor Amrish Puri stands there with his dignity, dressed in a perfect mix of Western and native Indian attire, feeding a flock of pigeons in London's monochrome rain-soaked concrete Trafalgar Square, thinking fondly about the sunny, colorful, musical world he left behind in the bright green and yellow fields of his home country. Twenty years of life in England, he runs a generic convenience store, with the goals of giving his daughters the life he never had. In his daydreams, however, he is longingly feeding pigeons not here, but in India.

That very short moment provided a profound insight into the lives of a whole population of first generation immigrants. But, I'd say that the movie takes a nose dive from there, and it does temporarily, because Puri seems to spend the rest of the film with a frozen glare that is frightening enough to make Indiana Jones pull out his own heart. And, similarly, I just wish that that punk Raj (Shah Rukh Khan) would stop his giggling. This is Aditya Chopra's "Dilwale Dulhania Le Jayenge" (1995) and it is easily one of the most popular of all Bollywood films, at least for a certain demographic of women between the ages 15 and 45, in a way that "Sholay" is the most popular of all Bollywood films for whatever male demographic I belong to.

The first feature film directed by Chopra (son of Bollywood giant Yash Chopra), this film is unique for its era in that much of the film takes place in the West, across Europe, though it does not feel any need to explain why those Desi (South Asian) characters, apparently born and raised in London, have such thick Indian accents when speaking in English. The title translates as, "The Determined will take the Bride," but you will earn a lot of Desi street credibility if you call it by its more common name, "DDLJ." I'm trying to think of some movies that we identify by their initials; perhaps "LOTR."

It features all the requisite elements of a Bollywood movie: taboo love, colorful weddings, intense music signaling every moment of surprise and drama, then-rising-megastar Shah Rukh Khan enunciating each of his words with the force of a television news reporter, random moments of lip-syncing and dancing to enchanting tunes, natural and forced tears, slaps and punches across the face that are so forceful that their sound echoes all the way into Bangladesh, and dramatic fights that are so lazy that they earn their own internet video clips.

At the heart of the movie is Simran (played by the actress Kajol), Amrish Puri's loyal daughter. She finds out that he has arranged her to marry the son of his friend, back in India. She sadly agrees, on condition that she can take a train trip through Continental Europe to see the world (because the world does not exist, except in France, Germany and Switzerland, apparently). Meanwhile, Lamborghini-driving giggling dimwit, Raj (Shah Rukh Khan) is gifted by his father with a trip across that very same Europe on that very same train. We are surely thankful for this coincidence, because this film would have only been ninety minutes long, instead of three hours.

I make this point about length for another reason. If you can sit through the first ninety minutes, watching Raj flirt with her until she gets drunk and wakes up in his shirt, suddenly discovering she loves him, then the second half of the movie becomes very entertaining. I may feel this way because those first ninety minutes - and all that freaking giggling - beat me down into a stupor, but I believe that according some objective Bollywood standard, the second half of the film is really fun. Part of the fun is because Raj stops his annoying giggling, and turns on his charm. Strangely, in this same portion of the film, Simran is very somber. I think the deeper problem is that they seemed out of place - rather, contrived - in their trek across Europe, culminating in a ridiculous moment of prayer in a church. Shah Rukh Khan in Europe reminded me of those young punks in Chicago with feathered hair who would drive along Devon Avenue in their dad's rusty Toyotas, blasting their Bhangra music, hoping we would all appreciate how talented they are in being able to turn the volume knob.

After the European Vacation, the second half of the film launches when Simran quickly jets with the family to India to hesitatingly marry the man she never met. I would describe him to you, but all I remember is that he walks around with his buddies holding some really long rifles. Naturally, Raj travels across the globe with his ukulele to win her back. Because he is a man of honor, he does not intend to steal her, but to win her father's approval. Thankfully, we know that Desi weddings have a dozen different pre-nuptial rituals, so our stars have more time than they would in a Hollywood movie to reunite, and also to sing and dance their hearts out. In that time, the film takes a number of twists we would expect in a romantic comedy, as well as some exceptionally silly and entertaining twists we would not expect. And, all those characters that annoyed me in Europe suddenly, in India, became really charming and sympathetic. And as the endearing moments unfold, we can feel the racing Desi hearts of countless cranky, female business executives across America, as they dream of winning their own Shah Rukh Khan Bollywood Wedding, while settling for some stiff flavorless white guy.

Kajol and Shah Rukh Khan went on to star in some of the most popular Bollywood films of this generation, including "Kuch Kuch Hota Hai" (1998), and "Kabhi Khushi Kabhi Gham" (2001), and even the recent "My Name is Khan" (2010). In the process, these movies launched a huge resurgence of Bollywood popularity in the West, especially delivering itself to a whole new generation of young first and second generation immigrant Desis (who likewise embraced a techno Bhangra movement). These new films adopted American norms in tune and choreography and even editing techniques and camera movement. Too me, that period of the 1990s seemed as awkward as this movie's scenes in Europe, or its basic CGI credits, but that phase gave way to cultural, artistic, technical fusions that now seem completely organic and fresh. Likewise, the biggest of Bollywood films often challenge a lot of traditions. Here, an immigrant to London still holds tightly to his back home customs, his daughter tries to dutifully honor his wishes, while the boy tries to stick to those back home traditions though he deceitfully tries to win him over. Meaning, we are watching another Bollywood version of a Disney Princess movie, with the young princess feeling trapped by the traditional patriarchy, seeking freedom through discovering the world, but finally finding it through silent, but inappropriate love. The Little Mermaid. Beauty (of the Beast). Jasmine (friends with Aladdin). Pocahontas. Aurora (Sleeping Beauty). And here, Simran. 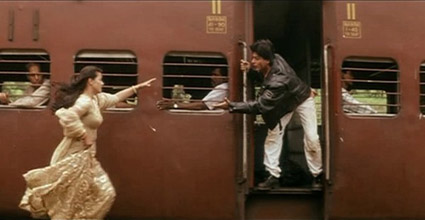 I make the jokes I make about Bollywood, not out of mockery, but because the movies so thoroughly enjoy their preposterous qualities. Consider that when Simran would break into song, the twenty-something Kajol would lip-sync the singing of the grand Lata Mangeshkar, age sixty-something. And, nobody would notice.

Further, Bollywood films, though getting increasingly risqué, tend to seek appeal across all age groups. So, Bollywood films might be able to avoid critique, but they have also corrupted the notions of romance among so many young people in a way that Hollywood and Valentine's Day marketing would be envious. Nevertheless, when they are fun, they are indeed fun. So, I wonder how many, of those young Desis who used DDLJ music as the soundtracks to their weddings are still married. It was the soundtrack to my wedding. Maybe now I should start driving up and down Devon Avenue in my Toyota.