The people behind San Diego Comic-Con, in partnership with Lionsgate, just introduced an online channel for its superfans: Comic-Con HQ, which is supposed to bring Comic-Con to fans all-year-round. In its December 7 Winter Series Showcase at the Paley Center for Media in Beverly Hills, there was something Supernatural afoot and while this new streaming service may be anchored by the fantastic force of a "Star Wars" warrior, any serenity is premature. The evening had three panel presentations: “Kings of Con,” “Con Man” and "Mark Hamill's Pop Culture Quest."

Two of the three programs presented, “Kings of the Con” and “Con Man,” center on fan favorites and a hyper-realization of their con experiences, while representing opposite ends of the fanbase spectrum.

“Supernatural” actors Richard Speight and Rob Benedict are behind “Kings of Con” which raised $100,000 in less than 48 hours on Indiegogo, ultimately reaching $279,905 by the end of its 30-day campaign. “Supernatural,” is the longest running American fantasy series, entering its 12th season in October of this year. The series follows brothers Dean Winchester (Jensen Ackles) and Sam Winchester (Jared Padalecki) as they travel around hunting down supernatural creatures. Richard Speight Jr. plays Archangel Gabriel who has been hiding out on earth in the guise of demigod The Trickster.

Rob Benedict plays the author of a “Supernatural” book series, Chuck Shurley. The books don’t sell well and he continues to write even after the book series ceases to be published. His inspiration is divine and, at first, he is seen as a prophet of God, but it later revealed to be God near the end of Season 11.

Speight and Benedict have been popular at cons, including SDCC and Supernatural Conventions, where Speight often acts as a convention host with Benedict as his sidekick. In 2013, Benedict was at a Supernatural convention in Toronto when he suffered a stroke, after which he took a year off for speech therapy.

The two are basing “Kings of Con” on their experiences and now the twosome have con panels on their convention-related series. Is that too meta? The “Kings of Con” web series might hold more potential for those who are fans of “Supernatural” because I’m sure there are plenty of in-jokes that I’m not getting. Speight commented that their “Kings of Con” characters are “caricaturized versions of ourselves” and that there’s “a nugget of truth in every episode.”

One instance is when Speight was calling Benedict whose room number was 911 and Speight called emergency instead. The cops came knocking at the door, but this situation had happened before. In the series, they take that real moment and make it funnier. The two hope with the backing of Comic-Con HQ to expand the cast. Benedict noted that Comic-Con HQ gives them a lot of creative control over the series that other networks might not allow. Benedict explained, “There's not a lot of shows that would allow a bearded women to put her bottom in Rob’s face and yet it needed to happen.” Yet Benedict assures one that “We’re not out to have shock-value humor.”

Comic-Con HQ series “Con Man” introduced Wray Nerely (Alan Tudyk) as a struggling actor who once played Cash Wayne in a now-cancelled science fiction series, “Spectrum.” His lack of success is sharply contrasted by the career of the actor who played the captain, Jack Moore (Nathan Fillion) who has gone on to become an A-list movie star. Nerely’s booking agent, Bobbie (Mindy Sterling) downgrades his flights and hotel for every convention so that she can pay him the difference and take her cut, but she also has sex with some of the convention guests. What’s fun are the cameos of geek fan favorites (e.g. Stephen Root from “King of the Hill” and Vik Sahay from “Chuck”) as well as the chemistry between Tudyk and Fillion.

Season two of “Con Man” has Jack replaced by one of the Hemsworth brothers and determined to make a “Spectrum” movie. Wray is more interested in getting a role on a TV procedural drama, “Doctor Cop Lawyer,” believing that this will take him out of the B-movie sci-fi acting swamp and into a more respectable mainstream shark tank. Convention regular Lou Ferrigno will be featured later in the season in a musical version of “Of Mice and Men.” 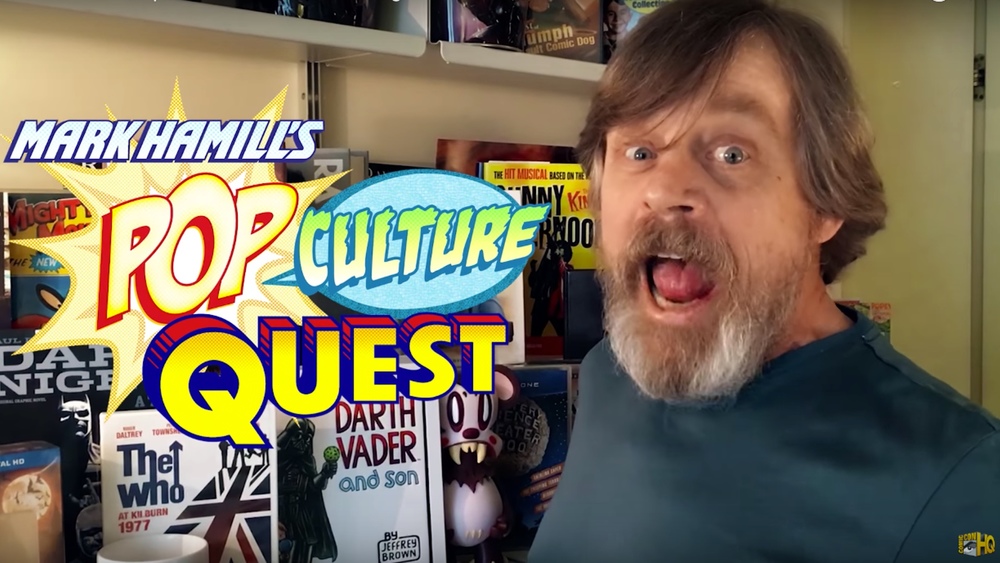 With "Mark Hamill's Pop Culture Quest," Mark Hamill and his puppet friend Pop are the smoothest act and the only one of the three series that is family-safe. Hamill is not only part of the "Star Wars" galaxy, but he’s also in the DC Comics family as the voice of the Joker. His role as the Joker comes in handy on the first episode, “Joker’s Favor,” as he and Pop visit the DC Headquarters in Los Angeles to meet with Jim Lee. At the end of the first episode, you’ll wish that you had Hamill’s voice on your voicemail.

On the second episode, Hamill talks with Scott Zilner who not only collects monsters and robots, including some very special Godzilla toys, he also hosts a special biannual fan convention called Mophicon in Burbank. The first episode and the second are both currently available on YouTube.

On his panel, Hamill joked that “Nobody’s more shocked than I” that he’s still “gainfully employed” in his profession. As a collector, he did have the foresight to ask for “one of everything” for “Star Wars” and once he was on a list, “the toys just kept coming.” He does have “the first prototype for the Wookie mask” that was more frightening than friendly and George Lucas gave it a no, but he added, “before you potential burglars start making plans, it’s not at my house.”

Hamill related how with the Internet and social media, nothing is secret any more, citing how his cameo on the program “The Flash” was already online “before I got back to the hotel that day.” From his perspective, “There are people out there who’s goal is to ruin everything.”

Hamill himself has ruined a few things inadvertently. When people make the rounds trick-or-treating in his neighborhood, he says, even though the kids might be dressed up 'Star Wars,' it’s “the parents that get excited.” “The kids are like six and have no concept of time. There’s nothing that dates us in the movies. It could be two weeks ago or years.” When the parents tell the kids that he’s Luke Skywalker, the children are horrified. Hamill laughed commenting that they must think, “This guy really let himself go … ”

While this all sounds fun, the original content is very male-centric, even the people that Mark Hamill is meeting with for the first six episodes. In the future, one hopes that Hamill will include some female collectors and the original content will explore the female experience at conventions. According to ComicsBeat.com, in a June 2014 Eventbrite survey, 55 percent of the convention goers were male and 45 percent female. The survey found that 65 percent of the people attended to make new friends, 55 percent to bring friends and family. Of course, then there’s the collector’s side: 70 percent go to buy new stuff. Among the younger con attendees, it’s an even split between male and female.

In 2015, the Washington Post reported that 2015 Comic-Con was an equal split, 49 percent male and 49 percent female and 2 percent other. Forbes looked at six of the largest anime conventions and found that the attendance was almost 50-50.

As charming and interesting as Mark Hamill is in person and on his show, and as much fun as backstage shenanigans of Con stars are, there’s still another side of conventions that is being ignored, at least on the Winter Showcase.