Beautiful people staring at each other 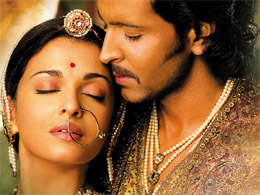 This Indian film is an unabashed epic that targets that greatest of all Indian epics, K. Asif's 1960 film, "Mughal-e-Azam" ("The Greatest of Mughals"). It is a prequel of sorts: "Jodhaa Akbar" tells us the story of the Mughal Emperor Akbar and his wife Jodhaa; "Mughal-e-Azam" is about their son, Jehangir. Like any other man of withering virility and receded hairline, I like beautiful things and beautiful people, and "Jodhaa Akbar" is loaded with carved reddish palaces, golden decorations, and silk scarves of every color. And beautiful people.

Hrithik Roshan is the 16th Century Emperor, raised on the battlefield. Having witnessed too much bloodshed, he dedicates his throne (or, in this case, pillow) to making a kinder, gentler Empire. He focuses on forgiveness and religious inclusion, seeking peaceful resolution over slaughter. Through the course of the film, he learns how to be an Emperor for the people, making a few serious mistakes in the process. He ignites rebellion from his immediate family, yet in consolidating Indian power, he captures the loyalties of distant governors. 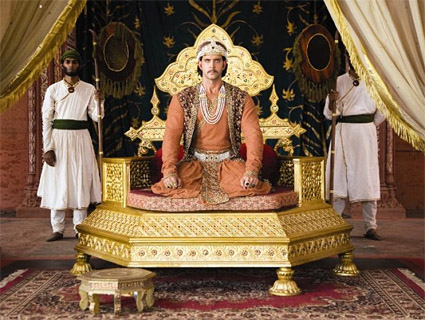 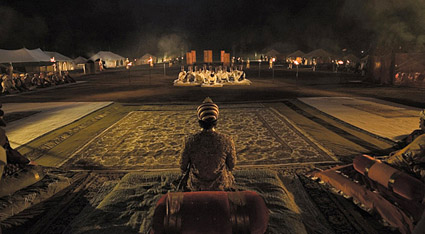 Acquiring the support of the Rajputs, he is given their princess in marriage. Aishwarya Rai Bachchan is Jodhaa, that loyal, confident, dignified Rajput daughter. Pious, brilliant, and master sword fighter. She is the daughter every father - or at least this father - hopes to nurture. Though her story might seem somewhat modern, her breaks with Mughal tradition lead her to go where queens must not: the kitchen. Shocking some, offending others, she cooks for her husband. 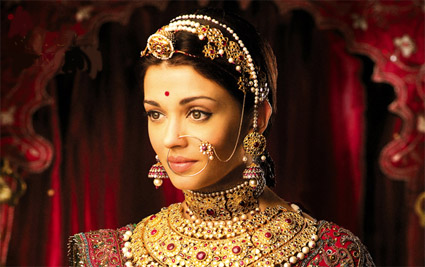 Together, the two develop a tender, modest, sensuously platonic intimacy that would make Howard Stern punch a hole in cement. They smile. They seek. They blush. They blossom. Do relationships like this ever really happen? Gosh, I hope so. 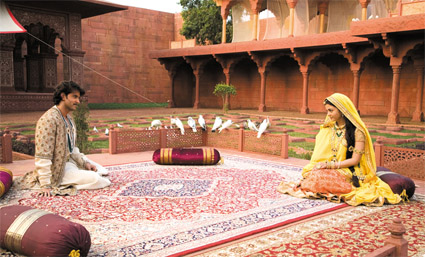 I am glad that the Mughals are getting a sympathetic treatment. With India's own rise of Rightwing Nationalism in the 1990s, the Mughal centuries were getting removed from the history books. Here, Ashutosh Gowariker illustrates his love for India as much as he does in his preceding films, the Oscar-Nominated, "Lagaan: Once Upon a Time in India," (2001) and the gentle, "Swades" (2004). And, that love includes the Mughals with all their exquisite royal splendor. 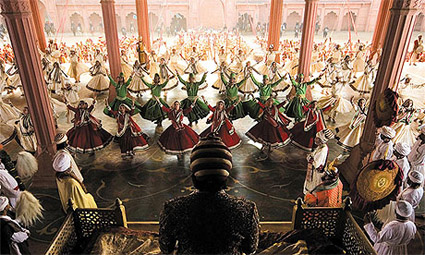 But, I have plenty of complaints about this film. This film is a well-intentioned three hour public service announcement, calling for religious tolerance but has little to offer the actual conversation. More than that, it is blatantly uneven in its commentary. When she prays, her prayers are answered immediately and miraculously. When he prays, his prayers seem to get sometimes answered, through her advice. If we are going to make Divinity a character in a film about religious equality, then the God-character would answer everyone's prayers equally, no? The problem would be the same if the God-character answered his prayers more than hers. Making God a character is already a huge risk.

Moreover, this film is a revisionist history, which claims historical accuracy. It keeps its story so focused on one specific thread that the other troublesome elements are easily ignored. Here, we watch the romance between a Muslim Mughal Emperor and his Hindu Rajput wife; a marriage that might equally offend both Muslims and Rajputs -- enough that that film did not screen in many regions in India. Nevertheless, such material makes for the taboo love stories that Bollywood films demand. Of course, kings are rarely monogamous: we ignore the Emperor's thirty-some other marriages, but they might be saved for sequels. 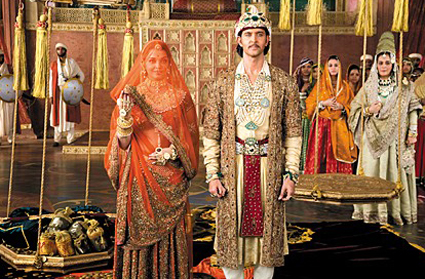 It also suffers from the usual Bollywood problems. The action sequences - featuring casts of thousands - are tedious, clunky and unconvincing. The long, long takes made me thirsty for cuts. Indian cinema has mastered dance choreography (and editing), but is far from similar expertise in action choreography. The sword fights and individual melees not only lack athletic and artistic choreography, they lack narrative structure with rising action. Meaning, if we cut those sequences in half, we would not miss anything.

Further, if you have been to a South Asian wedding, you know what I mean when I complain about Bollywood's influence; make a donation to the bride's father because he is giving up a Lexus or two to pay for the wedding. To be fair, however, Hollywood has already convinced us that a glittery vampire with nasty teeth can compete with a shirtless werewolf with bright white incisors for the love of a sleepy-eyed stoic high schooler. 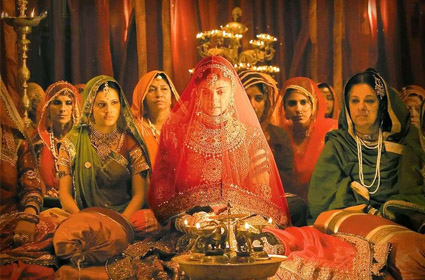 I know how Bollywood's celebration of light-colored skin affects the self-images of young men and women. Bollywood is often more subversively White supremacist than anything that comes from the West, and more so now than before. In recent years, European physical features have seeped in, but the love of milky whiteness is an old problem. Our stars in this film perpetuate that nasty tradition. 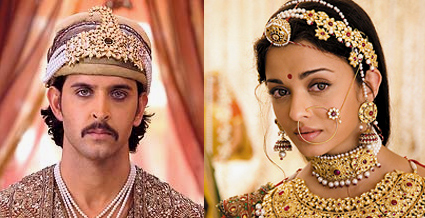 So, this film annoys me in a whole list of ways. But, I do not care. I had a comparable experience with "Lawrence of Arabia," where the film bothered me on similar levels, but it was still so darn majestic that I remained glued to the screen. The difference here is that "Jodhaa Akbar" is packed with eye candy in the foreground, background, and everywhere else. The acting, even when still, is inviting. And, A. R. Rahman provides the soundtrack, at times grand, at times soft. He churns out masterpieces again and again like raindrops. 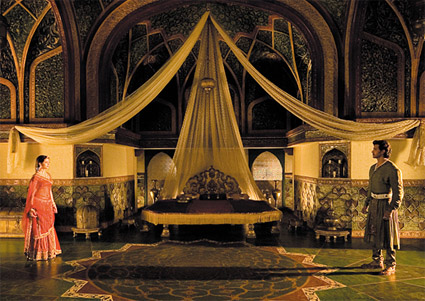 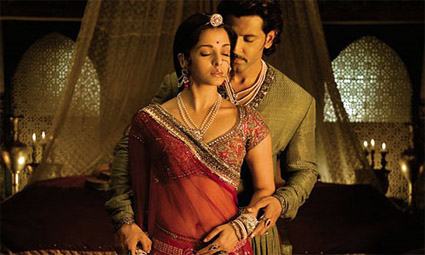 In any case, these are people that are so photogenic, that they mesmerize me. Most of the frames in this movie consciously draw attention to themselves, mimicking Mughal paintings, and that is just fine. At the center of this artwork are megastars, Roshan and Rai Bachchan. They have appeared together previously, but no film so voluptuous as this one. For all I know, he might look like a giraffe in real life, and she might look like a hairy elephant, but the camera loves few on-screen couples like it loves them. If I met her in person, I would probably lower my gaze. Until then, however, I am just going to smile and sigh.