A letter from the barricades in Cairo 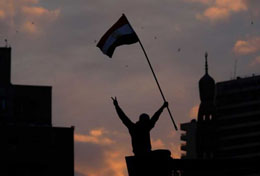 Wael is a gifted young film critic who joined his fellow Far-Flung Correspondents at Ebertfest 2010. Today the group received this word from him after a week of silence.

We took a specific safe route to my grandfather's house on Thursday night. After a good night sleep, I met up with fellow friends and protestors of Zamalek and walked to Tahrir Square where the majority of the protestors chanted and waved their hands in unity. The Friday protest was exhausting for we were struggling to stand our ground. The police fired tear-gas and it was the first time for me to inhale this toxic material.

I don't know if any of you have experienced the effect of tear gas. It is unbearable. Besides the obvious name it is given (because it causes eyes burning, severe tears and temporary limited sight) once I inhaled it my nose kept running non-stop. I experienced difficulty in swallowing; my throat was itching and my lungs burning. The crowds cleared and ran as the shooting of tear gas intensified. 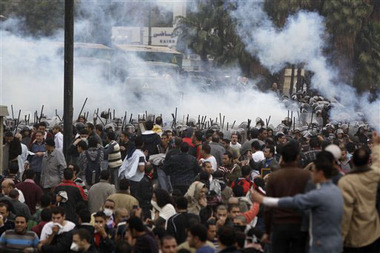 Once we reached somewhat clear air. We chanted, "we can fight this." It was a matter of retaliating. The routine of running away and back to the police was constant and more organized than the initial chaos of people rushing and stumbling over each other while not being able to see anything. We waited, saw the cans being fired in the air, saw the cans land among us and finally picked them up and threw them back. The police were too far away so we couldn't actually reach them. The key was to get a little bit closer every time. Eventually a day later this happened and they withdrew. 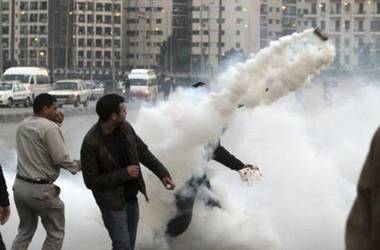 I know you all know this from the news, but I'll say it anyway. Mubarak went on television the day after and asked the government to resign on Saturday. However, he still didn't indicate that he would leave which is what this movement was all about. I think this is what ultimately triggered his downfall. He thought people would be satisfied by his orders, but what we thought was...it's working. If we could get rid of the government in one day, it wouldn't take much longer demonstrations for the big guy to step down.

It is still unclear what exactly happened in the events that followed, but rumor has it that one of the ministers responsible for the security of the nation didn't react well to Mubarak asking him to resign and ordered the police to leave and opened the doors to dozens of prisons so that more than 2000 prisoners could leave. Others say Mubarak was responsible because the minister couldn't have ordered anything once resigned. Either way, prisoners escaped, thugs went into empty police stations and stole all the weapons.

That's when real fear spread around the nation. We didn't fear the government or Mubarak but our own people. The triggering of this event brought out the best and worst of Egyptians. The looters started breaking into homes, raping girls (one of them the daughter of a friend of mine), stealing whatever they could and threatening citizens with the guns they stole. The sound of gunfire echoed all over the city. 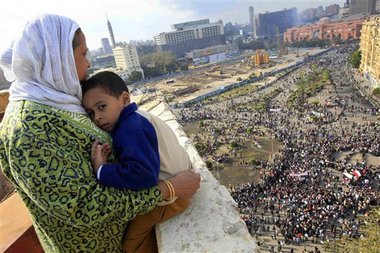 The malls I went to on a weekly basis are now history. All that is left of them is rubble, broken windows and emptied drawers. So many areas of the city of Cairo were transformed into ruins and debris. The real wreckage hit everyone when we found out the Egyptian museum was attacked and the looters ripped off the heads of mummies and damaged other artifacts. That's when everyone realized that the police had fled and we were the only ones left to protect the country, its history and our homes. 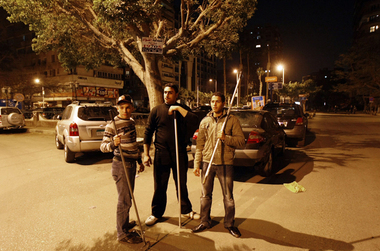 The best of men walked out at night with baseball bats, swords, sticks and other weapons to protect the streets and homes of so many. Me and my friends and a bunch of other people protected Zamalek till dawn. At around seven when the sun came up we would go back home sleep a few hours, wake up, demonstrate, go home, eat, sleep an hour or two and patrol the area at night to fend off looters. So far my group has been responsible for the capturing of 7 looters and 3 escaped convicts.

The convicts confirmed to us that they were indeed forced to leave their prisons or get shot. All they wanted was food and to surrender themselves. We handed them to the army. Whenever we would hear screaming or a shouting or gunfire we would rush to see what happened. Zamalek is an island so it's well protected with only a few bridge entrances. However, it is also any criminal or thieves' main target for it is where the rich people live. We blocked off the entrances with all kinds of blocks, fridges and what have you. A day later they found another way in, through the Nile on little boats. When I spotted two guys crossing the Nile into Zamalek, I shouted and the crowds gathered. We caught them and asked them what they were doing at four o'clock in the morning. "Fishing" was their answer. They didn't have any fishing gear, only one machine gun and three pistols. 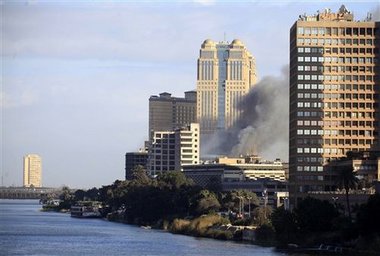 By now the whole town of Zamalek knew each other. We had special passwords "chicken" "courage" "Thank Goodness" that we would ask whenever someone passed by the road blocks we set up on every street. Two foreigners came by too. They were reporters, one was Swiss and worked for Time magazine and the other was British and worked for the Wall Street Journal in the UK. The latter took pictures of the road blocks and sent in food, blankets and tea late at night as a thank you for protecting where his apartment among others.

He asked if he could take pictures of me holding my bat "to show the world your kind service in the absence of police" and I didn't decline. He said the pictures would appear on their website online only. Besides throwing back two tear gas cans to the cops, I did not get involved in any violence whatsoever. I even stopped the guys from beating up one of the looters and they listened and just handed them to the army. I also stopped some of the protesters from throwing the tear gas cans into the river because of the pollution in water and all.

This routine of patrolling, demonstrating, resting, and resting went on every day. Till finally the million march forced Mubarak to step down and announce that he wouldn't run for president later this year. I have to say this satisfied me and realistically speaking, I don't think the country is in any condition to be handed in to someone else in a day or two. The shift has to be smooth and gradual yet not too long. So to be honest, think his speech was satisfying and fair (expect for the parts where he said that he always stood for protecting the country, instead of saying the people, which is what matters). 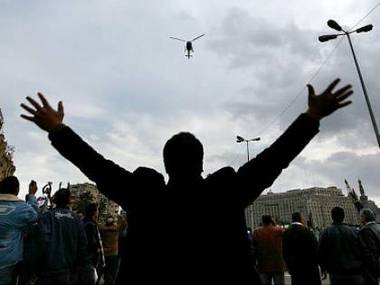 Either way, with fighter jets and helicopters hovering above us, hectic days later we finally made it. A lot has changed in the past few days. I no longer want Nobel Prize winner El Baradei to be president because of his speeches and the way he handled and addressed the situation. I'm not sure who I want at the moment, but the only good thing Mubarak did was announce Omar Suleiman as Vice President. My grandfather speaks highly of him and thinks he more than anyone can bring stability to the region, manage extremist groups, and be responsive to the people's demands. Still, I will have to wait and see who wants to run for president before supporting anyone.

The protests in Tahrir continued after the presidential speech. They wanted him to leave instantly, which is very unrealistic and would lead to chaos, so I left and spend the night at home. Today the internet is back but things got a lot worse. Pro Mubarak protesters appeared out of nowhere and are attacking the originally "peaceful" protesters in Tahrir Square. This happened everywhere and at the same time. They rode horses and camels and marched in. Some of them are reported to have badges and be police officers in disguise (hmmm...Mubarak trying to free the streets and show that he's not completely hated?).

Either way I decided not to fight with my own people. It is getting out of hand and our demands were answered. I won't take part in what could lead to a civil war if any armed extremists got involved. From today I on, I'll continue protecting my grandfather's house from looters, I'll stay up all night making sure all the streets are safe, and I'll play the waiting game. I go up and check the news every once in a while and to get an occasional bite. However, phone calls keep coming in and false alarms keep luring me back to the streets. This email was rushed, so I apologize for all the errors. I will contact some of you individually tomorrow. Right now, I'll go back down to the streets. Feel free to ask any questions but don't expect instant replies because of the internet cutting out every once in a while and my absence from home. Thanks for asking about my well being and all the support.