A brave film about a fake miracle 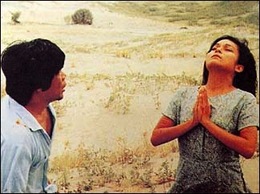 Regardless of how one feels about the Vatican and its handling of its recent crises, one cannot help but doubt how much we feel let down. Religion of any sort has long been regarded as our moral authority. Some today will think it is outdated, others still necessary.

Everyone should be able to believe want they want to, but there is no doubt that when it comes to belief, there is nothing quite as dangerous as blind faith.

If there was ever a film about the evils of blind faith, it is Ishmael Bernal's Filipino film HIMALA (meaning "miracle" in Tagalog). And among films involving religion, it is unique in its brave stand against it, long before the last 25 years or so, where it has become fashionable enough to do so.

The film is set in a provincial town, beset by poverty, disease, and harsh climate. Elsa (Nora Aunor), one of its residents, claims to have seen the Blessed Virgin Mary atop a barren hill at the town's outskirts. Soon she is associated with healing the sick. Several visitors become dozens, dozens become hundreds, and before you can say hallelujah, she becomes a news sensation.

Good publicity brings good business. Her fame even brings tourists. Orly (Spanky Manikan), an out-of-town filmmaker, comes to film Elsa's exploits, more skeptical than curious. Another significant arrival is Nimia (Gigi Dueñas), Elsa's close childhood friend, who has returned from the big city (Manila) where she fled prostitution. With the number of people visiting the town, she puts up a cabaret, which surely serves more than song and dance.

Then something befalls Elsa and her confidante Chayong (Laura Centeno) which portends the end of their good fortune. It is followed by a cholera outbreak which Elsa cannot heal. The deaths that result elicit the town's blame. Tourists stop coming, a wealthy patron is murdered, a cherished friend commits suicide. Elsa blames herself for everything. And that's not the end of it.

Many essays that have cited the film note Elsa's healings, but is there really anyone in the film who is directly healed as a result of her? We are told of her miracles, we see her devotees, we even see her go through the motions. But there is not one scene where an ailment disappears, where a suffering is lifted, or where thanks is given. It cannot be coincidental. Bernal emphasizes that seeing is believing, at least to himself. 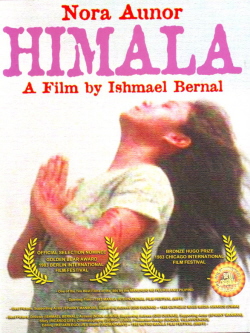 The film likes to focus at the seemingly illogical decisions impoverished people make for the sake of being devout. The town is almost desperately poor. Makeshift hostels are put up to cater for foreigners and their indiscretions, but personal fortunes are sacrificed to stay holy. Nimia gets criticized for putting up what is essentially a strip joint, but in a desolate area where nothing seems to grow, it puts food on the table for those who work there.

Though the film may seem against religion, it doesn't take pot shots at the Church. Remarkably, one of the film's most sane characters is the town's priest (Joel Lamangan who is today a successful Filipino director), who is also skeptical of Elsa's gifts. Whatever his reasons are for doing so, the words he imparts to his flock are restrained and thoughtful.

Nora Aunor is an actress of legendary proportions in the Philippines, whose reputation was most likely canonized by this film. Though she can act with the best of them, what draws Philippines audiences to her is her commonality. She truly looks like an ordinary Filipina, but her acting instincts are at par with the best in knowing how to draw mass sympathy. Here she is, as Filipino film critic Noel Vera best puts it, Bernal's "enigma," dousing any suspicions or presumptions we have of her. Whatever Elma's reasons are, they remain her own, right down to the end. 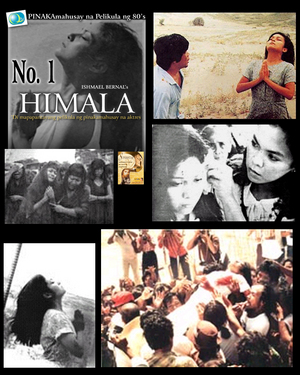 The film is has many weaknesses. For Filipinos, the dialogue though smartly written is far from genuine. With characters always speaking sequentially, at times it feels like a radio drama play. (but compared to mainstream Philippine cinema, it will feel like a breath of fresh air). Apart from Nora Aunor, the acting is almost completely restrained, with hardly any emotional exclamations of any kind, until the end that is (perhaps it is meant that way to serve a genuine horror at the film's climax). Several events serve no genuine purpose than plot points (Why did Elsa do what she did at the beginning? Why did Orly not act? How could the outrage at Elsa towards the end happen so quickly?), and the explanations behind them, if any, are unbelievable.

Yet these failings fail to derail Ishmael Bernal's mission, which is to show how we disgrace ourselves once we fail to question our most cherished beliefs. We are shown people sacrificing their livelihood, families, and futures, all for the belief that God will help those who do not help themselves. We hear about this in industrialized nations such as the US, but it happens all too often in third world countries as well. And the films mass gatherings, especially in the film's final sequence, are more horrifying than any mass zombie attack. The desperate hope these people display hold a mesmerizing power of hopelessness.

The Philippines is a country where the Catholic Church rules. Divorce and abortion are illegal. Clergymen interfere in politics routinely. Sex education is labelled as a work of the devil. Forgiveness is as easy as sin (Wiki "Imelda" and "Erap"). Ishmael Bernal's HIMALA truly was our cinematic miracle. It confronted our diseased culture of blind faith and asks us to question what is right, and not to be one of the mindless zombies crawling up a hill on its knees.