"Miss Navajo" is available for instant streaming on Netflix and SundanceNow.

Women's History month is just the right time to watch, "Miss Navajo," a documentary that premiered at Sundance in 2007 and was broadcast on PBS the same year. The title alone may turn people away if you are, like me, not a big fan of beauty pageants but Miss Navajo is the kind of pageant that perhaps even Gloria Steinem could get behind.

That might seem like a contradiction as I'm preparing for a weekend of conformation AKC shows in an attempt to earn a title for my dog. There's a lot of primping that goes on at dog shows. From the outside, you might think that dog conformation trials are like beauty pageants.

To compete in beauty pageants, women and young girls must learn how to walk in high heels, never had a bad hair day, keep your buttocks in your custom swim suit and be a spokesmodel. I know that's oversimplification of the beauty pageant circuit, but shouldn't we teach girls and women to use their intelligence over their beauty? In this wifi smartphone culture where people are too often quickly judged hot or not, every day has the potential to be a judgment day.

Consider the awful fashion police cattiness of a recent Yahoo report on Sundance. Yahoo decided to hold their own beauty pageant, asking women on the street to twirl around and show off their outfits, but some of these women later were labeled fashion don'ts. Pretty mean girlish, don't you think?

What about the men at Sundance? Are they all metrosexuals? Do some of them slosh around the snow in practical but unfashionable clothes? Then there's that sneer about wearing something old when I guess Sundance from Yahoo's perspective demands something new?

I don't know how many Sundance Film Festivals the Yahoo fashion police crew have attended. Perhaps they missed this gem, "Miss Navajo." Directed by Bill Luther who is part Navajo (and Hopi and Laguna), this movie was filmed in 2005 and 2006 and follows the then 21-year-old Navajo woman, Crystal Frazier, as she prepares and runs for Miss Navajo.

Things don't go smoothly. Luther begins the documentary with a woman speaking in what we suppose is Navajo. No subtitles are provided. Frazier sighs and asks, "Could you repeat that question in Navajo, I mean English please?" You think, at first, that doesn't bode well for Frazier, yet the clip wins our sympathy as we then go back in time to see how Frazier and other women prepared for the pageant.

Frazier doesn't look like the average Miss American or child pageant contestant. She wears glasses. Her hair isn't done up in a well-sprayed 'do that threatens the ozone layer. Her cleavage isn't displayed precariously with only sticky tape (or the stuff that holds down toupees) keeping her breasts in place. She doesn't have that wide smile with sparkling white perfect teeth. She wears little or no make-up.

This isn't a take on the ugly duckling misfit as we saw in the fictional comedy, "Little Miss Sunshine." Frazier's appearance is about the same level as her fellow contestants, but we don't know this immediately. At home on her family's ranch, Frazier's a country girl and I don't mean glamorous country girl of the Dolly Parton big hair and rhinestone mold. This is a girl who rides a horse and mucks about in sensible clothes that wouldn't pass the Sundance fashion police ambush videos. Yet that down-to-earth practicality is a good thing because some of the required skills for Miss Navajo aren't pretty. This is a pageant some feminists could get behind, but not PETA.

At the Miss Navajo pageant, there are no bathing suits, but there is some butchering. The competition is open to young women, usually between 19 to 25. The contestants must be single and are required to speak Navajo, build fires, cook traditional fry bread, sheer sheep and butcher livestock. The last two things would get a red flag from PETA if the protestors were allowed on the reservation. Luther gives us a glimpse of these activities but refrains from giving us the gore--that would distract from his focus.

The dress up part of the pageant is more about looking good in contemporary versions of the traditional dress and that means a lot of silver and turquoise jewelry, but not a lot of skin exposed. Talent or skills could be something like dancing or weaving. That's what happens now, but it wasn't always the case. 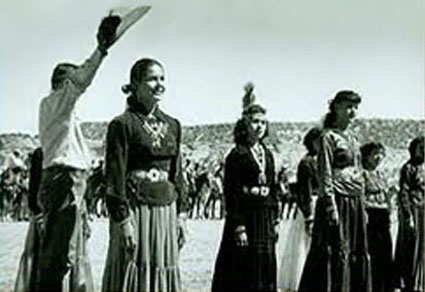 When the first Miss Navajo was held in 1952, the contestants only had to look pretty and smile. A vote was taken informally like at a bar--someone held a hat over the contestants and guesstimated the number of supporters. Over the years, the Miss Navajo competition has become a way of preserving culture. Director Luther interviews past winners such as the late Ida Gail Organick (1958), Marilyn Help Hood (1977-1978) and Radmilla A. Cody (1997-1998) to give us an idea of the competition's evolution.

Frazier's family felt the competition pushed Crystal to learn Navajo, even if she isn't as fluent as she could have been. Yet Luther shows other contestants caught in the linguistic tangle. (The PBS website for the documentary includes Quicktime recordings of Navajo.) With language, both men and women need to join the conversation and I wondered how the Navajo encourage their young men to preserve culture. Less than a century ago, it was the Navajo men who used their language to develop a secret code during World War II. Their story is told in the 1998 History Channel documentary "In Search of History: Navajo Code Talkers." Iwo Jima was one of the places where the Navajo Code talkers were key to the military operations. You never know when knowing another language might come in handy.

Language is a practical skill and a window into the cultural past. Something of that can be seen in dog shows. After reading about the Yahoo Sundance fashion "pageants," I went out to walk my dogs. The weather's not cold enough in California for me to have a substantive cold weather wardrobe. The Yahoo fashion police would have plenty to snear at, but my morning walks are to improve my dogs' confidence and chances in the show ring, I walk them at a trot, make them balance on walls or jump over them. One breeder of a sledding dog breed commented that he runs his dog six miles a day. We aren't at that level yet, but collie conformation judges like to see dogs with a powerful, balanced trot. The judges are looking for a stride that could take the dog over the glens of Scotland while herding sheep. Many collie breeders also check their dogs for herding instincts as we will later this year. Currently my dogs only herd dust bunnies.

My entry into the dog show ring has given me a new respect for breeders and their professionalism. Likewise, Luther's documentary provides a different view of pageants. "Miss Navajo" illustrates how an ethnic community transformed what started out as a conventional American beauty contest into something positive and practical. The documentary on the Code Talkers recounts how misguided American mainstream education attempted to extinguish the Navajo language. Who would have thought that a pageant could be used to strike back?

Next Article: Inside Kubrick's Room 237 Previous Article: A little black dress makes the world go round