Etheriel Musings: A Journey in China

Chinese Documentaries: an Inside Look 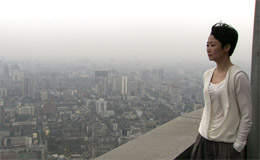 Chinese documentary films are important because they reflect, from the closest distance possible, in the most direct way possible, the rapid social, political, and cultural changes happening in China right now.

You can argue that conventional journalism provides larger quantities of information in faster real-time -- though in a way, it faces greater restraints. The time-sensitive nature of the journalists' occupation, in combination with the bureaucratic red-tape they face in a country such as China, means that information often leaks out in jagged pieces, providing a partial view but lacking the whole.

A well-crafted Chinese documentary can quietly bring together those pieces, fill in the gaps, and provide a deep and thorough look into a country that much of the world is fascinated by, but hardly ever sees, and often misunderstand.

Chinese documentaries are a relatively new cinematic development that dates back to the late 1980s. Much of the earlier decades in Chinese cinema is dominated with fictional features and plagued by propaganda films. It was an interesting time, where what unfolded onscreen, directly and indirectly, subtly and ironically, reflected what was happening in society at large. Times like the Cultural Revolution remain an unspeakable period for many who lived through it, and an unimaginable time for those who did not. Cinema is a strange form of collective memory, and in a place of ancient kingdoms and modern industrialization, it manifests itself in strange, mysterious ways.

To get a general picture of the history of Chinese documentaries, take a look at Lu Xinyu's 2003 book, Documentary China: The New Documentary Movement in Contemporary China, where she described the movement, dated to the late 1980s, as "a new way of looking at the world from the grass-roots up; a way of clearly understanding what drives different classes to survive and what feelings they have. They see history as 'wide open' and 'clear,' promising that everyone has the possibility to be recorded in history. They create history."

For history and character of some of the newer works, take a look at The New Chinese Documentary Film Movement: For the Public Record, edited by Chris Berry, Lu Xinyu, & Lisa Rofel (Hong Kong University Press; distributed in the US by University of Washington Press). A synopsis can be found here, and parts are quoted below:

The informal quality of independent film and video culture in China means that systematic information about the films is absent. There are no statistics on the numbers of independent documentaries produced in China, for example. Along with the independent films themselves, a number of independent screening events and venues have developed over the years. New documentaries get known by word of mouth - and blog - as a result of being shown at these sites. But going from hearing about the films to seeing them is not straightforward, because it is not possible to buy most of the documentaries as commercially distributed DVDs. On the other hand, the prevalence of informal distribution circuits in China helps to compensate for this, and in practice people who are interested in independent documentaries copy and swap DVDs actively to build up their collections. Our research would have been impossible without the generosity of numerous documentarians, who were kind enough to give us copies of their own works." 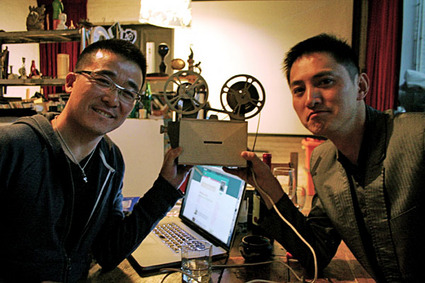 Without going into academia and history, my view of Chinese documentaries has been a personal and recent one, built from conversations in the last two months with filmmakers, cinematographers, producers, non-profit organization directors, and people who are simply passionate about documenting the history of China as it happens.

The collective goal seems to boil down to one simple thing: How do Chinese people keep on telling as much truth as possible about their way of life in China, have as much of it witnessed unobtrusively and honestly by the world at large as possible, and at the same time remain commercially sustainable and therefore, ongoing?

The consensus on how to achieve that is equally simple: more artistic success and (yes, and) commercial success.

Better-produced films, continued artistic innovation, attention to details, and much, much needed marketing to get people in front of screens.

The issues have never been lacking. The raw materials have never been lacking. What is lacking is an efficient and effective production system that help the filmmakers who - often working alone, often inexperienced in everything outside of shooting - to make the most and best of their hard, sweat-drenched, sometimes life-risking work, to help bridge what they see with what the world -- all those who are not standing shoulder-to-shoulder beside them -- sees.

That bridge is so, so, so important.

Unlike some of the higher profile documentarians in North America and Europe, the majority of documentary filmmakers in China are working alone or with a skeleton crew, without shooting permissions, and often little to no funding. 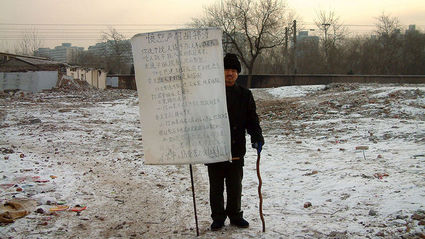 Zhao Liang, director of Petition (2009), when asked how he kept on shooting over 12 years to finally complete his harrowing documentary on the journeys of those who struggle within the Chinese legal system, traveling thousands of miles from their impoverished countryside villages to BeiJing to seek justice which remain all but a dim glimmer on the horizon, replied: " It's not that I wanted to shoot for 12 years. It is that once I started, I could not stop. I just could not." 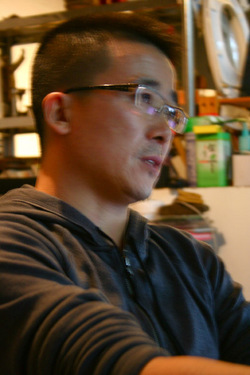 Watching the film, you can see the frame shaking as he runs after a petitioner, and hear the heavy breathing as a police hand swallows the view. Zhao started as a photographer, and continued to work in that capacity throughout all the years of filming. "Gotta live," he said.

Even when the raw footage is painstakingly obtained, edited, and completed into a feature documentary, the struggle is not over. To get a film commercially distributed in China (both theatrically and on DVDs), one must apply for permission from SARFT (State Administration of Radio, Film & Television), an executive government branch that directly controls state-owned enterprises at the national level involved in radio, films and television, such as China Central Television, China National Radio, China Radio International, as well as other movie/television studios and non-business organizations. SARFT is also in charge of censoring any materials that might be objective to Chinese government or cultural standards.

What are the criteria used to measure these "cultural standards," you ask? There are some solid guidelines, like the language of dialogue spoken in film must be that of Mandarin, the official language of PRC. However, the majority of factors that contribute to a decision of grant or denial for theatrical distribution remains a mystery to most. On the other hand, there is an unspoken public understanding of the government's predictable reaction to certain kind of materials, and the invisible yet immovable boundaries that one must remain within, content wise, if one wishes to see one's film play publicly and legally in theaters in China.

What does all this mean? It means that some of the most socially valuable, artistically merited films will never see the light of a public cinema in China today. It means that if those films, known as underground films, will ever be seen by an audience in China, it will be through a private showing, unmarked, unmarketed, and - yes - uncharged (because by law, selling tickets make it a non-private screening).

It means that the filmmakers who choose to make these kind of films will not be able to make commercial profit from their films in China.

It means that if anyone wants to see these films in China, they need to watch them free of charge (online streaming) or illegally (pirated copies). 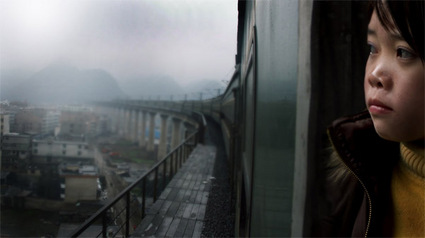 Such circumstance results in the livelihood of Mr. L, who I met on my 2nd day in Beijing, as he came to deliver a bunch of dvds to LiXin Fan, director of the award-winning Last Train Home.

The dvds delivered, and bought, by Fan are none other than... can you guess it? Yes, Copies of his own films.

For $10rmb (1.53usd), you get a glossy, colored outer sleeve, an illustrated dvd contained in another matching colored sleeve, with a fold-up mini poster all wrapped in clear plastic and beautifully presented in a package that easily rival a professionally produced copy in the west selling for $20usd. 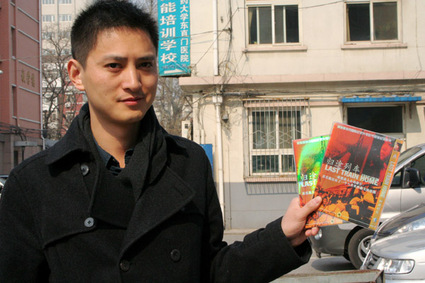 And the quality of the film? Crisp. Clear. With multiple subtitles. "Pretty good," quipped Fan, "better than what I can make myself for that price."

When asked why he's buying so many copies, he replied that he's giving them away as gifts to friends and family prior to theatrical release of the film in China.

When asked if he has any problem buying pirated copies of his own films, the answer came brief and sure: No.

"I'm glad that it's getting pirated," Fan said, "That means there is a demand for them. The buyers are the best indicators of the market. Besides, what can I do? It's better that someone is paying something to see the film, rather than nothing at all."

"But you're not getting any of the money being paid by the public to see a film that you made." I tried to dissect the logic (or lack of) of the situation: "Instead, you are paying to profit someone else who is illegally making profit off of your hard work, in order to promote your hard work?"

I looked at him. He looked back. A small smile passed in between...expanding.

"Ah, the mystical land of China." He laughed.

Shiqing Wang, the cinematographer for the award-winning Up The Yangtze (2007), told me that he, like everyone else, started out shooting documentaries as a "one-man show," camera on shoulder, into the wilderness. "But that can't last," he said. " You can shoot your first film that way, maybe because you have to, but as soon as you have some credentials and experience you need to get a crew together. Shooting alone is shooting for yourself. Film is a group art. You can't make a good film alone." 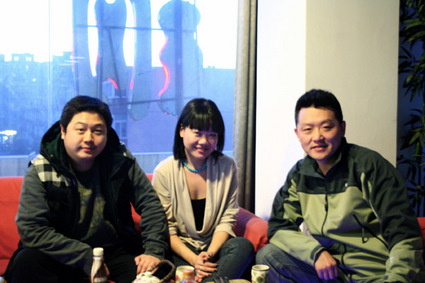 Perhaps because of the relative youth of documentary cinema in China, the concept of making a film as a group collaboration is still a new one for many to grasp. Some of it has to do with the topics: heavily political, social, and often chilling, they are not instinctive for sharing. Some of it has to do with culture: an emphasis on individual persistence and personal pride in the face of difficulties, resulting in an innate resistance to ask for outside help. Much has to do with the environment: governmental cooperation being a fairytale that most have stopped believing in, making larger crews more visible and easier to track, especially when one doesn't have a shooting permit.

However, all those above are precisely the very reasons that open collaborations are the key to the success of Chinese documentaries in the future. Aside from passion, international producers, good editors, and artistic visions that move and attract the audience is the only way to move these valuable images from the underbellies of the world's fastest growing economy to the front of all those who have yet had the chance to see it for themselves, and those who still see China as a far, strange, mystical land of the East.

The truth is, China is neither far nor strange. Its mystery supplies the jeans you wear, the bowls you eat from, the sheets you sleep on, and the cellphones you talk into. Go to a theater, find a Chinese documentary playing, and buy a ticket. Why not? You have bought everything else. Give it a chance... and maybe you will come to see what I see: a complicated land that is at times easy to like, hard to love, but that you can never, ever look away from.

THE DITCH, by Wang Bing

UP THE YANGTZE, by Yung Chang

A large list and summaries of Chinese docs: http://chinadocs.blogspot.com/