Liz Garbus, the award-winning documentarian behind films like “What Happened, Miss Simone?,” makes her narrative directorial debut with the powerful “Lost Girls,” an emotional examination of one of the modern era's most famous unsolved cases. When non-fiction filmmakers turn to directing actors, there’s often something lost in the process, but Garbus proves a natural at the transition, drawing one of the best performances in the career of the great Amy Ryan. Having read the book and knowing a lot about the case, I was skeptical that this tragedy could be turned into an effective drama, but Garbus pulls it off, making smart decisions at every turn and finding a throughline in a story that technically doesn’t have an ending yet.

The way she does so is by focusing on Mari Gilbert (Amy Ryan), an Ellenville mother whose life becomes a waking nightmare when her daughter Shannan disappears. It was May of 2010 when Shannan Gilbert simply vanished. Calls from her sister (Thomasin McKenzie) went unanswered and panic really set in when the police revealed to Mari that Shannan had made a 911 call from Oak Beach the night before. Even though Shannan was panicked and sounded like she was running, the authorities didn’t show up for almost an hour. Shannan was gone. And that was just the beginning of what Garbus reveals in the very first frames is still an unsolved case.

What happened next turned the story of a missing young woman into something that has obsessed true crime fans for years. While searching for Shannan, a body was found in a burlap sack, but it wasn’t Shannan. And neither was the next body found off Ocean Parkway in a sack. Or the next. Four bodies were found early in the investigation, hinting at a serial killer in this wealthy part of the country who was killing sex workers and dumping them. By the time it was over, more than ten bodies would be discovered, including Shannan’s, although her case has often been considered separate from the others. It’s very possible that the disappearance and accidental death of Shannan Gilbert led to the discovery of a serial killer, or that she was a victim herself. We still don't know for sure. We may never know.

A lot of filmmakers would have approached this case like a procedural, focusing on the evidence, conflicting stories, conspiracy theories, and other case details. That’s not “Lost Girls.” If anything, Garbus and screenwriter Michael Werwie point fingers at the authorities—represented by characters played by Dean Winters and Gabriel Byrne—and accuse them not only of incompetence but lack of concern because the missing women were prostitutes. Most powerfully, Garbus works with Ryan to make Mari Gilbert a fully-realized character. They don’t overplay the fact that Mari knew what her daughter was doing, and possibly even liked the extra cash flow her child earned from a dangerous profession, or that Mari felt extra responsibility because she had once given up Shannan to foster care. She couldn’t give her up again. But these are just finely-tuned character details, not the melodramatic stress points they would have been in a lesser film.

By focusing on Mari’s fight to get her daughter’s case the attention it needed to be solved, “Lost Girls” finds its narrative thread. It’s incredibly tough to build rising action in a case that remains unsolved, but we feel Mari’s increasing frustration, and suspicion of some of the key players on Oak Beach, including a creepy doctor played by Reed Birney. Not all of the threads work—Lola Kirke plays a young woman who returns to prostitution and Mari’s attempt to save her because she couldn’t save her own daughter struck me as a little manipulative, but it’s not held for long. And Kevin Corrigan feels more like a plot device than a character, someone to point a finger at the main suspect.

Most effectively, Garbus allows the social themes of “Lost Girls” to rise organically through the passion of the mothers and sisters that lost loved ones. In one of the film’s best scenes, Mari goes to the gated community and the locals there call the police. The cops get there in “less time than it takes to make a sandwich,” but they couldn’t get there when her daughter called 911? The fact is that response times are different for rich beach house owners than sex workers. And as long as that remains the case, people like the Long Island Serial Killer will continue to get away with murder. And while this isn't another Garbus documentary, she’s made a film with all the power of great non-fiction storytelling, and found a way to make the emotional message of this story hit home in a way that it wouldn’t have otherwise.

This review was originally filed from the 2020 Sundance Film Festival on January 29th, 2020. 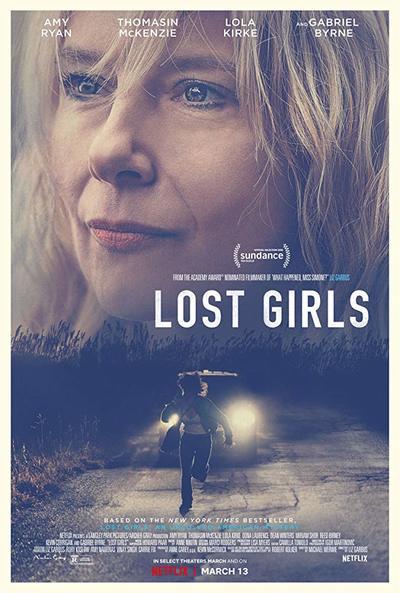