Don’t get too excited, you fans of ACTING out there. While Nicolas Cage and Kelsey Grammer are co-top-billed on the poster for this faux-gothic faux-noir thrill-deficient thriller, the two master thespians are not given the opportunity to play off each other. At least not until the very end.

It’s hurricane season on the title Grand Isle and a young fellow named Buddy (bland, floppy-haired Luke Benward) is all bloodied up in an interrogation room, speaking to Grammer, who plays Detective Jones. He may be a detective but he’s in full Movie Southern Lawyer mode: cream-colored jacket and florid drawl. An analog tape recorder takes down their chat. Before you can get too concerned about the fact that Buddy’s being interrogated with open wounds on both his arms and in the middle of his face, we’re in flashback mode.

Buddy’s a new dad and a failing entrepreneur, so he makes do as a handyman. He picks up the unfortunate assignment of mending a fence at the house of Cage’s Walker, a surly ex-Marine with a hotsy-totsy wife named Fancy (KaDee Strickland). The reason Walker’s fence is broken is that the night before a human being fell into it after being shot by Walker. The dude was trying to burgle the house, but still.

This fence-mending is taking place on Fancy and Walker’s wedding anniversary, which Walker has forgotten, as surly ex-Marines will. Irritated, Fancy turns attention to Buddy out on the lawn. She sashays his way with a glass in hand. “You want some?” she asks. Buddy looks up at her breasts. “Ice tea,” she explains. But she means the breasts, too, as Buddy learns when his truck won’t start and he’s forced to take refuge in the Walker manse as the storm comes in.

The trio has a properly gothic dinner, complete with mint juleps made from Fancy’s grandmother’s recipe and really inappropriate conversation. How did the couple meet? “It was shortly after Walt was in ‘Nam ... I was singing in a club in New Orleans,” Fancy says. Isn’t this the plot line of several earlier Nicolas Cage films? That’s not the inappropriate part, the inappropriate part is when Walker asks of Buddy, “When was the last time you had your cock ... sucked?” It’s a classically eccentric Cage line reading, too. (Not to be outdone, Grammer lays on the southern accent thicker and thicker, as in “You wanna go waaan lying to yerself we can do that all night ..." )

Later, after a lengthy speech about the military industrial complex, Walker offers Buddy $20,000 to kill Fancy. Mercy killing, he says, because Fancy’s got blood cancer. He walks in on Fancy lounging in her bathtub singing along with Billie Holiday’s “Strange Fruit.” If that’s not offensive enough, she then gives a really dumb precis of the song. But he doesn’t kill her. At least not in his version of the story. But then there’s the issue of just what is in the Walker basement. And why Fancy wants to shoot Buddy rather than allow him to go down to it.

Director Stephen S. Campanelli, a veteran of Clint Eastwood’s camera crew, holds up his end of the job with stolid if not stalwart competence. He, or somebody, might have profitably intervened in the matter of the inane and simultaneously overblown and slack script by Iver William Jallah and Rich Ronat. But as no one did, there’s not much to invest in here. Not even the final Cage-Grammer face-off. 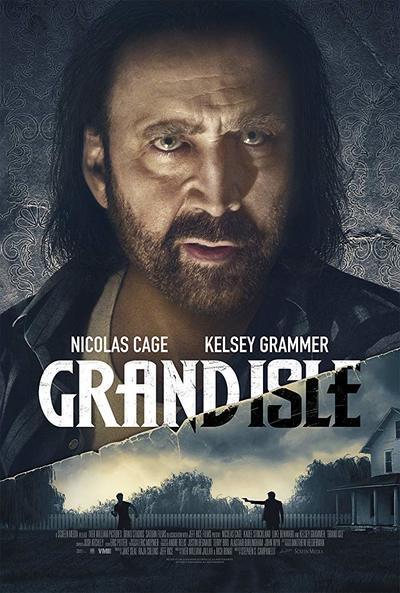