“Bros,” co-written by and starring Billy Eichner, has been touted as the first mainstream Hollywood studio-backed rom-com to feature gay men as the leads. Directed by Nicholas Stoller and produced by Judd Apatow, the film consciously evokes tropes from the hey-day of studio-backed romantic comedies, including nods to more than one Meg Ryan classic and a compelling lead performance from Eichner. However, its perpetual commentary on the mainstreaming of queerness remains at odds with its very desire to tell its story within the Hollywood system.

Eichner plays Bobby Leiber, a born and bred New Yorker who hosts a queer history podcast called 11th Brick (because as a cis white gay man that’s probably the brick he’d have thrown at Stonewall) and is the director of the first national LGBTQ history museum, on the brink of finally opening its doors. At 40, Bobby has spent most of his life alone and has convinced himself he’s better off this way. “We’re horny and we’re selfish and we’re stupid. I don’t trust these people,” he tells a group of friends when explaining why he prefers hookups to anything long term.

This being a self-aware rom-com, Bobby’s life and plans change when he meets Aaron (Luke Macfarlane) at a club. Before we know it the two have decided to be emotionally unavailable together. What follows is a by-the-books romantic comedy filled with dates and sex and fights and meeting the family, all with a queer twist. The soundtrack filled with jazzy Nat King Cole songs helps evoke a Nora Ephron-style New York Autumn.

Running B-side to Bobby and Aaron’s love story are the preparations to open the museum. Here we see Bobby’s (and presumably Eichner’s) passion for queer history and community. The museum board is made of a variety of queer people, including a butch lesbian, a belligerent bisexual, a Black trans woman, and a nonbinary person. Unfortunately, each character comes across as a cliché, which is likely by design as the whole film uses queer identity as a springboard for jokes. Many of the jokes do land, because if anything queer people know how to laugh at ourselves. However, what Eichner and co-writer Stoller seem to have forgotten is that a rom-com like “When Harry Met Sally” is so iconic not just because of Harry and Sally's authenticity, but that all of its characters feel like real people.

While most of the characters are underdeveloped, Eichner’s razor-sharp wit and caustic humor shines through in the dialogue and situational comedy as he skewers many aspects of gay dating culture, from Grindr hookups to obsessive gym usage to group sex. The script is not peppered with queer history and countless name-drops of queer icons like Cher, Barbra Streisand, and Mariah Carey.

Eichner also takes jabs at the modern commodification of queer culture within the entertainment industry, from the “Queer Eye for the Straight Guy” reboot to the universal love of “Schitt’s Creek” to Hallmark’s inclusion of queer rom-coms (going so far as creating fake titles like "Christmas with Either" and "A Holly Poly Christmas") once they realized a profit could be made. Although Eichner rejects this very sanitization of queerness, the self-aware rom-com beats in “Bros” find it treading the same waters.

Late in the film, Bobby tells the museum board, “We fight like crazy, and we always have, but you’re my people.” This is the guiding light of “Bros”: to show the gays as messy, to show the queer community as more than a monolith, to have them be as loud and proud and take up as much space being their authentic selves as possible.

And it really is great to see a mainstream Hollywood film of this magnitude with this kind of representation from throughout the LGBTQ community. However, it defeats its own message of bringing queer history and queer life out of the margins when it centers the love story between two cis, conventionally attractive white gay men. Eichner is the first to point out his privilege; early on his character wins an award at an LGBTQ gala for Best Cis White Gay Man of the Year. But being self-aware isn’t as impactful as de-centering the cis white gay man as the lead, especially when every other queer character in the film still remains on the margins of the story.

“Bros” is clearly a labor of love for Eichner, and as a belligerent bisexual (petulant pansexual?) myself, I laughed a great deal at the comedy. As a commitment-phobe who found romance late in life, I was moved by the core relationship. And as a country girl, I felt like the running Garth Brooks joke was tailored specifically for me. But there's also something at odds with Eichner’s mission to bring queerness, gay sex, and gay dating in all its texture to mainstream Hollywood studio-backed cinema, while in the same breath sanitizing queerness to be palatable to straight culture.

For a movie so focused on the importance of mainstreaming queer history, it seems to care very little for the queer films that came before it. Bobby and Aaron discuss how often straight male actors win praise for playing gay cowboys, but beyond digs at both “Brokeback Mountain” and “The Power of the Dog” (directed by and starring straight people), the only other queer film mentioned is Luca Guadagnino's “Call Me By Your Name” in a throwaway joke about how it's the one queer movie to which all straight people compare other queer films. By only highlighting those few movies—ignoring queer cinematic pioneers in the process—“Bros” is as culpable of keeping queer history (in this case cinematic history) in the shadows as has happened to the other facets that Bobby’s LBGTQ museum is supposedly shining a light on. The point of the museum is to show history through a queer prism, yet the film itself doesn’t seem to view cinema in the same way. Worse yet, "Bros" thinks of itself as the most important pioneer solely because it's doing so on a mainstream level.

This review was filed from the premiere at the Toronto International Film Festival on September 10. "Bros" opens on September 30th.

The Blind Man Who Did Not Want to See Titanic 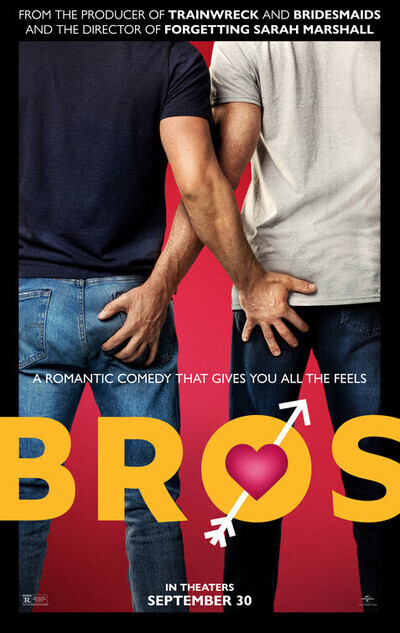 Rated R for strong sexual content, language throughout and some drug use.

A Vision of the Future: On David Cronenberg's Videodrome