Compatibility and taste: Bad sneakers and a piña colada, my friend 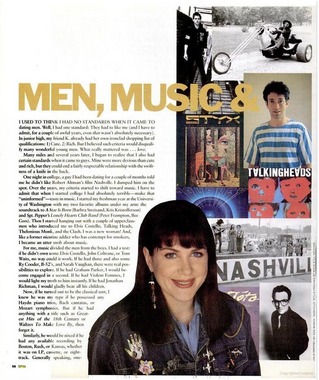 Somebody named Michael Jones -- essentially the same Mr. Jones Bob Dylan wrote about years ago -- appeared on HuffPo recently with a piece called "That Steely Dan Moment" -- you know, about a discovery of musical taste that makes you wonder if you could ever love the person who possesses it. The twist is that he's the one who falls short and doesn't know it. Turn up the Eagles, the neighbors are listening, Mr. Jones.

Anyway, I wouldn't have paid attention except that his story (who knows where or when it originally appeared if it was on HuffPo) reminded me of an article my friend Julia Sweeney did for the February, 1993, issue of SPIN magazine that was written and edited by the staff of "Saturday Night Live." It probably wasn't an entirely original idea then, either, but it was called "Men, Music & Me," and in it she discussed her assessments of collegiate and post-collegiate boyfriends -- using their cinematic and musical tastes as a guide. (Please also see my entry on Carl Wilson's book, "Let's Talk About Love: A Journey to the End of Taste.")

Many of us have done this sort of thing, and you probably have, too. Quentin Tarantino, for instance, has famously boasted of screening dating prospects... by screening Howard Hawks' "Rio Bravo" for them and seeing how they react. Which is as good a test of compatibility as I can think of. This is beyond matters of mere taste. We're actually talking about core values here, so the approach is only superficially superficial. Honestly, how can you love or respect someone who doesn't connect with the art that speaks most deeply to who you are and what you value most in life? I might show (and have) "Only Angels Have Wings," "The Discreet Charm of the Bourgeoisie," "Barry Lyndon," "Sherlock, Jr.," "Miller's Crossing," "Nashville," "Salò: The 120 Days of Sodom." (Kidding about that last one! Once was enough, thanks!)

Anyway, Julia fell in love with "Nashville" when I showed it in a student film series in college. As she recalled:

One night in college, a guy I had been dating for a couple of months told me he didn't like Robert Altman's film "Nashville." I dumped him on the spot. Over the years, my criteria started to shift toward music. I have to admit that when I started college I had absolutely terrible -- make that "uninformed" -- taste in music. I started my freshman year at the University of Washington with my two favorite albums under my arm, the soundtracks to "A Star is Born" (Barbra Streisand, Kris Kristofferson) and "Sgt. Pepper's Lonely Hearts Club Band" (Peter Frampton, Bee Gees). Then I started hanging out with a couple of upperclassmen [ahem] who introduced me to Elvis Costello, Talking Heads, Thelonious Monk, and the Clash. I was a new woman. And, like a former nicotine addict who has contempt for smokers, I became an utter snob about music.

For me, music divided the men from the boys. I had a test: If he didn't own some Elvis Costello, John Coltrane, or Tom Waits, no way could it work. If he had those and also some Ry Cooder, B-52's and Sarah Vaughan, there were real possibilities to explore. If he had Graham Parker, I would become engaged in a second. If he had Violent Femmes, I would pledge my troth to him instantly. If he had Jonathan Richman, I would gladly bear all his children. [...]

Similarly, he would be nixed if he had any available recording by Boston, Rush or Kansas, whether it was on LP, cassette, or eight-track. Generally speaking, one-word band names were dire omens: Styx, Journey, Scorpions. Bad, bad, bad.

Now, sometimes a guy would have Heart (bad) but also have the Pretenders (good). So, that would compensate somewhat. Or, he might have Foreigner (bad) but then have the Ramones (good), and they would cancel each other out. Actually, for someone to redeem ownership of Foreigner, he would have to have the complete works of Bob Dylan (excluding the weird Christian ones and "Self-Portrait"). Or he might have Toto, and you'd have to run screaming from his house immediately.

As you can see, this got fairly neurotic. And, believe me, it wasn't like I was fighting them off. In fact, I spent most of this time in my own apartment looking at my own immaculate music collection.

Getting back to Steely Dan, though, really. If you can't appreciate sly musical jokes invoking Duke Ellington, Jimmy Rushing, Bob Dylan, Horace Silver -- or lyrics like "Who is the gaucho amigo and why is he standing in your spangled leather poncho with the studs that match your eyes? Bodacious cowboys such as your friend will never be welcome here, high in the Custerdome..." -- then there's just no hope for you.

ADDENDUM (3/31/10) Although I (and Julia in 1993) wrote the above with tongue in cheek, you will see from the comments below that I go back and forth on just how seriously I take it. Depends on the work, the artist and the individual, I suppose...

Complete back issues of SPIN are now available through Google books.