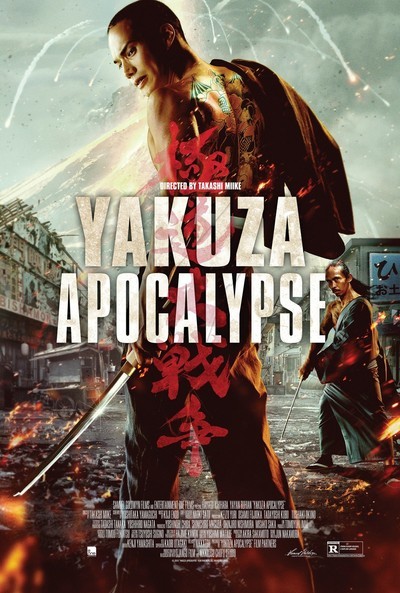 Rated R for strong bloody violence, a rape and language

You should know whether or not you're on the same wavelength as Japanese enfant terrible Takashi Miike's crazy-go-nutty gangsters-vs.-vampires action-comedy "Yakuza Apocalypse" by the time the karate-fighting, grenade-squelching frog terrorist transforms into a giant Godzilla-sized monster, and goes on a spree. I'm not exaggerating or funning around: there is a character named Kaeru-kun in this film who is described as "the world's toughest terrorist," and he dresses up in a frog mascot costume, and he knows kung fu. Really, really good kung fu. Still, before you meet Kaeru-kun, several burning questions are asked and sometimes answered, like what is a yakuza vampire, how do they eat, and what do they want? But viewers of "Yakuza Apocalypse" shouldn't worry about understanding the "why"s of the film. That may sound like self-indulgent nonsense, but Miike ("Audition," "Ichi the Killer"), the hyper-prolific creator of way too many deranged barn-burners to count, deserves your indulgence. "Yakuza Apocalypse" is a movie that operates under the assumption that there is nothing new under the sun, not after Fukushima Daiichi Nuclear disaster nor the Tōhoku Earthquake, so we might as well throw a whole lot of things together, and make something singularly screwy. "Yakuza Apocalypse" is, in that sense, a very good film, but only if you're willing to inevitably submit to its anarchic sensibility.

That may sound like a tall order, especially given how impenetrable "Yakuza Apocalypse" seems in the beginning. Don't panic—nothing has to make sense. Kageyama (Hayato Ichihara) is an apprentice to yakuza mob boss Kamiura (Lily Franky, of "Like Father, Like Son"). And Kamiura is a vampire. Kageyama is very loyal, earnest, and determined to become a great yakuza gangster. He's also unprepared to be turned into a vampire after Kamiura is dispatched by dweeby-looking martial artist (Yayan Ruhian, of both "The Raid" films), and a doofy-looking, gun-slinging puritan with a coffin-strapped to his back. Yes, it's a "Django" reference in a yakuza movie. No, it doesn't really matter.

Kageyama has a tough time transitioning from a recognizably human character into a blood-sucking vampire. You would find it difficult too if you went from tender, quiet romantic scenes with girlfriend Kyōko (Riko Narumi) to taking a couple of slugs to the chest and then dispatching bad guys while your palms get so hot that they are literally hot enough to cook an egg. Kageyama learns the basics of vampire existence from a fellow blood-sucker—civilians are more nourishing than yakuza, but civilian victims also become yakuza vampires—and is then turned loose shortly before he has to face off with Kaeru-kun, a villain whose arrival is foretold in hushed whispers: "He's coming."

That's thankfully not a warning viewers need to pay too much attention to. Miike isn't trying to shock de-sensitized viewers by overloading them with too much weird-ness. "Yakuza Apocalypse" is confident in its goofiness. It's the work of an older, more experienced button-pusher who still doesn't care to tell a traditional narrative. The film's confident fits of surreal, slapstick-y humor brings to mind the work of Ken Russell, specifically "Lair of the White Worm," a mid-period work for Russell, who at the time had become an accomplished provocateur.

Still, restless viewers may spend the first half of "Yakuza Apocalypse" hoping that Miike and screenwriter Yoshitaka Yamaguchi will settle down, and emphasize Kageyama's stabilizing romance with Kyōko. But that's not what "Yakuza Apocalypse" is all about. Kyōko and Kageyama's romance is earnest and very delicate, making it that much more bizarre, though no less out of place in Yamaguchi's unstable narrative. If all things can exist, including a torture dungeon full of crocheting humans, and a kappa/turtle demon, why not love? Or a butt-kicking frog terrorist?

I mean, look: "Yakuza Apocalypse" is an endurance test. It's almost two hours long, but it doesn't feel that long by the time it ends with a comically punishing fist fight, and then, oh, never mind, you won't believe me until you see it. There are moments when the film feels like a runaway train fueled by sheer chutzpah. But when you get to the end, and the frog terrorist gets hit by a truck—that's when you'll either start howling with insane joy, or swear off movies for a while. Either way, don't flinch—here comes the end of the world.