Just in case you are wondering, “Wilson” is not a sequel to “Cast Away.”

However, those who are white male jerk-averse, especially since there seems to be a surplus of them lately, might prefer the company of Tom Hanks’ silent volleyball buddy over the latest iteration of a kooky curmudgeon as unfiltered instigator of awkward confrontations and general annoyance.

But if anyone can make such a character not just amusingly tolerable but even somewhat sympathetic, Woody Harrelson—who rarely gets his proper due for his vital contributions to movies ranging from the "Hunger Games” franchise to last year’s “The Edge of Seventeen”—would be a good choice. He fully exploits his sarcastic delivery, scalawag smirk and an effective pair of cartoonish horn-rimmed specs to make his bitter and lonely middle-aged loser a droll companion. That is, if he doesn’t sidle up to the seat next to you on a near-empty bus and gripe your ear off about all and nothing.

This is not a new invention by any means. Lionel Barrymore’s misanthropic Mr. Potter followed the dramatic blueprint laid down by cranky penny-pincher Ebenezer Scrooge, while Walter Matthau injected a sardonic humorous element to the archetype in “The Odd Couple,” “The Bad News Bears” and “Grumpy Old Men.” Meanwhile, Billy Bob Thornton took middle-age misbehavior to the next foul-mouthed degenerate level in “Bad Santa.”

Lately, taking on such cranky roles has almost become a rite of passage for actors, mainly male but also female, of a certain AARP-eligible demo. Where would Robert De Niro and Shirley MacLaine’s late-life resumes be without such temperamental old-timers? Bruce Dern and June Squibb groused their way to Oscar nominations in “Nebraska” and Bill Murray has simply spun his younger wise-guy persona into similar sterling senior moments on screen. Jack Nicholson and Morgan Freeman went for it and scored a hit with “The Bucket List.” Kathy Bates (“About Schmidt”) and Lily Tomlin (“Grandma”) have struck gold in irascible lady roles. Heck, Larry David has been playing a heightened version of his uncensored, off-putting self in “Curb Your Enthusiasm” on HBO since 2000 and it is about to return for a ninth season.

One reason why these characters are perennials? They actually ring true. As anyone who has been in the presence of those enjoying their golden years, people often act as if their advanced status gives them license to say whatever they want, non-PC consequences be damned. I myself have been known to make a somewhat inappropriate comment or two. Basically, it's now or never.

As adapted by Daniel Clowes (“Ghost World”) from his graphic novel and directed by Craig Johnson (“The Skeleton Twins”), this hard slap at the perceived stupidity of the world by a disenfranchised citizen pitches its black humor in appallingly funny if occasionally poignant episodes as we get to know the title character’s Minnesota-based urban milieu. That is, before the plot opts for cop-out sentimentality and begins to melt into goo.

Much like Thora Birch’s Enid in “Ghost World,” Wilson’s street-corner apartment atop an out-of-business karate studio is awash in flea-market finds and old paperbacks stuffed in every corner with a large poster of “Moby Dick” as the centerpiece. There is no hint that Wilson ever had a vocation of any sort. A plus: He loves his dog, a wire fox terrier named Pepper. A minus: His wife left him 17 years ago after she ran off to Los Angeles, aborted their baby and became a drug addict and possibly a prostitute. His life, such as it is, turns upside-down when his only friends decide to move and he gets a call that his father is near death in a hospital. His planned bedside reconciliation with his dad sadly arrives too late. Wilson is so desperate for companionship, he seeks out a shady childhood buddy named Olsen (David Warshofsky), who is basically a disturbed hermit who wishes his 90-something father would meet his demise already. After a few minutes of trying make a connection, a grieving Wilson thanks him for the reminder that he’s a “toxic soul-draining vampire.”

After a “meet-strange” with a woman who can’t stop talking about her boyfriend of six years who left her because he was a “homo” (Margo Martindale, supporting player supreme), she helps Wilson track down his ex, Pippi (Laura Dern, always a pro at neurotic women on the verge), via Google. Turns out she has cleaned up her act and is semi-glad to reunite. But after they cozy up in bed, she reveals that she actually put their baby up for adoption. Of course, Wilson hunts the girl down without warning and she's revealed to be a portly goth high-schooler (Isabella Amara, who knows how to squeeze the most out of a sour look) with attitudinal issues. In other words, a surly chip off the old block.

From there, Wilson attempts to act as if he is now a family man despite the fact that his daughter’s adoptive parents know nothing about his existence. This results in a misbegotten odyssey to visit Pippi’s smugly self-satisfied suburbanite sister, Polly (Cheryl Hines), and her ultra-normal clan, with violently disastrous results. Wilson should have known better. When he tells Pippi that her disparaging sister is “a living death,” she complains that he says that about everyone. He answers, “Was I wrong?” Even Wilson is sometimes right.

I do appreciate that Harrelson is surrounded by a bevy of top-notch actresses, all of whom bring out different shades in Wilson’s crotchety demeanor. Although if Judy Greer is reduced to being an accommodating girlfriend ever again, there should be a law declared to ban such wastefulness. But while “Wilson” peters out at the end, one can’t totally dismiss a movie that gets away with a visual “Umberto D” joke and showcases probably the worst tramp-stamp tattoo ever. 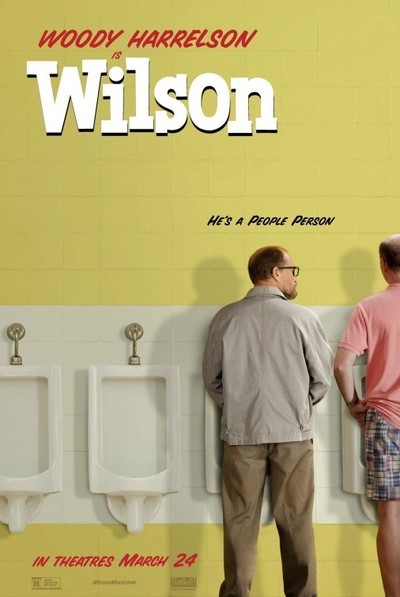 Rated R for language throughout and some sexuality.