Maggie Q and Michael Keaton have such snappy, sexy chemistry with each other in “The Protégé,” it’ll make you wish their connection were in the service of a better movie. Instead, they bounce off each other—often quite literally—in this capable but ultimately forgettable late-summer action-thriller.

The film from veteran director Martin Campbell, whose journeyman pedigree includes a couple of Bonds (“GoldenEye,” “Casino Royale”) a couple of Zorros and that “Green Lantern” adaptation Ryan Reynolds makes fun of himself for starring in, offers some solid fight scenes, a few gnarly kills, and breathless pacing. “The Protégé” is slick and glib and constantly on the go from city to city and genre to genre. It’s also a mismatched buddy comedy and a doomed romance. But what it’s about—seeking revenge for the revenge killing of a 30-year-old assassination—isn’t as intriguing as who it’s about, and that’s Maggie Q’s character.

Anna is a highly trained contract killer who’s cool and efficient. She also has impeccable taste in clothes, food and literature—the rare bookstore she runs in London is both an innocent front and her true passion —and she’s quick with a quip regardless of the situation. An opening flashback to 1991 shows us where she came from: Da Nang, Vietnam, where she was cowering in a closet, carrying a gun and surrounded by dead bodies when Samuel L. Jackson’s swaggering assassin Moody found her and forged her into the killing machine she is today. (Jackson, of course, can play this kind of foul-mouthed and irreverent character in his sleep.) But a reckoning for a decades-old death forces Anna to confront both her traumatic childhood and her cultural roots. At least, it's suggested that's what's supposed to happen here; "The Protégé" never digs too deep en route to its abrupt ending.

When bad guys come after Moody, she must go after them. Along the way, she gets tangled up with Keaton’s Michael Rembrandt, a ruthless fixer for a billionaire criminal who projects himself as a global humanitarian. From the first moment she meets him, pretending to be a customer in her bookstore and effortlessly quoting Poe as a form of flirtation, the two share a banter that’s so light and zippy, it feels like it fluttered in from a totally different movie. Their dialogue improves the mood significantly, but it also seems out of place within this violent, bloody setting. We can tell he cares about her because he tells his beefy underlings to go easy on the waterboarding once they’ve captured her, albeit briefly. And listening to the two purring at each other over drinks about the distinct sounds different handguns make does clang a little.

Still, Campbell and editor Angela Catanzaro were wise to let the fight scenes between these two play out so we can actually see the choreography, see the work they’ve put into these roles. Keaton is nearly 70 years old going toe-to-toe—and seemingly holding his own—with the bad-ass goddess that is Maggie Q. And of course, Keaton brings inspired menace to the role as well as a twinkle in the eye with his playful delivery.

But “The Protégé” is primarily an action picture, even as it offers lip service about atoning for sins of the past. The script from writer Richard Wenk, whose muscular oeuvre includes the Denzel Washington “Equalizer” movies, a “Jack Reacher” and an “Expendables,” revisits the horrors Anna witnessed in the past but seems more interested in the perils she can escape in the present. This is the kind of movie in which a security team full of generic thugs in matching leather jackets and buzz cuts can fire a million rounds at her and not hit her once, but she can fire exactly two bullets and take down both guys who are chasing her. And when she grabs onto a firehose to leap through an atrium, it’s just the right length to set her down safely in the lobby.

There’s never much doubt that Anna will outsmart and outlast whoever dares to come for her, from Bucharest to London and back to Da Nang again, so there’s not much in the way of suspense. She’s the placid and unflappable center of this glossy version of a B-revenge thriller. Merely the first few notes of the overplayed “Feeling Good” as she begins her day with a jog signal her invincibility. While that sounds like nitpicking, it’s the kind of safe and superficial choice typical of a movie that isn’t interested in even starting to explore how this woman feels about all the death she’s left in her wake, or what kind of life she may actually want for herself. 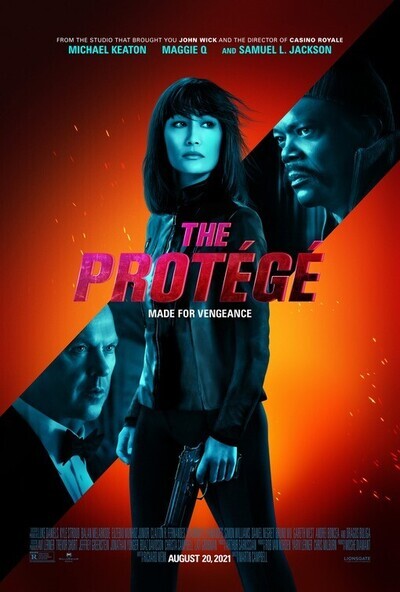