Chinese/American co-produced action-fantasy "The Great Wall" doesn't feel like a McDonald's-ified version of a Chinese film. True, when square-jawed Matt Damon fights alien monsters side-by-side with Chinese soldiers, the film sometimes feels like a spectacular big-budget action epic with a golden-age western-style hero. But the makers of "The Great Wall" succeed where many westerns fear to tread, namely by un-ironically valorizing the selfless collectivism that has become a cultural touchstone of modern Chinese cinema. "The Great Wall" has significant problems—namely with Damon and sidekick Pedro Pascal's lack of bromantic chemistry—but chief among its rewards is its ability to marry its Eastern and Western sensibilities.

Damon and Pascal play William and Tovar, respectively, wandering European mercenaries who are captured by the Chinese army of the Nameless Order shortly after they slay a mysterious green monster. The monster, they are told, is a "Tei Tao," one of a horde of creatures that attacks the now-famous Great Wall of China once every 60 years. William and Tovar are initially unmoved by the Nameless Order's considerable plight; they want to make their fortunes by stealing gunpowder from their hosts, and selling it to European traders. But eventually, William and Tovar's agendas drift apart after William becomes seduced by the formal control and selfless zeal that defines the Nameless Order.

And who wouldn't be impressed? The Nameless Order marches around in colorful suits of armor that come in hues of indigo, crimson and cerulean. They launch themselves at their enemies using pulleys, bungee cords, hot-air balloons, boulder-spewing catapults, and many, many arrows. Each crowd shot in this film is remarkable, but not because director Zhang Yimou ("Hero," "House of Flying Daggers") and his assistant directors know how to direct extras. On the contrary, the impassive faces of the Nameless Order's soldiers remind us that all of these people, together, are remarkable. In that sense, the scene where William admits that he killed a Tei Tao "alone," without the aid of Tovar or his slain mercenary colleagues, is a significant reminder of the film's communal ideology: William, as an undisciplined loner, must prove that he's worth just as much as a selfless Chinese soldier.

The film's action scenes also exemplify a sense of precise, shared responsibility that one rarely sees in action-spectaculars. The army works together as a unit, just as the Tei Tao do. You can imagine how hard that philosophy might be to enforce given that it demands a big enough budget to focus on two warring armies' clashing maneuvers. But no, the film's action set pieces are not only thrillingly large-scale, but visually rapturous, despite a preponderance of computer-generated imagery. There are a handful of well-choreographed and well-directed, Damon-centric action sequences, but it's very easy to be seduced by scenes that focus on impersonal warfare. In the latter scenes, the art department flexes their collective muscles with every lionhead-shaped helmet and barbed offensive weapon. Who could remain unmoved after watching a group of individuals dangle, thrust, and throw everything they've got at a legion of deranged-looking creatures?

Unfortunately, the film slows down whenever it becomes a buddy comedy starring William and Tovar. If I had to guess, I'd say that screenwriter Tony Gilroy ("Duplicity," "The Bourne Legacy") was brought on to the film to punch up Damon and Pascal's wobbly scenes of light banter. But there's no spark between the two actors. In these scenes, Damon and Pascal perform time-honored roles that you'll find in many Asian films: the Caucasian performers who look like they wandered onto the wrong set and are unsure of what acting is. Damon orates through clenched teeth, which suits his fight scenes, but makes him sound constipated. Combine that with a weird Irish-inflected accent that presumably is meant to be generically European—his character boasts about fighting in various European conflicts—and you've got a crucial black hole where your leading man should be.

Thankfully, "The Great Wall" isn't really about Damon's character. In fact, it works best when he's part of a group, though he does predictably drift into a leadership role eventually. William's story is an assimilation narrative, after all, one where the hero sees the error of his past and tries to fit into a society that values utilitarian goals over individual needs. "The Great Wall" is unlike any American blockbuster you've seen, a conservative movie with action set pieces that are actually inventive and thrilling enough to be worthwhile. See it on as big a screen as you can.

Into the Dark: The Current Occupant 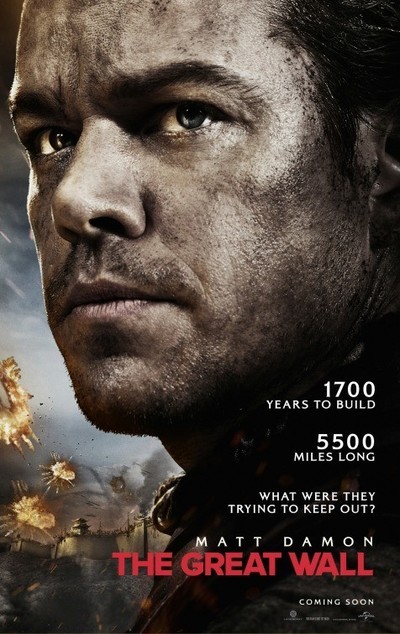 Owning Your Faults: Kris Rey and Gillian Jacobs on I Used to Go Here