Hop in the Way-Back Machine with me, boys and girls, as we revisit the late nineties. There was still a thriving art house scene. Theaters that fit the description made a sizable percentage of their income showing films that weren't capital-A Art—at least not in the sense that "Blue Velvet" and "Last Year at Marienbad" and "The Exterminating Angel" were capital-A art—but were nonetheless witty and handsomely produced, with a generous heart that Hollywood films tended to lack. These small-a art house films had a very mild international flavor. They often starred unknown or barely-known young actors backed by a murderer's row of experienced character actors. A whole subset were about the same thing: people whose old way of life had been destroyed reinventing themselves. "Billy Elliott," "The Full Monty," "Waking Ned Devine," "Brassed Off," and other hits all fit this description. There were just enough to prompt a backlash by certain cinephiles. They griped that the art houses should be reserved for challenging stuff, not films you could take your grandma to see after church or temple or brunch or whatever.

At some point in the aughts, this mini-wave of movies broke and rolled back. But every now and then you come across another, and at the risk of sounding like somebody who's given up on a certain fight—if indeed this subject were worth fighting over—I can say that I'm usually grateful to see a new one. I miss these sorts of films: mid-level indies that are formulaically constructed but filled with astute details, striking scenery, and well rounded characters living in reality. "The Grand Seduction," about a Newfoundland fishing town mounting a wild scheme to draw a petroleum factory, is a film in this vein. It's a remake of "Seducing Doctor Lewis," a French Canadian movie I haven't seen but that I'm told is pretty much the same. The excellent Canadian actor and filmmaker Don McKellar directed; it's his first feature in over a decade. Brendan Gleeson plays the main character, Murray. (Cue the entire world shouting, "I'm in!")

In an opening voice-over, the hero laments that his harbor town has been left behind. The fishing business is dead. Once proud anglers cash welfare checks and drink. One day Murray finds himself in the position to do something, and rises to the occasion with a preposterous scheme. (It'll be familiar to anybody who's seen a certain late-'80s Chevy Chase film that I won't name, just in case you haven't.) The town has been on the verge of luring a petroleum byproducts factory for years, but hasn't been able to close the deal because the company requires that the town have at least 250 adult inhabitants and a full-time doctor with hospital privileges. Murray hears about a young American physician named Paul Lewis (Taylor Kitsch) who's been waylaid on his way home to Los Angeles from a cricket tournament after airport security discovered cocaine in his luggage. The doc has to spend a month in Canada until his case is resolved. Murray gets him to spend his time in the town, figuring that if they can all join forces to make the place seem like an Eden built for Lewis' personal needs, he'll decide to stay, and they'll be able to land the factory.

"The Grand Seduction" doesn't waste any time getting into the nitty-gritty of the town's deception. Its details are marvelously eccentric, verging on the early 21st century equivalent of a Preston Sturges farce. They begin by pretending they're all obsessed with lacrosse, and enlisting a seamstress to throw together cricket uniforms from available swatch of white or off-white fabric, including tablecloths and curtains, and stage a "championship game" atop a rocky cliff in view of the doctor's approaching boat. The scheme grows more complex by the day. There are aspects of illegal surveillance (the guest house where the doctor is staying is bugged), mass roleplaying (residents fake interest in cricket and the doctor's favorite music, jazz) and, ahem, procurement (Murray keeps pressuring the local postal worker, Liane Balaban's Kathleen, to make Paul fall in love with her, but she won't because she finds him shallow and cocky and doesn't appreciate being used that way). Because Paul is culturally dislocated and missing his fiancee in Los Angeles, he never catches onto the fact that he's being played, and crudely at that.

This might read as a description of an insufferably broad film that's trying way too hard. Somehow it doesn't play like that. Why? Maybe it's because McKellar, adapting screenwriters Ken Scott and Michael Dowse and his ensemble cast favor subtlety. The actors put across funny bits with a deadpan reaction or awkward pause, instead of hammering them home by indulging in double takes or hitting key words hard. Gleeson in particular has an uncanny ability to wring laughs from lines that, on paper, aren't innately funny, by delivering them as if they were just another thing to say. When Murray calls a town meeting by exclaiming "Hear ye, goddamnit, hear ye!" or presents the fundamentals of cricket to his fellow townspeople by intoning, "It is your civic duty to study these rules," or innocently inquires of Paul, "Will ya be needin' any cocaine? We're down wit' it," you're watching a master actor teach a less-is-more class.

The other actors are attuned to Gleeson's wavelength. I'm still chuckling at the memory of Paul's crusty pal Simon, played by the great Gordon Pinsent, explaining that watching cricket is "like watching baseball, only longer." Kitsch's role is thankless—Paul is all befuddlement and, in the film's later stage, heartbreak—but he fully commits. The moments when Paul earnestly compliments folks who've been deceiving him for weeks have a perverse edge, because the townspeople don't seem to feel too guilty about the ruse. It's about reviving a nearly dead town; the doctor is but a means to that end. The filmmaking errs on the side of minimalism as well. One of the biggest laughs comes not from a line of dialogue, but a transition: Murray learns that Paul lost his dad at a young age, and we cut from a closeup of Murray thinking to a shot of Murray and Paul fishing together.

For a supposedly feather-light comedy, "The Grand Seduction" is unusually interested in the fate of traditional labor in a cruel global economy. The town's deception of Paul has a metaphorical dimension—all over the world, communities are rejecting their proud pasts and adopting new identities to survive—but it's one that's never emphasized at the expense of laughs and sentiment. The toughness of the plot's resolution surprised me. We don't find out that the oil people are basically decent at heart, nor does the film congratulate itself for siding with the down-to-earth folks in the fishing village. The movie's wise enough to realize that a community that needs jobs often doesn't have the luxury of disapproving of whoever's holding the checkbook. It's more of a jump/how high situation.

This is a contrived and formulaic movie, and the plot doesn't make a whole lot of sense if you think about it for longer than five seconds. But it's graceful and sweet and wise where it counts, and often brilliantly acted, and it made me laugh. If I rated movies based purely on originality, I'd give "The Grand Seduction" two stars, maybe. The extra star is for the pleasure it gave me. 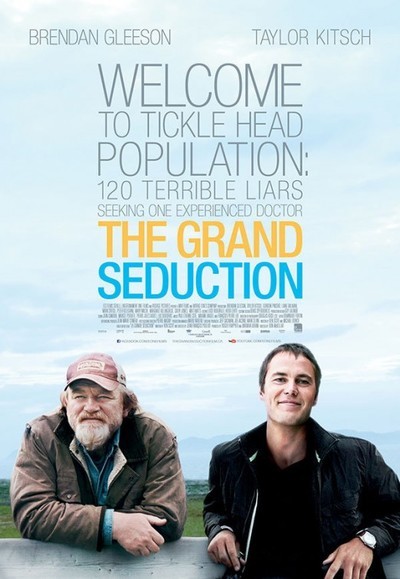 Rated PG-13 for some suggestive material and drug references