In "Thérèse", Claude Miller's final film and his first collaboration with actress Audrey Tautou, an intelligent heiress allows herself to be smothered by her boorish husband and domineering in-laws. She rebels modestly, chain-smoking, and selectively refusing to appear happy for the sake of appeasing her husband Bernard (Gilles Lelouche), a man that she only married for convenience's sake.

"Thérèse" treats marriage as a means of simultaneously dropping out and embracing her marginal role in society. Her father owns a valuable plot of pine forests. So do Bernard's. The two frankly agree to marry to make their already-rich families richer. Therese then writes to her best friend Anne (Anais Demoustier), Bernard's sister, that she wants to marry Bernard because she wants to be saved from the burden of her thoughts. She wants to disappear, but soon finds living with Bernard to be intolerable.

But while Thérèse tells Bernard that, unlike him, she could never easily discern her own motives, Miller usually makes it too easy to understand his heroine. Her problems can mostly be traced to the Desqueyrouxs, a family whose arch insensitivity to Thérèse's feelings make them easy targets for our scorn. The fact that this was, at some point, the life that Desqueyroux chose, and that she accepted married life as a form of self-imposed exile, is not as important to Miller and fellow screenwriter Natalie Carter. They do their fascinating subject a disservice by making her a domestic martyr.

Miller is at least right to foreground Thérèse and Bernard's understanding that they aren't marrying for love's sake. In fact, it's soon revealed that the kind of security she's after is not the kind one traditionally associates with marriage. She is not willful enough to emulate Anne, who wants to marry a man she cares about. Anne's tryst with Jean Azevedo (Stanley Weber), a Bourdeaux native that Bernard nevertheless says looks "Jewish," proves what Thérèse already suspects: it does not pay to stick your neck out in a community where everybody knows, and affects, each other's private affairs.

Unfortunately, the self-loathing implications of Thérèse's decision to talk Jean out of marrying Anne are moot, since Jean was never as interested in Anne as she was by him.

Miller similarly de-emphasizes interesting psychological details like that, and instead prefers to make it seem as though Thérèse's struggles with Bernard are the source of her problems. This is unfortunate since Thérèse and Bernard's relationship is loud enough as-is. Though Miller does a good job of replicating the deceptive placidity of Desqueyroux's homelife, it's easy to understand why, as Bernard later asks, Thérèse despises him.

There are a couple of scenes that establish implied differences in Thérèse and Bernard's points-of-view, like when she looks contemptuously at him as he participates in a local mass (Thérèse is an atheist). But there are many more scenes where Bernard and his family do everything short of spitting on Thérèse to prove their contempt for her, like when Bernard and his servants repeatedly refer to Thérèse as Bernard's dog. So when Thérèse finally starts doing something to get back at Bernard, the shocking nature of her crime is off-set by the fact that he unequivocally deserves it.

"Thérèse" never goes beyond that level of psychological complexity because after a point, Miller and Carter aren't interested in exploring the murky depths of Thérèse 's feelings. Once they've established the stifling social hierarchy that she can never bring herself to either accept or reject, Thérèse's inactivity speaks for her. But that doesn't lend her story an air of mystery as much as it allows her character to languish while the Desqueyrouxs marginalize her presence in their household as much as they can without causing a public scandal.

It only looks like Tautou does a lot with a little in her performance because much of her character's inner life is implied through pensive scenes of her frowning and deferring her gaze. Tautou's worried stare is supposed to be fraught with meaning, and she's a good enough actress to pull that off. But within the context of a melodrama where the impenetrability of actions belie a lack of clear motives, a look doesn't establish an inner universe of meaning, just the space where such a universe should go. 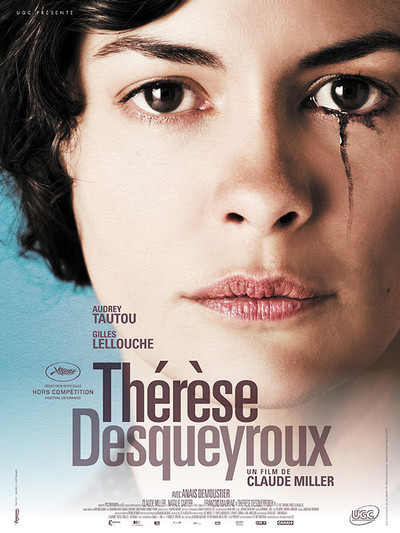