“Star Wars: Episode VII - The Force Awakens” is the film that J.J. Abrams was put on Earth to make, as evidenced by the "Star Wars" echoes in his hit series "Lost,” and the way he kept trying to turn "Star Trek" into "Star Wars." These tendencies could seem cutesy or irritating elsewhere, but they make sense in an according-to-Hoyle "Star Wars" movie. This new one, set 30 years after the events of "Return of the Jedi,” is funny, touching, and surprisingly light-footed. It boasts a lot of familiar elements, including Skywalker family mythology and another Death Star-type weapon, as well as self-aware lines about how things work in this series. The film ultimately runs up against the limitations of its own nature: like the James Bond films, the “Star Wars” movies are pretty much obligated to revisit certain elements, to the point where they might feel played out even if they hadn’t been raided by other films, TV shows and books (including Harry Potter). But it’s still an exhilarating ride, filled with archetypal characters with plausible psychologies, melodramatic confrontations fueled by soaring emotions, and performances that can be described as good, period, rather than "good, for 'Star Wars.'"

And it’s a treat to see beloved older characters placed beside new ones in situations that respect Lucas' myth-making but correct his flaws as a storyteller, including the default whiteness of his casts. Not only have Abrams and his co-writers, Lawrence Kasdan and Michael Arndt, centered the story on a young woman and a man of color (played respectively by Daisy Ridley and John Boyega), they've made them so compelling and quirky that the film never seems to be putting an up-to-date wrapping on moldy clichés. Like all of the new characters, they seem to live and breathe. When they earn the respect of Han Solo (Harrison Ford) and Chewbacca (Peter Mayhew) by improvising a solution to a technical problem, or grab a lightsaber and start swinging, the result is not merely a crowd-pleasing display of heroics; it’s an affirmation that a good movie with a good heart can serve as everyone’s mirror. (Spoilers from here.)

Decades after Darth Vader threw his master down an elevator shaft, the galaxy is still wracked by war. The Republic is still the Republic, but now they're not-too-secretly financing the rebellion against the remnants of the Empire, which has been supplanted by something called the First Order. The Empire went into retreat in "Jedi" when Luke Skywalker (Mark Hamill) turned his father back toward the light side of The Force. But the Empire’s remnants were tenacious. Now that Luke has gone into hiding following a disastrous attempt to train a new class of Jedi, they've gained strength and audacity, and built a variation of the Death Star that’s embedded in a living planet—basically an artillery cannon with intergalactic range. The re-branded Imperials look and sound even more Nazi-like than the villains from the first trilogy. One of the only scenes where Abrams completely overdoes it (which is hard to do in a "Star Wars" movie) is the rally prior to the super weapon's inaugural blast: the supreme commander of the First Order (Domnhall Gleeson) addresses tens of thousands of troops arranged in Leni Riefenstahl patterns, jamming his pasty face into the camera and practically spitting into the lens.

The plot kicks into gear on the surface of the desert planet Jakku. A wisecracking X-wing pilot named Poe Dameron (Oscar Isaac) acquires a fragment of a map that reveals Skywalker’s location from an Obi-Wan-like elder (Max von Sydow, groomed and costumed to resemble Alec Guinness). He hides it inside his trusty droid, BB-8, a rolling ball with a segmented head that can do dandy vaudeville double-takes, only to be captured by the film's chief baddie, Kylo Ren (Adam Driver). Ren is an iron-masked, black-clad, homicidally depressed warrior who flies into room-destroying rages and speaks to the recovered helmet of Darth Vader like Hamlet addressing Yorick's skull. When Ren removes his helmet to reveal Driver's long face and watery eyes, we may feel as though we're seeing the second coming of young Anakin Skywalker, who had good in him but gave in to adolescent power fantasies and let the Emperor corrupt him. “I can have anything I want,” Ren petulantly tells a captive who resists his mental probing.

In short order, we meet the film's other new leads: Rey (Ridley), an orphaned scrap-metal scavenger, and the ex-Stormtrooper Finn (Boyega), a conscientious objector who went AWOL after watching Ren and his storm trooper armada carry out a My Lai-style massacre while searching for BB-8 and his map. Then Rey, Finn and BB-8 escape a strafing run by TIE fighters by piling into Han’s old ship, the Millennium Falcon, which just happens to be owned by one of Rey’s scrap metal customers, and get captured by a freighter that just happens to be piloted by Han and Chewie, who just happen to be searching for the Falcon in that part of space. As in every “Star Wars” film, this one leans on chance meetings and coincidences, and you just have to accept them as the sort of things that would happen in a fairy tale or opera—or at the very least, as proof that the galaxy is smaller than it looks. The Starkiller Base is ten times the size of the last Death Star, but key characters cross paths inside of it so regularly that it might as well be a U-boat.

Lucas' prequels balanced light with gathering darkness, and rhymed scenes, situations and shots with the original trilogy's, to create a sense of history repeating and inverting itself. Abrams and company have done something similar in “The Force Awakens,” but at the level of characterization and scene-building. This is a subtler way to revise (or recycle) elements in a popular franchise while finding something new in them, and it explains why this film feels more fully realized than any "Star Wars" movie since "The Empire Strikes Back"—it's certainly warmer than the prequels, which often failed at characterization and plot even as they served up intricate sequences and haunting images.

The map hidden inside BB-8 is this film's equivalent of the Death Star plans hidden in R2-D2 in "A New Hope"; Jakku is basically Tatooine; other planets evoke icy Hoth from "The Empire Strikes Back" and the tropical moons of "A New Hope" and "Return of the Jedi." Wrecked star destroyers poke up through sand dunes; a leathery-skinned reptilian pachyderm jams its snout into a watering hole; TIE fighters loom against boiling sunsets; a thousand-year old temple crumbles beneath an onslaught of laser bolts. This stuff might seem like fan fiction illustrated by calendar art if Abrams didn't balance spectacle with feeling. Rey is the new Luke, but also the new Han, while Finn is a combination of Luke, Han Solo and a C-3PO worrywart. ("Stay calm," Finn says during a tense walk alongside Poe. "I am calm," Poe snarls. "I'm talking to myself," Finn explains.)  But even though Finn is the film's funniest character, the script never goes so far as to turn him into mere comic relief. Nor does it permit Rey to become a glorified ingenue. Finn and Rey are tormented by believable personal demons and wield their blasters and lightsabers with fervor. You believe they could hold their own against Ren, who can stop blaster bolts in mid-air and spelunk inside prisoners’ minds. And you believe in the reality of CGI'd supporting characters as well, including Andy Serkis' Supreme Leader Snoke, a gollum-esque dictator with a hideous puckered mouth whose hologram image is the size of the Lincoln Memorial, and Lupita Nyong'o's Maz Kanata, a diminutive, ancient pirate whose goggled eyes can see into people's souls.

Elsewhere, Abrams proves that that he's given as much thought to the larger cultural meanings of "Star Wars" as to its iconic characters, gadgets and spaceships. Many film historians have noted the way Lucas's first film, which came out two years after the end of US involvement in Vietnam, flipped that war's script upside-down, making defeated Americans identify with “rebels” who were essentially Vietcong-like guerrillas, and root against an industrialized military whose literally-scorched-earth tactics were all too Western. A shot of a storm trooper roasting a hut with a flamethrower brings the original trilogy’s Vietnam obsession full-circle (to Iraq, maybe), even as the dogfights—many of which are conducted within planetary atmospheres—reconnect "Star Wars" with the propellers-and-goggles adventures that enthralled Lucas as a child. Like the movie’s countless references to other “Star Wars” setpieces—including both Death Star battles, the Dagobah tree scene from “Empire,” and the creature menageries of “A New Hope,” “Jedi” and “Attack of the Clones"—the historical allusions never overwhelm the basic story, which is very much in the spirit of the 1977 original: a bunch of nobodies end up saving the galaxy, with a mighty assist from a wise elder.

These films are a part of American history, cinema history, and our personal history, all at once. The new faces up there on the screen are as compelling as the familiar ones because they remind us that in the world of “Star Wars,” as in our world, life goes on no matter what. 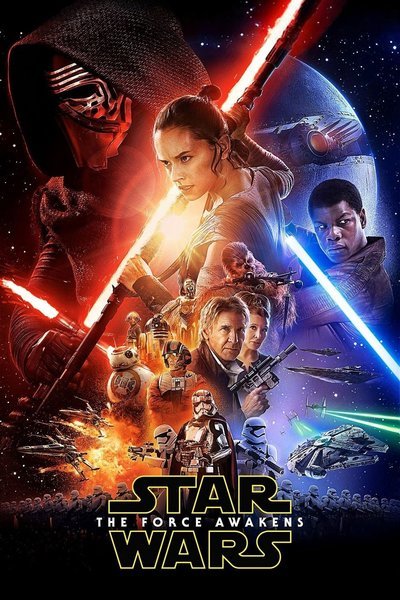