The connection between the legendary George Mallory and renowned climber Conrad Anker, one of the subjects “Meru” is more than just historical. Believe it or not, Anker is the man who found Mallory’s body on Mount Everest in 1999, which made headlines around the world. Anker also seems to wholeheartedly subscribe to the theory captured by Mallory’s three most famous words: “Because it’s there.” In that oft-quoted phrase, so much of the human desire to surmount the impossible is captured. Although the quote is often misinterpreted as a way to offer proof of inconsequential reasons to do what logic tells us we should not. Another interpretation is that there aren’t words to capture why people go to the Moon, come back from the brink of death, or climb Mount Everest. They just do. Because it’s there. The men of “Meru” tried to go to a place that all common sense dictated they should not. They tried to climb a sheer wall that no one had ever climbed before. Their story is undeniably interesting. However, and this is the tricky part about reviewing documentaries, the movie about that story is flawed. A bit too much time is spent in admiration and hero worship over the indefatigable will of these men, when it is the footage on that mountainside that matters. It’s a story that speaks for itself, and so the emphasis on talking heads explaining it to us is dispiriting.

The Shark’s Fin on Mount Meru has long been the ultimate prize in mountain climbing. It is a ridiculous creation of Mother Nature, perched over 20,000 feet above the Ganges River and essentially flat and straight-up. It is not a mountain; it is a wall. At the most challenging part of its ascent, climbers often travel 200 meters in ONE DAY. That’s the inch-by-inch progress it takes to get to the top. And if you plan poorly or merely get hit by bad weather, you better turn around if you ever want to see your family again. As explained in the film, it is the anti-Everest in that there are no Sherpas. No help. No one to do the grunt work. You are on your own climbing a smooth, featureless face.

In October 2008, Conrad Anker, Jimmy Chin (credited with co-directing “Meru”) and Renan Ozturk tried to tackle Meru. They filmed much of the perilous journey, and this material is easily the strongest in “Meru.” When the filmmakers stop the musical score and stop the narration, and simply allow us to listen to the wind and the snow pummeling these men, the physical challenge is palpable. The trio failed in 2008. In a remarkable scene, they look almost close enough to the summit to touch it, but they figure out that the sun will set soon, they have nowhere to camp, and they would not survive the conditions. They look like they literally could throw something to the top, but they have to turn back and go all the way back down. They were 100 meters away.

Defeated, it looks unlikely that the trio will go back again. In an interesting footnote not given enough attention, Jimmy reveals that it was the failure of another group of climbers to reach the top that really got him thinking about attempting it again. There’s something so attractive about being the first. Risking your life to be #2 isn’t as exciting. And so after some remarkable speed bumps are placed in their way but surpassed, the trio takes another shot at it.

“Meru” works best, by far, in its “You Are There” moments. You hear heavy breathing, the elements whip the tent, and it sounds like the world is ending. At one point in the first climb—and it’s really why it failed—they are stuck, literally, on the side of the mountain for FOUR DAYS, as the elements made it impossible to move. Why would anyone do this? Negative 20 degree weather in the shade. Why do it beyond “Because it’s there”? “Meru” doesn’t really go into that, which would be fine, if it didn’t spend so much time talking about mountain climbing. The film is weighed down with interview footage, a lot of which is essentially fan service—how great these guys are, how courageous they are, how tough they are. And I’m not arguing they’re not, just questioning the cinematic value of such an approach. “Meru” is billed as an awe-inspiring nature documentary, and it works best when it remembers to be one.

The One and Only Ivan 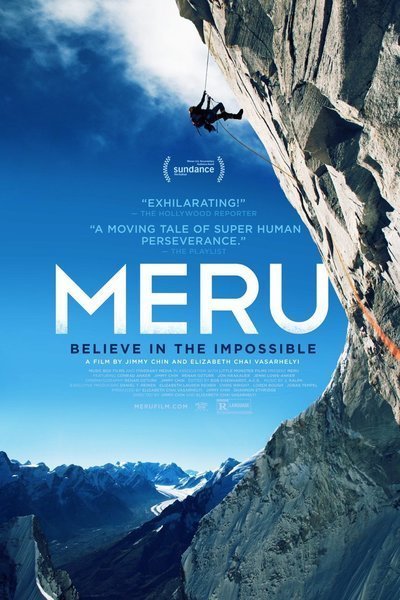 Conrad Anker as Himself

Grace Chin as Herself

Amee Hinkley as Herself

TIFF 2020: Violation, Shadow in the Cloud