One journey, full of hope, turns into the start of an aching search for answers in Fernanda Valadez’s “Identifying Features.” This artful Mexican drama begins when Jesús (Juan Jesús Varela) tells his mother Magdalena (Mercedes Hernández) that he is going north to the United States with a friend for a job opportunity. But months pass, and there’s still no word from him. Finally, Magdalena ventures out on her own journey to find out what happened to her son.

In many movies about immigration, the story often follows those on that journey towards a hopefully better place. The friends or family left behind may have some screen time at the beginning but they soon fade into the background as our hero or heroes move on. In “Identifying Features,” we see the concern and worry of a mother left behind, one forced to leave the comforts and familiarity of home in Guanajuato in search of her son. This was not her journey to make, but it is one she pursues out of love, despite the odds facing her. Did her boy die in the desert? Did one of the drug cartels get to him? Is the government pushing Magdalena to accept her son is dead, sight unseen, as a sign of a cover-up, or are they an overwhelmed bureaucracy tired of carrying so many unclaimed bodies? Although the film feels subdued—there are no scenes of emotional outbursts and there's only a brief chase sequence that ends almost as quickly as it begins—the movie propels itself forward through Magdalena’s search. "Identifying Features" has a subtle frantic quality, a kind of restraint in bearing witness to the unspeakable horrors facing countless others who must stay silent.

Valadez, who co-wrote the script with Astrid Rondero, balances this dramatic tension by dabbling with magical realism and otherworldly images. Some scenes look slightly distorted or doctored to make the viewer feel the mother’s unease in a visceral way. For instance, there are scenes set by a fire that look oversaturated in red, an intensity burning through the screen just as one character turns to violence for survival. In another scene, when Magdalena consults an indigenous elder to find out what happened to her son, we see what they see: visions of a horned silhouette, a devilish tail backlit by flames burning backwards. It is not a good omen. One morning, Magdalena relives the moment her son came to her to tell her he was leaving. Half of the color is faded out by dirty windows, but he is shown in sharp detail. She is haunted by a moment that now seems to be fading around the edges, but at its center, her son stands frozen in time and memory.

Like in Issa López's “Tigers Are Not Afraid,” the cartel violence that has plagued Mexico in recent years is transformed into a fantastical force of evil. People are afraid to acknowledge it or even speak its crimes aloud. Everyone is taught to accept its forced presence in their lives. There’s a scene at a bus station where Magdalena is trying to get answers when a kind stranger tells her what may have happened to her son through the door of a bathroom stall. It’s as if the ladies’ room was the only safe space away from men and their violence. This force feels almost supernaturally powerful when the woman says the bus company has lost entire buses and passengers, only their luggage arriving at the station. Often, Magdalena is helped by whispers and warnings, guiding her impossible search.

This trail of breadcrumb-like hints also layers in a texture of hushed fear to the film. In her travels, she meets Miguel (David Illescas), a recent deportee from the United States who reminds her of her son. On his journey back south, he crosses the militarized border in what feels like an entrancing Emmanuel Lubezki-esque one-take. The camera follows Miguel’s back as he and others walk towards Mexico through a cold concrete tunnel. After some tight bottlenecks and slight crowding, he looks to be on his own path walking in the dark night air. Then, he looks over his right shoulder at the blurry sea of red taillights lined up to cross the border back to Mexico. It’s a visual reminder that the personal tragedies of Magdalena, and now Miguel, are just one of countless others. In this moment, Miguel is alone, physically separated from the rest and isolated by his situation.

Growing up as the child of immigrants, I was taught that coming to the States was always a good thing, even if it was tough. It wasn’t until I was older that I fully started to realize the emotional and mental toll it took on a lot of families, and that was if those who left home made it to the other side at all. I noticed the scars between families that were separated by borders, the haunting detachment from everyone you ever loved and everything you ever knew. It is a pain that does not go away easily, if it ever goes away at all. In the hands of Valadez, cinematographer Claudia Becerril Bulos, and the film’s sound team and composer Clarice Jensen, “Identifying Features” peels back that feel-good façade of the “coming to America” narrative for a much more painful reality, one that feels freshly steeped in tears, heartache, and headlines. It is a striking movie that boldly confronts both uncaring governments on either side of the border and the cartels that have warped these areas into the stuff of nightmares, while also mourning the human cost of losing a loved one to uncertainty and the ones who will never make it home again. 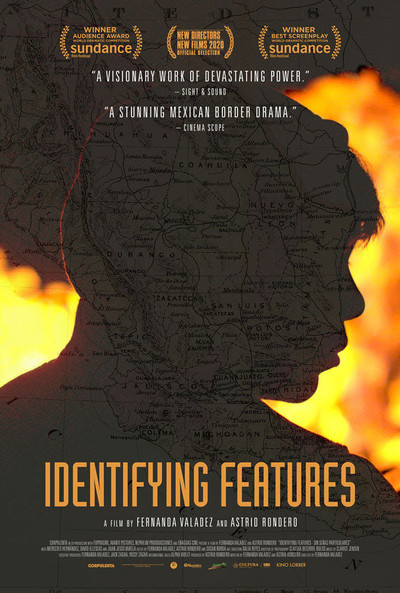