Hillary's America: The Secret History of the Democratic Party

Just over a year ago, not long after being released from the confinement center where he spent an eight-month sentence, author, filmmaker and convicted felon Dinesh D’Souza took to Twitter to offer up his followers a photograph that purported to show a young Hillary Clinton with a Confederate flag prominently displayed behind her. Even a glaucoma victim could tell that it was a fake—a doctored version of a photo of her as a student as Wellesley in 1969 that ran in Life magazine—but somehow this managed to get by him. When he did eventually post a vague correction, he instead advised his followers to make fun of her glasses and hairdo, neither of which appear to be especially outrageous for a Wellesley student in the late ‘60s. Now imagine that photograph—dubiously sourced, factually questionable and suffused with nasty personal cracks instead of any legitimate insight or criticism—and you have D’Souza’s latest film, “Hillary’s America: The Secret History of the Democratic Party,” a work that almost makes his previous cinematic efforts, “2016: Obama’s America” and “America” seem lucid and well-reasoned by comparison. Little more than an extended version of the kind of political screeds that can be found online with only a minimum of effort, this is just a terrible movie, and, depending on the conditions that were set forth, there is a chance it could be considered a parole violation as well.

If you think I'm being gratuitously mean (or giving up a spoiler) by referring to D’Souza as a convicted felon, then you should know that the movie actually opens with him being sentenced to eight months in a halfway house, community service and a $30,000 fine for committing a campaign-finance violation involving getting straw donors to contribute to the campaign of a friend running for the U.S. Senate. According to the film, D’Souza is really being convicted for the crime of having made a movie that dared to expose Obama as a lying, cheating monster hellbent on destroying America. While in the stir—in which he seems to be the only one not convicted of a violent crime—he asks around about the big gangs and how they consolidate their power. After getting a primer from fellow inmate Roc, it dawns on him that what he is hearing is oddly familiar. “What if the goal of the Democratic Party is to steal the most valuable thing this world ever produced?” You know, America!

After finally departing the confinement center, D’Souza knows what he has to do. This requires studying up on the Democratic Party—something that evidently never occurred to him before when he made films about it—and takes him to “Democratic Headquarters,” a recreated location that appears to have had its production design supervised by Tommy Wiseau and which contains a secret basement in which all of their dirty secrets are kept from public view. As it turns out, the Republicans were remarkably forward-thinking in all ways imaginable in regards to things like opposing slavery and the KKK while those Democrats were busy seizing Indian lands, enslaving blacks and taking advantage of women. We learn of the monstrous policies of such infamous Democrats as Woodrow Wilson (who screened “The Birth of a Nation” at the White House) and Lyndon Johnson (whose only interest in passing the Voting Rights Act was to appease Negroes who “are pretty uppity” and to ensure their party loyalty for the next 200 years). At this point, you may be thinking “Hey, didn’t the political parties originally known as the Democrats and Republicans change and evolve over time to the point where the once-conservative Democrats became Republicans and the more progressive Republicans became Democrats?” Not so fast, according to D'Souza—he assures us that nothing of the sort happened and the only reason that Southern Democrats became Republican after the Voting Rights Act was because the South became more prosperous and less racist because of Republican policies. (This factoid is accompanied by a picture of Ronald Reagan, so you know it is true).

The film also takes time to hit a couple of favorite non-elected targets of the conservative movement. Margaret Sanger, the founder of Planned Parenthood, is presented as a character straight out of a horror film, and much is made of a lecture that she gave to a gathering of female KKK members. Of course, the film doesn’t mention that Sanger at the time basically spoke to anyone who would listen regarding birth control (she later described the talk as “one of the weirdest experiences I had in lectures”), or how she was praised in later years by none other than Martin Luther King Jr. Then there is Saul Alinsky, who is portrayed as a criminal monster who worked his way up from scamming cheap meals as a starving student to practically becoming the right-hand man to gangster Frank Nitti, eventually taking the lessons he learned there to organizing liberal types in order to seize power for the socialist agenda by pushing from the outside. Eventually, one of his protégés outdoes him by remarking that if they can somehow take over the government, “Then we can push from the inside.”

That protégé is none other than Hillary Clinton, and after sneaking into the basement of a Clinton recruitment center, D’Souza learns the shocking truth about her as well. By “shocking truth,” of course, the information amounts to “largely discredited crap your uncle sent you on Facebook.” The tenor of this segment is set with D’Souza asking “Is Hillary really capable of enabling a rapist?” and it goes downhill from there as we get another rehash of husband Bill’s infidelities (there are many shots of a woman in a sexy black dress slinking out of various places), Hillary ranting through the halls of the White House, a recounting of that uranium scandal that turned out to be much ado about nothing and the possible depravations of the Clinton Foundation. As for Benghazi, he supposes that she refused to send in help because “she couldn’t figure out how to make a buck off of them.” As this segment ends, D’Souza denounces them for their “hateful rhetoric” before calling them “depraved crooks” who will “turn all of America into a plantation” if she is elected president. At no time, however, does he make any sort of case for an alternative to her in this election cycle. Even though the film is up-to-date enough to include a moment suggesting that Obama was responsible for the massacre in Orlando, there is, at most, one brief and vague reference to Donald Trump.

All of this is conveyed by D’Souza in the most cinematically inept ways imaginable. The film is less a coherent narrative than a compendium of slanders, innuendos, cherry-picked facts, blatant omissions, stuff taken almost directly from his earlier documentaries, terrible historical reenactments, a couple of interviews that convey additional information of a highly dubious manner and ironic clips from movies that you will wish that you had watched instead of this one (including “Metropolis” and “Evita"). From a filmmaking perspective, the whole thing is so amateurishly done that even those who fall close to D’Souza on the political spectrum should feel ripped off. Worst of all, it utterly fails at its mission of being the ultimate Hillary Clinton takedown by never laying a single glove on her. This is especially astounding, as even those inclined to support her could probably name a couple of things she has done in her years in the spotlight that are legitimately questionable—her vote for the war in Iraq and her embrace of the teachings of Henry Kissinger to name a couple—but instead of exploring those, D’Souza is more concerned with calling Bill Clinton a sex abuser but blaming it all on Hillary.

“Hillary’s America” may well be the single dumbest documentary that I have ever seen in my life—nearly two hours of poisonous bluster and anti-historical rhetoric that comes across like the desperate ravings of someone trying to make a few more bucks by rehashing the same nonsense before his gravy train finally leaves town. The closest thing I can compare it to are the strange and highly speculative documentaries that Sunn Classics used to crank out in the late Seventies—movies that breathlessly promised viewers that they would reveal the existence of life after death or the Bermuda Triangle or Noah’s Ark but only gave people clumsy reenactments, interviews with highly dubious experts and wild speculation without ever actually offering any of the concrete proof that they promised. Those films used to get huge audiences, but once viewers caught on to the con, interest dropped sharply. And if the drop in interest between D’Souza’s first two films is any indication (“2016” was a sizable hit but “America” came and went so quickly that he never makes reference to it once here), there is an excellent chance this film will face the same fate. The only intelligent thought the film has to offer comes at the very end when D’Souza admonishes people to go out and vote. Okay, he can’t, but the thought is still nice. 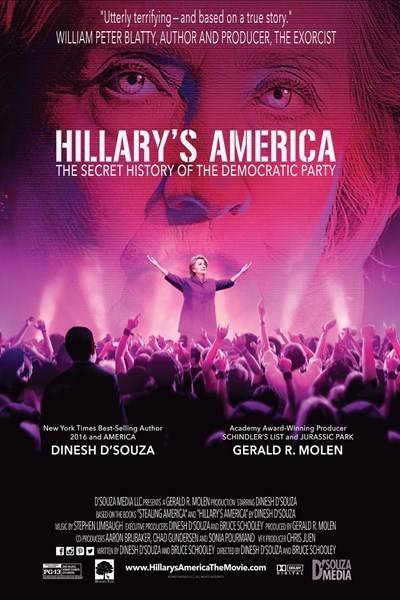 Hillary's America: The Secret History Of The Democratic Party (2016)

Rated PG-13 for some violence, thematic elements and smoking.