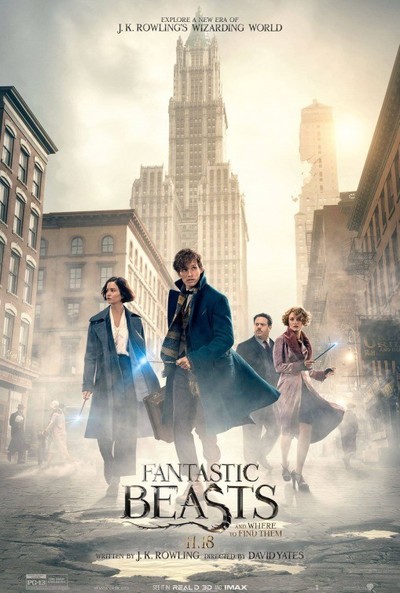 Fantastic Beasts and Where to Find Them (2016)

Ah, distractions. Be it with junk food or Netflix binges, many are craving safe havens away from post-election fallout these days. But what we really need are the right distractions, ones that lift spirits, engage minds, delight eyes and don’t pander to our baser instincts, including those alarming posts that dribble down social media feeds, stirring up unease about the future.

Perhaps a fable embellished with fantasy trappings that’s spun off from the Harry Potter universe. One that touches upon such issues as the inherent danger of outing a magical community to an intolerant public while No-Majs, the Americanized term for Muggles, are equally distrusted by wizards and witches. Some young people are forced to suppress their very natures by those who inflict physical and psychological harm upon them. Not to mention that a strange deadly force has been somehow unleashed, leaving mass destruction and fear in its wake.

OK, that doesn’t sound like that much fun, does it?

But what if I tell you that J.K. Rowling’s “Fantastic Beasts and Where to Find Them,” which dips into the dark side fairly regularly, is at its best when it serves as a more exotic version of all those cute puppy and kitten antics that fill your Facebook, Twitter and Instagram accounts? Instead of dogs sporting holiday attire or cats falling off kitchen counters, you can go “aww” when a naughty Niffler, a mole-duck-billed platypus hybrid, goes on a crime spree while greedily stuffing gobs of shiny objects such as coins and gems into its belly pouch. Or when a majestic giant Thunderbird, destined to live in the wilds of Arizona, spreads its eagle-like wings. Maybe a teeny leafy twig-like critter known as a Bowtruckle, reminiscent of a shrunken Groot from “Guardians of the Galaxy,” is more your style. There’s also an amorous Erumpent, a big-butt cross between a hippo and an elephant, who causes a ruckus at a zoo. That this expansive menagerie and more are able to fit into the best piece of enchanted traveling luggage in a movie since Mary Poppins' bottomless carpet bag is a welcome bonus.

Besides, who better to conjure an entertaining yet relevant remedy for our nation’s unsettled state of mind but Rowling? It was her unfettered fertile imagination that afforded moviegoers comfort and joy in the aftermath of 9/11 with “Harry Potter and the Sorcerer's Stone,” the first of eight big-screen installments based on her mega-selling book series about the exploits of a boy wizard. Yes, there was a monstrous, near-unbeatable evil afoot throughout the franchise. But there was also abundant goodness, profound wisdom and selfless decency to be discovered amongst the wand-waving denizens of Hogwarts Academy of Witchcraft and Wizardry.

Now, 15 years later—and not a moment too soon—arrives this ambitious first entry in a quintet of promised film adventures, directed with more whimsical panache than usual by “Harry Potter” stalwart David Yates. Rowling’s debut as a screenwriter is inspired by a same-named, catalog-style textbook that is supposed to be the work of a “magizoologist” and Hogwarts alum named Newt Scamander (Eddie Redmayne in eccentric shy-guy mode). Prediction: I expect this endearingly clumsy oddball guardian of endangered magical creatures might just become a spokes symbol for animal rescue groups, even if he keeps on having to recapture them after they escape from his suitcase.

Instead of the contemporary academic setting with pubescent schoolkids and imperious wizened professors, the focus is on Newt and his John Candy-class roly-poly sidekick and No-Maj, Jacob (Dan Fogler, a onetime Tony winner and victim of too many dumb bro-coms who buoyantly fulfills his duty as our civilian surrogate). They soon join forces with a pair of sibling spell casters—plucky Tina (Katherine Waterston), an ex-investigator for the Magical Congress of the United States of America (MACUSA for short), and flirtatious Queenie (Alison Sudol), a mind-reading flapper—who both would do Samantha from “Bewitched” proud with their magic-enabled kitchen skills.

The action is rooted in a make-believe New York City during the Roaring Twenties, a period of prosperity and hedonistic pursuits but also repression and intolerance that took such forms as Prohibition and the rise of the KKK. These more frightening impulses of the era materialize in such metaphorical figures such as a puritanical witch-hating Carrie Nation type (Samantha Morton, scowling all the way) who rails against the use of magic to her impressionable young charges. Meanwhile, Colin Farrell glowers as the head of MECUSA security who totes a few secrets up his sleeve and we learn there is the powerful dark wizard Gellert Grindelwald has gone into hiding after causing chaos in Europe.

If that sounds like a lot of ground to cover, it is. There are plot points that rush by without being fully explained and characters who will hopefully become more fleshed out in later installments. As is all too common in blockbusters lately, violence primarily takes the form of destruction of urban landscapes. If you’ve seen one major metropolitan thoroughfare gutted like a fish and spilling forth with chunks of asphalt rubble, you have seen them all. But the actual period re-creation and production design of a Jazz Age Big Apple is quite the accomplishment. I especially enjoyed the foray into a hidden wizard-friendly speakeasy with a sassy elfin blues singer where Newt attempts to strike a bargain with the establishment’s owner, a shady goblin named Gnarlack played via motion-capture by well-cast Ron Perlman.

As with most complicated narratives, it is best to simply sit back at some point and enjoy the ride. You will quickly know if you feel the Potter magic if you smile when a snippet of “Hedwig’s Theme”—named for Harry’s owl—is heard early on the soundtrack or if you suddenly sit up when the name “Lestrange” is mentioned. As Fogler’s Jacob says after learning his memory of all the incredible feats he's witnessed will be erased for his own protection, “I don’t got the brains to make this up.” However, Rowling definitely does. Let’s hope subsequent chapters of the “Fantastic Beasts” story are even better.

Fantastic Beasts: The Crimes of Grindelwald