Through a shocking sequence that plays like an oblique explanation of its title, David Cronenberg’s evasive mind-and-body-bender “Crimes of the Future” cracks open in its early moments, tracing a harrowing crime that gets committed during some nondescript time in the future, in the grim corners of a near-derelict home. It’s a nimble, stylish prologue that functions as a keyhole into the vast and fleshly world the writer/director has erected: a little boy enters a grubby bathroom and starts to devour a trash can hungrily, like a freshly-minted vampire overeager to quench his newfound thirst for blood. Though this betrayal to the human-body-as-we-know-it wouldn’t be the only (or the actual) crime we’d witness. Soon, in an act of desperation, the boy’s repulsed mother would murder her offspring, having just witnessed the boy’s inexplicably inhuman appetite for plastic.

Based on this confidently uncanny opening alone, it makes sense to learn that it was towards the end of the 20th Century when Cronenberg conceived this story, in which our kind has mutated to grow new organs and evolved to make the notion of pain near-extinct. After all, that was the era that defined his carnal brand of cinema—namely, his preoccupations with the human body and the ways flesh intersects with the mechanisms and advancement of modern technology—and more or less ended with 1999’s “eXistenZ,” before concerns of the more visceral kind (of course, still with droplets of body horror) took hold of his filmography on this side of the 2000s. In that regard, “Crimes of the Future” (which shares a title and nothing else with a 1970 picture by the filmmaker) finds “the king of venereal horror” operate squarely in a universe that earned him this aforesaid label: you know, a world made up of the sliced torsos of “Videodrome,” the injured appendages of “Crash,” and the deliciously wicked eroticism that somehow flows through it all.

All these meaty graphic and psychological signifiers are also the blood and guts of “Crimes of the Future,” albeit a bit predictably sometimes. With imagery purposely and all-too-obviously reminiscent of some of the visuals that existed in the master’s previous work, one can’t unsee a certain banality on occasion or shake a fan-service-y inkling. Still, it’s irresistible to see Cronenberg pivot to his classic mode to dissect weighty anxieties around mortality and perhaps even humankind’s inevitable annihilation. If one feels no pain, if there is no cautionary system inherent to our bodies that warns us about our terminal limits, if unknown organs (or tumors) routinely sprout inside of our torsos, would we have a fighting chance to survive in the long run?

It’s a bit heady to consider all this existential apprehension in our (allegedly) post-Covid world where the talk of yet another imminent variant and possible surge is proving to be psychologically crippling. Perhaps all one can do is learn to live with and manipulate the unknown, like the rebellious performance artist Saul Tenser (a stony, mystical Viggo Mortensen) has done. While the celebrity showman confesses to his distaste for what’s been happening to his own body, he at least seems to have managed to make something of his condition in the interim, alongside the former trauma surgeon-turned Saul’s creative partner Caprice (a subtle and sophisticated Léa Seydoux, infusing the on-screen chaos with a swish of calm). Together, the duo have spun the whole process of surgeries into a performative exhibition, perhaps in order to find some meaning and assurance amid volatile unpredictability, or to leave something behind to counter the crippling sense of void. Often, the two conduct live, you-have-to-see-it-to-believe-it kind of surgeries on Saul in front of an in-person audience, pushing his body to its limit for the sake of art. More than once, you hear this process being deemed as a way to open the body up to new possibilities. The thesis goes something like this: if pain is archaic, then the body itself can be molded into art. And what is all that molding, all that operative modification of skin through human hands and inventive surgical machines, if not a new kind of intercourse? What’s an open wound if not an invitation for, well ... oral sex?

Indeed, it’s no coincidence that there is a coital quality in nearly everything Cronenberg caresses with cinematographer Douglas Koch’s sensual camera, unearthing an otherworldly kind of eroticism from the film’s ample machinery, physicality, and grotesquely exposed bowels. Among those who secretly feel that sexiness is Timlin (Kristen Stewart, bringing along some comic relief with her character’s muffled voice and endearingly insecure stance), a bureaucratic investigator from the “National Organ Registry,” tracking new organ growths alongside her partner Wippet (Don McKellar). Like everyone, she is tempted by Saul and Stewart has fun with Timlin’s giving into that temptation like a Ninotchka with a sudden appreciation for opulent indecencies. (Believe it or not, the scene in which the young woman stuffs her fingers in Saul’s mouth is among the film’s tamer moments.)

In fairness, how could she resist all the intrigue? On the other side of the screen, you might find yourself combatting akin urges, desiring to pop inside the picture and if nothing else, feel your way through legendary production designer (and decades-long Cronenberg collaborator) Carol Spier’s blood-curdling imagination. From a hovering, cocoon-like bed with buggy tentacles connected Saul to clanking metals of machines, her creations not only synch up with all-things-Cronenbergian, but wink to the designs of “Alien.”

On the whole, the effort to make heads or tails of the philosophies at the heart of “Crimes of the Future” is a laborious one amid a crowded canvas of players—among them are Scott Speedman’s enigmatic leader and a memorable Welket Bungué’s complicated detective—and open-ended ideas unsure of what to do with themselves. Yes, this operatic science fiction is filled with vague, half-finished stabs at the notions of evolution, societal disorder, and the tragedy that is the vanishing of environmental ecosystems, the ultimate crime committed by mankind. Still, it’s nothing short of overwhelming to ponder these queries amid a parade of eye-popping body horror, from stitched lips and eyes, to ears growing out of every inch of one’s body. It’s not exactly revolutionary, and more alarming than scary. But it’s still provocatively feverish stuff from the dearly missed vintage annals of Cronenberg. 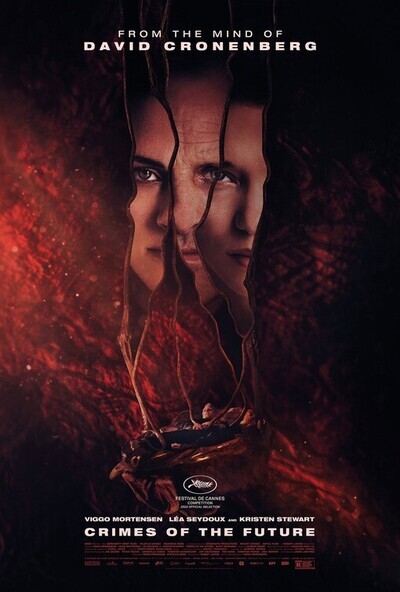