Directed by Jaume Collet-Serra, and featuring a remarkable lead performance by Dwayne Johnson, the spiky and majestic "Black Adam" is one of the best DC superhero films to date. This tale of a gloomy, seemingly malevolent god who reappears in a long-occupied Middle Eastern nation rejects most of the choices that bland-ify even the good entries in the genre. For its first third, it presents its title character—a champion who challenged a despotic king thousands of years earlier—as a frightening and unknowable force with a bottomless appetite for destruction. Known by his ancient moniker Teth-Adam, his reemergence from a desert tomb proves both a miracle and a curse for people who prayed for someone to defend them against corporate-mercenary thugs who have oppressed them for decades and strip-mined their land.

Throughout the rest of its running time, “Black Adam” leans into the inevitability of Adam’s evolution toward good-guy status, condensing the transformation of the title character in the first two “Terminator” films (there are even comic bits where people try to teach Adam sarcasm and the Geneva Conventions). "Black Adam" then stirs in dollops of a macho sentimentality that used to be common in old Hollywood dramas about loners who needed to get involved in a cause to reset their moral compasses or recognize their worth. But the sharp edge that the film brings to the early parts of its story never dulls.

Adam initially seems as much of a literal as well as a figurative force of nature as Godzilla and other beasts in Japanese kaiju films. It’s initially hard for the people in Adam’s path to tell if he’s good, evil, or merely indifferent to human concerns. One thing’s for sure: everyone wants Adam to help them prevent a crown forged in hell and infused with the energy of six demons from being placed atop the head of someone in Intergang, a global corporate/mercenary consortium whose interests are represented by a two-faced charmer (Marwan Kenzari).

Decades ago, Humphrey Bogart played a lot of cynical men who insisted they weren’t interested in causes, then changed their minds and took up arms against corruption or tyranny. Viewers still love that story, and Johnson has updated it many times during his career, most recently in “Jungle Cruise,” in which he played a character modeled on Bogart's riverboat captain in "The African Queen." He channels vintage primordial acting by Sylvester Stallone and Arnold Schwarzenegger but also poet-brute performances like Anthony Quinn's strongman in "La Strada," and infuses the totality with his unique charisma. "Black Adam" confirms that he’s studied the classics and cherry-picked bits that seem to work for him. There are even tenderhearted moments of regret and recrimination that seem inspired by 1950s moral awakening pictures like “On the Waterfront.”

The latter are usually triggered by three “civilian” characters who appeal to Adam’s presumed innate (though submerged) goodness. One is Adrianna Tomaz (Sarah Shahi), a university professor, resistance fighter, and widow of a resistance hero who was killed by the colonizers. Another is Adrianna’s cheerful and indomitable son Amon (Bodhi Sabongui), who zips around the bombed-out city on a skateboard that seems to have as many secondary uses as a Swiss Army Knife. And then there’s Adrianna’s brother Amir (comedian Mohammed Amer), who livens up a standard-issue earthy everyman role.

Somehow, though, the script by Adam Sztykiel, Rory Haines, and Sohrab Noshirvani resists the temptation to wallow in unearned sentiment. Nor does the movie insist, despite the evidence, that Adam and the superheroes brought into to confront him (Aldis Hodge’s Hawkman, Noah Centineo’s Atom Smasher, Quintessa Swindell’s wind-manipulating Cyclone, and Pierce Brosnan’s dimension-hopping and clairvoyant Dr. Fate) are wonderful people who have pure motives and always mean well. In conversations about motivations and tactics, nobody is entirely right or wrong. The movie's edge comes from its determination to live in moral gray areas as long as it can.

It also comes from the violence, which is presented as the inevitable result of the characters’ personalities, ambitions, and duties, rather than being associated with any particular code or philosophy. That framing, plus the sprays of blood and images of people being impaled, shot, and crushed, pushes the movie's PG-13 rating to the breaking point like “Indiana Jones and the Temple of Doom” and “Gremlins” did with the PG rating nearly 40 years earlier. There were several walkouts at the “Black Adam” screening this writer attended, and in every case, it was somebody who brought a child under 10.

In fairness, they may not have expected the movie to begin with a flashback that climaxes with a slave at a construction site getting gut-stabbed and thrown off a cliff, and a boy being threatened with beheading, or for the title character to obliterate an army with electrical bolts and his bare hands seconds after his first appearance. Nearly every other scene—including expository dialogue exchanges—is set against the backdrop of a chaotic city whose residents have been hardened not just by the occupation, but by the catastrophes that are unleashed whenever super-beings clash, which ties into recurring scenes and dialogue about what it means for a small country to be invaded and occupied by outsiders who set their own rules and are indifferent to daily life on the ground.

Film history buffs might note the studio that originated the project: the Warner Bros. subdivision New Line. It rose to prominence with horror films, grew by releasing auteur-driven, down-and-dirty genre pieces and dramas (including “Menace II Society” and “Deep Cover”), and got into blockbusters with the original “Lord of the Rings” trilogy. You can see that lineage reflected in many scenes and sequences of this film, which is PG-13 in fact but R in spirit. “Black Adam” immediately announces what sort of film it is by weaving in quotes from the Rolling Stones’ “Paint it Black” (the melody of which is referenced in Lorne Balfe’s score) and musical as well as visual snippets from “The Good, The Bad and the Ugly”—key works from artists whose best work invites you to root for people who move through their worlds like threshers.

The film’s director honed his mayhem chops in horror movies, then in R-rated thrillers in which Liam Neeson brutally dispatches adversaries. Collet-Serra makes a PG-13 film feel like an R by cutting away or jumping back from the nastiest violence, but letting us hear it (or imagine it when people watch from a great distance). He also does it by insisting, through actions as well as dialogue, that individuals, even superhuman ones, do things for multiple, often contradictory reasons. (A boy’s bedroom is filled with superhero posters and comics, and when a “good guy” and Adam fight in there, they burn and tear through DC’s most recognizable icons in a way that rhymes with scenes of the city's historic monuments being toppled or pulverized.)

Fidelity to basic film storytelling keeps "Black Adam" centered even when it's doing ten things at once. The film is packed with foreshadowings, setups, payoffs, twists, and surprises, and is filled with well-defined lead and supporting characters. One standout is Brosnan, who delivers a moving portrait of an immortal who is tired of seeing the future and thinking back on his past. Dr. Fate looks at those who can live in the present with a mixture of melancholy, wisdom, and envy.

Another is Johnson, who has real acting chops but in recent years has often seemed to be constrained (maybe intimidated?) by his lucrative image as the people’s colossus. He’s as minimalist as one could be when playing a god. He takes a lot of his cues from the screen star that the film quotes most often, Clint Eastwood, but he also seems to have learned from action-hero performances by stars like Neeson, Toshiro Mifune, Stallone, Schwarzenegger, and Charles Bronson, who understood that the camera can detect and amplify faint tremors of emotion as long as you act with the film—not just in it, and never against it. The peak is a fleeting moment when Johnson lets us know that something deep inside Adam has changed by glancing in a different direction and softening his features. It's maybe half a second. It’s not the kind of acting that wins prizes because if it’s done well—as it is here—you feel as if it happened in your mind rather than on the screen.

The politics and spirituality of the movie are just as committed and consistent. Even when the story flirts with Orientalism or incorporates simplistic Western heaven-and-hell imagery, “Black Adam” never loses track of what Adam represents in our world: autonomy, liberation, the possibility of redemption and renewal, and a refusal to be defined by however things have always been done.

The result sometimes plays like the DC answer to the pop culture quake that was “Black Panther,” serving up a Middle Eastern-inflected version of the Marvel film’s Afro-Futurist sensibility, and letting its setting stand in for any place that was colonized. But its politics are more clearly defined and less compromised. “Black Adam” is staunchly anti-imperialist to its marrow, even equating the Avengers-like crew sent to capture and imprison Black Adam to a United Nations “intervention” force that the people of the region don’t want because it only makes things worse. The movie is anti-royalist, too, which is even more of a surprise considering that the backstory hinges on kings and lineage.

"Black Adam" is a superlative and clever example of this sort of movie, coloring within the lines while drawing fascinating doodles on the margins. In its brash, relentless, overscaled way, Collet-Serra's film respects its audience and wants to be respected by it. "Black Adam" gives the audience everything they wanted, along with things they never expected.

Only in theaters today. 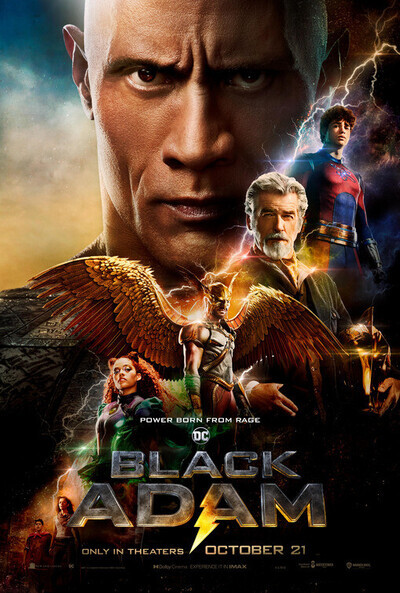 Rated PG-13 for sequences of strong violence, intense action and some language.