Azure sky, clear waters, and a blindingly-white beach surround the all-inclusive Dominican resort where a French-Cameroonian woman named Emma (co-writer Clarisse Albrecht) unwinds at the beginning of the Dominican Republic’s Oscar hopeful “Bantú Mama” from director and co-writer Ivan Herrera. Her relaxation is cut short when she receives a phone call saying a dubious meeting has been moved up a week today. Suddenly she’s checked out, her luggage thrown into a sugar cane field, and back at the airport with an identical case and a little excess baggage. When things go awry after she’s arrested, Emma finds herself rescued by a trio of semi-orphaned kids who hide her in the most dangerous neighborhood in Santo Domingo.

Through this setup, writer/actress Albrecht uses her own experiences living in France, Guinea-Bissau, Mozambique, and the Dominican Republic to explore the inexorable cultural connections between Africa and the Caribbean. Director Herrera proves to be an apt partner, bringing a strong visual acumen to the film, creating a lively world, and coaxing unforgettable performances from a cast of mostly first-time actors.

Through visual cues and smart dialogue, the film hints at the pull between the worlds that reside within Emma. She shares her apartment with a parrot named Coco, her walls decorated with traditional raffia masks. As she leaves for the airport she spins a bronze statue, its arms outstretched as if reaching in two directions. Later, an immigrant working at the resort braids Emma’s hair. While chatting Emma says she’s from “France ... and Cameroon.” The woman responds, “I would love to go to Africa one day.” “Me too,” she replies, a wistful look on her face.

How and why Emma has found herself smuggling drugs is left intentionally obscured, though cross-cutting to visions of another idyllic ocean implies it’s a means for Emma to make her dream of Africa a reality. Albrecht’s psychologically complex performance renders total clarity unnecessary. We’re in it with her as she waits for her flight to board, when security randomly pulls her aside, and again when she’s arrested. Herrera keeps his camera focused on Emma, centered in the frame, her face projecting all her fears and dashed hopes.

Although the means of Emma’s escape and later discovery by T.I.N.A. (Scarlet Reyes) and her older brother $hulo (Arturo Perez) is a bit contrived, her connection with the kids is natural and unforced. Reyes in particular is a force of nature as a girl who has had to grow up and take charge of her life, and that of her brothers, way too young. Euris Javiel as Tina’s youngest brother Cuki gives one of those authentic kid performances that transcend precociousness, serving instead the honest sweetness that children of that age naturally possess.

Awaiting some falsified papers and transport to a French-associated island like Guadalupe, Emma bonds with the children, whose mother is out of the picture and whose father has recently been jailed. Over breakfast on their first day together they learn of dishes shared by both their cultures. While discussing Africa, Cuki asks how she can be French and Bantú at the same time, to which she responds “One doesn’t exclude the other.” She teaches T.I.N.A. how to wear a scarf in her hair “like a queen.”

As she brings African culture into their lives, all three children brighten and begin to dream of a world across the Atlantic where more possibilities might await them. Yet, even with these dreams across the ocean ever present, the film takes care to show that Santo Domingo has a vibrant culture of its own. Emma shops for fresh food at an outdoor market. T.I.N.A. and $hulo observe boys riding dirt bikes through the streets. Unfortunately, also present throughout the neighborhood are drug raids and callous cops who frisk people on the street for their identification, rounding them up if they do not.

Although she’s grown a tough exterior for herself, T.I.N.A. knows the future has already been written for her and $hulo. But through their connection with Emma, a new path may have formed for the gentle Cuki, and she’s willing to sacrifice everything to make that future happen for him. The scenes in which T.I.N.A. makes her plans for her brother clear to Emma allow both Albrecht and Reyes to showcase their capabilities for raw and complex emotional depth. In their final scene together, Herrera holds on Reyes’ face, her eyes like the ocean reflecting great sadness and great hope simultaneously.

It’s no accident that the sea is shown as a savior throughout the film. The sea brought T.I.N.A.’s family to the islands, just as they brought Emma’s to France. The sea connects both places, and to the coast of Africa. It’s a bittersweet connection, fraught with a bloody past, but also the possibility of a brighter future. Cinematographer Sebastian Cabrera Chelin captures its contradictory nature throughout the film, displaying its bright blue hues during the day and its shimmering darkness at night.

Ultimately, “Bantú Mama” is a film that finds the light in the darkest place, preferring to believe in hope above all else. Co-writers Albrecht and Herrera have a deep connection to its setting in the Dominican Republic, to the island’s past, present, and its future. They also deeply feel the ever-present current of African culture that persists throughout the post-colonial diaspora. They see the beauty and the complexity of feeling as though you belong in two places, to two cultures equally and at the same time. 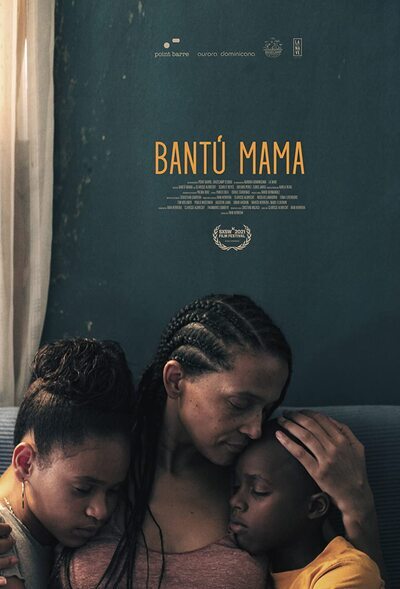 Donis Taveras as the Lawyer